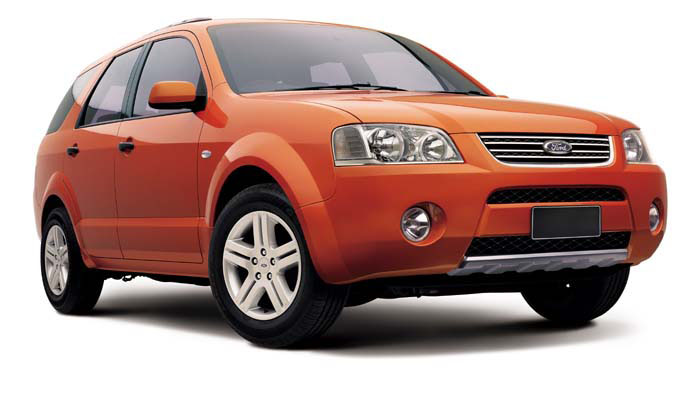 Traditionally, the show bookends a week of automotive fever in Melbourne with the season-opening Formula 1 Grand Prix taking place next weekend (March 9), a mile or so further away on the edge of the downtown area.

While the high-revving state-of-the-art F1 fliers were still winging their way south, the Motor Show opened on a high note with Ford Australia’s home grown Territory SUV revealed in production-ready form ahead of its on-sale debut this time next year.

Designed by Scott Strong during his tenure as head of design at Ford Australia, the Territory will remind many U.S. observers of the Freestyle SUV Ford previewed at Detroit.

Strong moved back to the U.S. in time to pen the Freestyle having just finished the initial renderings of the Territory. Despite the external similarities, Ford Australia’s vehicle will share little with the Freestyle as it is based on the domestic Falcon platform.

The Territory is Ford Australia’s first home-grown all-wheel drive wagon and though the relatively compact size and seats-for-seven accommodation seems quite right for many overseas markets, Ford Australia President Geoff Polites continues to refute export possibilities for the five-door.

It has not yet been engineered for left-hand drive, but could be converted if Ford finds a market, not that it needs it for the business case, executives continue to affirm.

Polites says the Territory should collect 30,000 domestic sales a year, small beer by U.S. standards, but enough to push the Melbourne-based factory to a new shift pattern, assuming it does not steal all its sales from the Falcon sedans or conventional station wagons the factory currently builds.

Ford also whipped the wraps off its Falcon GT and GT-P models, high-performance sedans that extract 390 hp from the 5.4-liter V-8 equipped with four valves per cylinder and a continuously variable camshaft timing system.

GM’s Holden is running on the highest octane available at present. Posting a 54-year all-time sales record of 178,392 vehicles in 2002, The General’s Down Under team plans 14 new model introductions in 2003, including a One Tonner pickup derived from its home-grown Commodore sedan - the four-door that spawned the Monaro (Pontiac GTO in the U.S.).

The tray-back ‘Ute’ is a new addition to the family that previously only featured a full-sided recreational-style utility body with far inferior carrying capacity but independent rear suspension.

Now fitted with a separate rear load carrying chassis connected via a stiff torque tube to the back of the cabin, running a live axle and leaf springs, the One Tonner comes with 3.8-liter V-6 or 5.7–liter Gen III V-8 power and automatic transmission.

Holden last produced a tray-back Ute in 1985 but with undiminished howls of protest still ringing in the ears of executives, Holden caved and farmed out the engineering of the tray-back to TWR Engineering. The result is a 1052-kg carrying capacity that will be the darling of tradesmen across the continent and probably the Middle East (Holden’s huge export market) and possibly even the U.S.

When GM product czar Bob Lutz signed off poste haste on the Pontiac GTO project more than one year ago, he also got to drive the regular Utility, and emerged grinning. He pronounced it ideal for Chevrolet — though they didn’t know that then. The tray-back Ute could also find a niche in any potential export order. 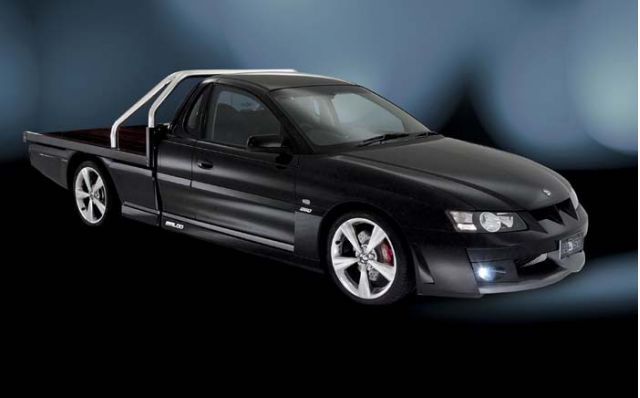 The Maloo Ute has a 260kW Gen III fitted under its snout with a Jarrah timber load bed that can carry a substantial payload, polished sport bars and 19-inch alloy wheels. Performance will be shattering.

Holden also showed its pre-production Ute-derived Panel Van. Essentially a fibreglass canopy atop a regular ute, this is powered by a 235-kW version of the Corvette’s 5.7-liter Gen III.

Jumping into the car-derived Ute market for the first time was Toyota Australia, fronting the show with perhaps the most significant display of its in-house design and build talents in the shape of the X-Runner (pronounced Cross-runner).

Toyota Australia is pitching TMC for its own research and development centre because it too has vast pans to supply Camry, Avalon and 4WD Highlander or derivatives to lucrative Middle Eastern and Southern Hemisphere markets.

Toyota is flexing its styling muscles to try to win approval for the Avalon redesign because it doesn’t want the U.S. model (no offence, guys).

The X-Runner Ute Toyota dreamed up is built on a 150mm stretch of the Avalon platform and fitted with the all-wheel drive running gear of the defunct Lexus RX300. It also boasts a supercharged 3.0-liter V-6, a production version of which Toyota executives would like to bolt under the hood of a special sporty Camry, soonest.

The rear tray sits on a specially constructed space frame engineered in Melbourne, while the Dunlop tires have a laser-cut tread pattern in the form of the Toyota logo.

The swing out tailgate contains a cubby for helmets, while side lockers can hold biker Lycra and the load bed swallows two mountain bikes.

X-Runner is an expression of the enthusiasm of the Toyota team and its desire to tap into the unique Aussie lifestyle.

Toyota Australia presently builds global market products (Camry, Avalon) for domestic and export markets but TMCA president, Ken Asano said it was important for Toyota Australia to “undertake projects that enhance our capabilities and our ability to be innovative”.

That’s Toyota speak for “Holden and Ford are heading into the SUV market and we don’t want to be left behind”.

Engineered in Australia, the Magna AWD is a canny local re-engineering job (the Japan-sourced AWD kit wouldn’t easily mate to the 3.5-liter V-6). MMAL says it has no plans to engineer the AWD car for left-hand drive applications, now.

A substantial sheetmetal facelift model, bearing the new ‘face’ of Mitsubishi as prescribed by chief designer Olivier Boulay in Tokyo, will be revealed mid-year, before debuting as a 2004 model in the U.S. this fall.

Suzuki Australia enjoyed an unusual world first ripping the wrapping off what will become the Ignis Sport, a tiny three-door sports hatch with a power-to-weight ratio superior to some BMW models, the company claimed.

Powered by a feisty 82kW 1.5-liter engine, the Sport will help recover buyers of go-faster hatches who deserted in droves after the death of the Swift GTi in the mid-1990s. The car will also be revealed in Geneva later this week.

Daihatsu, Toyota’s micro-car building experts, revealed a new generation Charade micro hatch, essentially the new Cuore model powered by a 989-cc three-cylinder engine. According to officials close to the company, Charade is set to become Australia’s cheapest car when it launches within weeks. This could mean a psychological barrier-breaking sub-AUS$10,000 (US$6000) ticket, offering petrol-price aware motorists a Japanese-built car that’s cheaper than anything from Korea.

Still with three-cylinder cars, Mercedes-Benz Australia introduced the two-seater Smart City coupe and cabriolet to the Australian market, six years on from the French-built brand’s European launch. Priced from a stiff US$13,100, the company hopes to find 300 buyers this year claiming 100 orders are already inked.

Peter Nochar, managing director of Volkswagen A.G. owned Volkswagen Group Australia announced at the show Spanish brand SEAT would have another crack at the Australian market after unceremoniously departing in 1999 after a fraught four years. Czech-brand Skoda is also on its way back after a somewhat lengthier 20-year absence.

Still in the VW family, Bentley executives gleefully proclaimed 100 Australian orders in the bag (globally 3000) for the Continental GT, with deliveries due to start late this year.

Also on the comeback trail is Land Rover’s Defender 90 short-wheelbase hardtop diesel-powered 4WD, reintroduced after 23 years, though quite why is not completely clear.

Another 4WD making news was the Subaru Forester. The Australian-market high-spec XS Luxury Pack complete with side-airbags is the first Japanese-built car in the world to be awarded a five-star NCAP rating, thanks to a recent 29-km/h side pole impact test carried out in Japan.

Adding a seat-belt warning buzzer and the side-airbags was enough to qualify the Forester for its fifth star after an Australian NCAP test last December secured four-stars.

And finally, you might be wondering what has become of the third of America’s Big Three, in Australia.

Chrysler struggles here because it has little right-hand drive product. The Neon fell on the exchange rate sword last year (it was also out of its depth dynamically), while the PT Cruiser is too quirky and pricey.

Chrysler locals have authorised a RHD conversion program for the old Viper and the Crossfire concept car was on show, ahead of local sales starting before Christmas. But it is still too little.

A jolt in the arm for sales would be a badge-engineering deal with MMAL’s Magna product, or the arrival of some big RHD Chrysler sedans. What about it, guys?