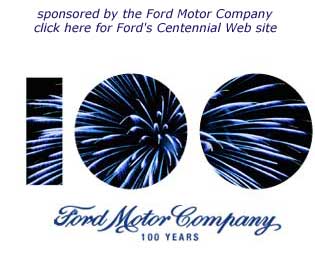 CRAZY ABOUT A MERCURY? 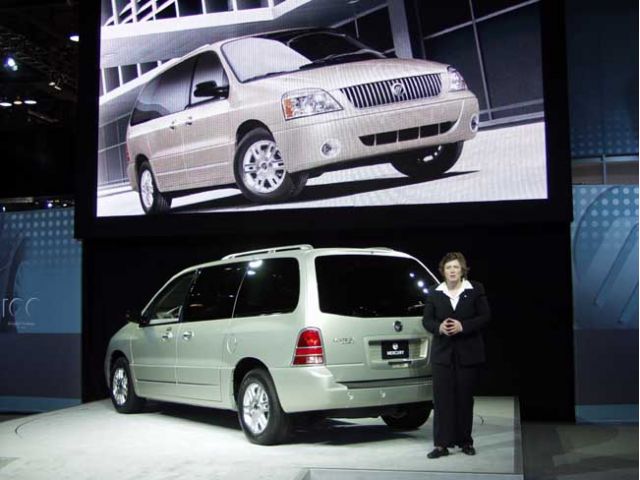 That’s certainly what the troubled Ford division needs to hear buyers humming as it starts a much-needed roll-out of new product. “We’re here to relaunch the Mercury brand,” announced Group Vice President Jim O’Connor, as the marque rolled out the new Monterey minivan. Based on the popular Windstar, but featuring styling cues lifted from the Mercury Mountaineer SUV, the minivan replaces the old Villager model. The 4.2-liter V-6-powered Monterey will boast such touches as sonar parking assist, heated and cooled seats, the first rollover airbag system offered in a minivan, and fold-flat third-row seats.

The new minivan will debut next autumn and by 2006,  it will be followed by three other new products, including a small SUV and two midsize sedans. One of those, codenamed D258, will share platforms with the upcoming Ford 500 sedan. The automaker provided an animated preview during their Wednesday event of the Mercury version, which will be marketed as the Montego. —TCC Team

TOYOTA TURNS UP THE HEAT WITH BIGGER TUNDRA 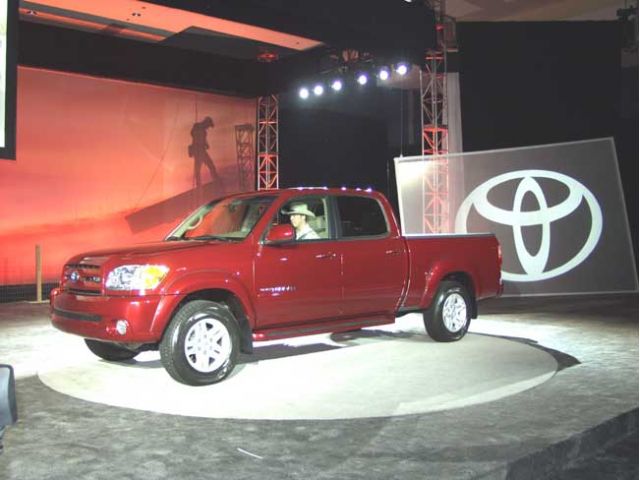 Boasting it’s even bigger than the comparable Ford F-Series, Toyota pulled the covers off its new Tundra “Big Rig” Double Cab during the opening session of the Chicago Auto Show.  Compared with the current Toyota full-size pickup, the Big Rig has a full foot longer bed that’s also four inches deeper. Overall, it’s 13 inches longer than a conventional Tundra two-door. And it will be loaded with a range of standard features delivering “the comfort of a full-sized SUV,” said the division general manager, Don Esmond. Among the more interesting additions is the industry’s first power-operated sliding rear window. It opens up to four times the space of the Tundra two-door’s manual window. Toyota also reviewed its plans to build Tundras at a new $800 million assembly plant near San Antonio in 2006. It will have the capacity to produce 150,000 trucks a year, which could nearly triple current Tundra production. The first Japanese maker to enter the full-size segment, Toyota has yet to make a serious dent in the sales of its domestic rivals. The Japanese maker has a 4.4-percent share of the huge market, less than half its overall U.S. market share. But eventually, Esmond said, he believes Toyota could boost the truck share up to parity. —TCC Team 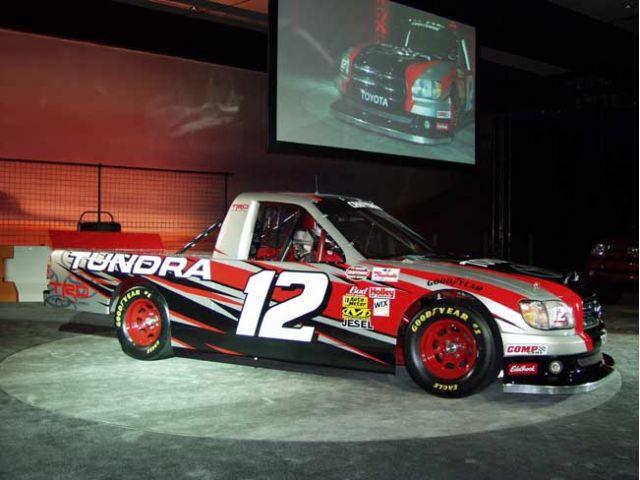 Toyota’s taking its trucks to the masses. The automaker intends to sign on for a run in the NASCAR Craftsman Series pickup races, starting with the 2004 Daytona season kick-off. “It looks fast. I sure hope it will be,” said Toyota Vice President Dave Illingworth, as he introduced the Tundra Race Truck during Wednesday morning preview. The automaker hopes to field as many as six Tundras during the ’04 season. Toyota is getting more and more serious about its role in racing, and will support five teams in this year’s Indy Car series. That includes Team Penske, which has claimed the most wins of any team to race at the legendary Indianapolis 500. —TCC Team

The new Mitsubishi Lancer Evolution will be priced at $29,000 when it reaches showrooms later this month, Pierre Gagnon, Mitsubishi North American chief executive officer, told a press conference at the Chicago Auto Show — but "people expected it to be more than $30,000," said Gagnon. The all-wheel-drive, turbocharged, 271-horsepower Evolution is in a class all by itself, he argued: only one other vehicle, the Subaru WRX, which sells for $5000 less, even comes close to the Evolution, he said. Mitsubishi expects to sell 4,500 Evolutions this year and another 6000 next year, he added. —Joe Szczesny

RALLIART ADDS POWER TO BASE LANCER 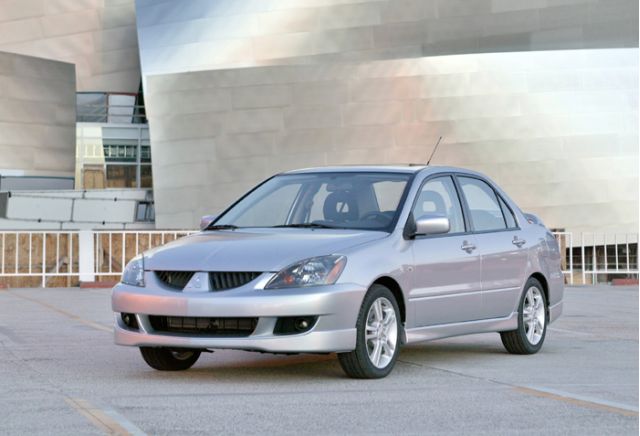 The Lancer also has been restyled for 2004 model year, Gagnon also said.  Mitsubishi's recent success has dictated that the U.S. will be the first market to get the restyled Lancer, Gagnon added. One of the first of the new Lancers to reach the market will be the Lancer Ralliart, a 160-hp version of the Lancer which is described as a performance sedan that will fit neatly into the niche between the Lancer O-Z Rally Sedan and the Evolution. “Considering its long list of standard equipment and improved performance, we expect the new Lancer Ralliart to attract consumers as a value-laden package with an attractive price starting under $18,000,” said Gagnon. —Joe Szczesny

“SS IS BACK” WITH IMPALA AND MONTE CARLO 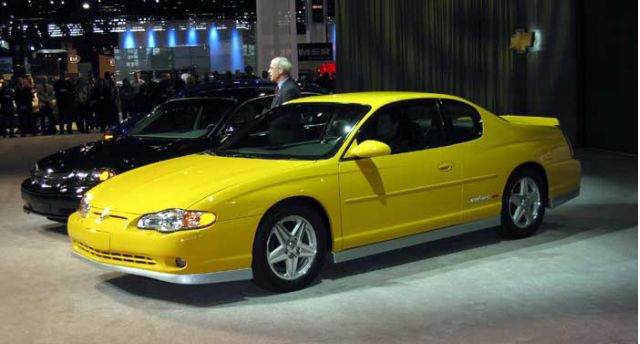 With an avalanche of new product for 2004, Chevrolet is trying to position itself once again as “America’s favorite brand,” says Chevy division manager Kurt Ritter. The tried and true way to do that, Chevy seems to be arguing, is through horsepower. The bowtie’s new SS passenger cars bring a whiff of that legendary power back to these venerable nameplates, though this time the power applies to front-drive vehicles. Chevy says the Impala SS and Monte Carlo SS will be out in the 2004 model year with unique wheels and tires, sport trim and independent suspensions, and most important, supercharged 240-hp V-6 engines with 280 lb-ft of torque. Chevrolet expects the vehicles to contribute 30,000 additional units to the brand’s sales numbers. —Marty Padgett

AVEO COMING TO CHEVY VIA KOREA 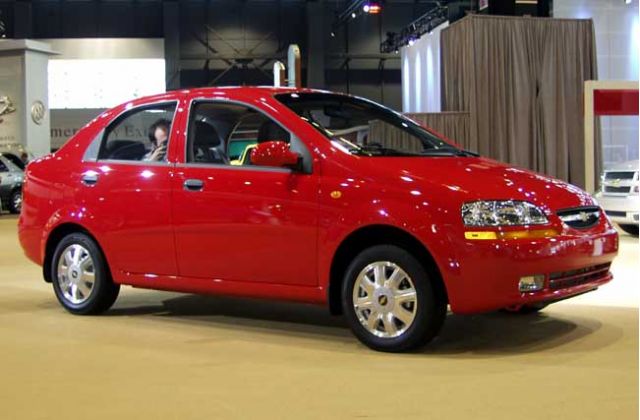 At the bottom of its lineup, Chevy is adopting some models made by the GM-Daewoo joint venture as the new 2004 Aveo. The Aveo comes as a five-door hatchback or four-door sedan and pricewise and sizewise, compares with the Hyundai Accent and Kia Rio. Chevrolet promises the Aveos will offer base and LS versions, powered by a 1.6-liter, DOHC 16-valve engine with 105 hp. Daytime running lamps, intermittent wipers, rear defogger and tilt steering are standard; an automatic gearbox, anti-lock brakes and a CD player are options. Chevy is counting on the Aveo for an additional 70,000 vehicle sales when it launches for the 2004 model year. —Marty Padgett 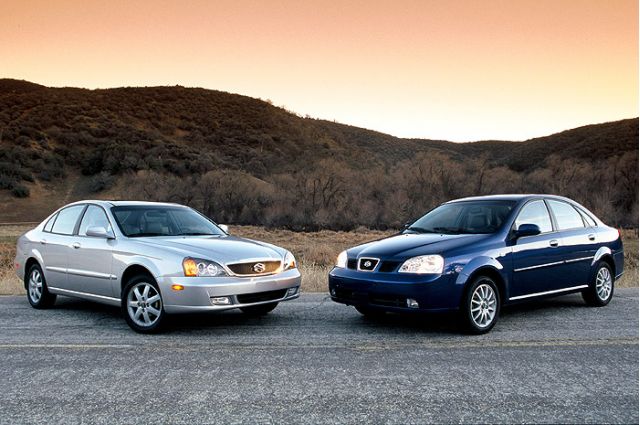 Suzuki’s lineup is expanding for the American market — even more than it has, considering the brand has doubled its U.S. sales in the past five years. Two new sedans will help Suzuki reach its new goal of tripling current sales in five years, executives say. The vehicles are the Forenza and the Verona, both of which originate from the GM-Daewoo joint venture in which Suzuki is a ten-percent shareholder. The Verona sports Italdesign duds and mid-size proportions that puts Suzuki in the same ranks as the Toyota Camry and Honda Accord, though not on price. The Verona (on left) is powered by a unique transversely mounted, 2.5-liter in-line six with 155 hp, and gets a four-speed automatic as its sole transmission. Power windows, mirrors and door locks, stereo controls on the steering wheel and a six-speaker CD/cassette stereo are standard. The Verona gets a sticker ranging from $16,000 to $19,000. The 2004 Forenza is a compact sedan sized like Honda’s Civic, powered by a 2.0-liter, DOHC four with 119 hp. The Forenza comes standard with in-dash CD player with cassette and eight speakers, four-wheel disc brakes, and a pricetag between about $12,000 and $15,000. —Marty Padgett
Tags:
Audi August Chicago Auto Show Marketing wait Auto Shows Industry
2021
The Car Connection
See the winners »
2021
The Car Connection
See The Winner and Nominees »