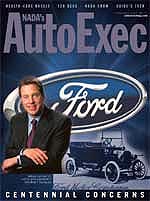 The NADA convention is on in San Francisco, bringing dealers to the forefront of an auto industry in transition. Stay with TCC for more from NADA, and to get continuous coverage from the convention, click over towww.autoexecmag.com.

Why Taylor is optimistic about 2003:

• The number of vehicles per household continues to grow.

• Unemployment is still at "a reasonable rate."

Taylor also predicts a continued hot market for used vehicles, particularly certified. Light trucks, which now account for more than half of all new-vehicle sales, will continue to be swept along by the popularity of the smaller crossover utility vehicles (CUVs). And automakers will begin shifting from interest-rate incentives to cash incentives as rates begin to creep back up. —AutoExecMag.com

The National Automobile Dealers Charitable Foundation (NADCF) today presented a check for $1 million to Scholarship America to aid families of September 11 victims. The money will be distributed to two funds.

One is the Families of Freedom Scholarship Fund, which provides scholarships to spouses and children of people killed or permanently disabled in the attacks, and which will pay out the money over the next 25 years. Whereas most of the contributions after September 11 were for immediate needs, the Families fund was designed to help with long-term needs, said Marilyn Rundell, Scholarship America’s vice-president of scholarship management services.

The second fund designated for NADCF’s contribution—the Families of Freedom 2: Building Futures Through Education Fund—provides scholarships for families who lost income because their Lower Manhattan businesses were destroyed or impaired.

All awards will be based on need.—AutoExecMag.com

General Motors will update two existing minivan models and add two more for 2005, announced John Middlebrook, the automaker’s vice president and general manager of vehicle brand marketing. Speaking at the annual convention of the National Automobile Dealers Association, Middlebrook said the Chevrolet Venture and Pontiac Montana will be completely updated, while new models will be added, for the first time, to the Buick lineup. An all-new Saturn minivan is also on the way, which GM believes “will help us reach young buyers as well as import-oriented buyers.” The automaker believes the minivan market will stabilize, at about 1 million units annually, but it may also try some unusual design features to overcome resistance in the market to vehicles often derided as “Mom-mobiles.” Meanwhile, Middlebrook told dealers GM has also given the go-ahead to the Hummer H2 SUT. Short for Sport-Utility Truck, it’s a version of the big H2 ute with a short pickup bed on the back that was first shown on the auto show circuit in 2001.

“STOP WHINING” AND GET USED TO IT, DECLARES WAGONER

General Motors dealers are applauding an announcement by CEO Rick Wagoner that high-level incentives are effectively a permanent part of the automaker’s marketing strategy. “It’s time to stop whining and play the game,” Wagoner declared during a session of the J.D. Power and Associates International Automotive Roundtable. High incentives helped GM gain share for the second year in the row, even while increasing profits, the exec said, adding that since “GM’s strategy is working very well for us…this year, we’re going to keep pushing.” That’s just fine with Glenn Ritchey, a GM dealer from Daytona Beach. “We’ve raised a generation of consumers who’ve gotten used to rebates and incentives. But we’ve also raised a generation of salespeople used to marketing with rebates and incentives.” But other GM officials acknowledged that the cost/value equation could change, the longer the automaker plays the game. “Pure cash on the hood does have diminishing returns,” said John Middlebrook, GM vice president and general manager of vehicle brand marketing. For their part, competitors also seem resigned to GM’s incentive equation. “He’s right,” Ford Chairman and CEO Bill Ford said of Wagoner, “You have no choice but compete.” The big challenge, though, will be to ensure that the number two automaker can offer matching levels of incentives and maintain the necessary spending levels on product, Ford stressed “all at the same time.”

More than a third of a century after the City by the Bay’s original Summer of Love, there’s something of another love-fest going on, and it pairs two unlikely partners: automakers and dealers. While both sides had a few contentious issues to discuss during the annual convention of the National Automobile Dealers Association, there was nowhere near the contentiousness of past years. “From where we were three years ago to where we are today is a tremendous turnaround,” suggested William Bradshaw, a GM dealer in Greer, S.C., General Motors is, in particular, now averaging a bit above average in the NADA dealer attitude survey, but there’s been a general improvement in relations between manufacturers and retailers, according to industry insiders. Of course, it helps that dealers are, on the whole, reporting earnings at or near record levels. But there’s also a recognition that carmakers can’t go it alone, said Bill Ford, noting his company’s ill-fated attempt to get into the retail side of the car business. “In the ‘90s, some of us manufacturers thought we could do a better job selling vehicles ourselves,” he said. “We found out we couldn’t and that we’d do better when we cooperate, rather than compete.” After years of antagonizing dealers, Ford said the industry is now improving relations, but cautioned, “It’s a long grind.”

Imports and domestics typically mix like oil and water, or perhaps cats and dogs. But Toyota’s top American executive, Jim Press, had some nice words for General Motors, crediting his Big Three rival with “saving the American economy after 9/11.” Accepting a Distinguished Service Citation from the Automotive Hall of Fame, Press added that “I don’t think General Motors got the recognition it deserves.” But the AHF’s annual event, timed to coincide with the NADA convention, did provide some recognition for GM CEO Rick Wagoner, who was named Industry Leader of the Year. Wagoner seemed to take in the spirit of the moment when he acknowledged that members of the auto industry “focus too much on splitting up the pie and getting our own piece, rather than working together.” “We’d all be better off” taking a more cooperative approach, Wagoner suggested. That apparently did not refer to GM’s “aggressive” approach to incentives and market share.

CAN YOU SAY “EXOGENOUS”?

That’s the $5 word one heard a lot over the weekend at the NADA convention. The real danger to the auto industry is “an exogenous shock,” or one from outside that carmakers can’t control, warned Ford Chairman Bill Ford. The big concern underlying this year’s dealer gathering is the likelihood of war with Iraq. “Outwardly, dealers are happy, but inside, they’re a nervous wreck,” said consultant J Ferron, head of the automotive practice at consulting firm PriceWaterhouse Coopers. Until the crisis in the Persian Gulf is resolved, industry officials added, it will be tough to make any real forecasts for the coming year, and even to do any serious planning. “If we’ve been in overdrive the last few years,” said Ferron, right now, “we’re in-between gears.”