GM REPORTS $1.7 BILLION PROFIT
General Motors Corp. boosted its earnings nearly four-fold during the last three months of 2002 as strong sales and a continuing emphasis on cost cutting produced strong results. The giant automaker reported it earned $1 billion, or $1.71 a share, during the fourth quarter, compared with $255 million, or 60 cents a share, in the same period a year ago as revenue climbed to a record $48.7 billion. For 2002, GM earned $3.9 billion or $6.98 per share, excluding the impact of Hughes Electronics, on the automaker’s bottom line. With Hughes in the mix, GM earnings totaled $1.7 billion or $3.35 per share. Read more about the results inside TCC today:
GM Earns $1.7 Billion in 2002
FERRARI PREPS RACER FOR GENEVA 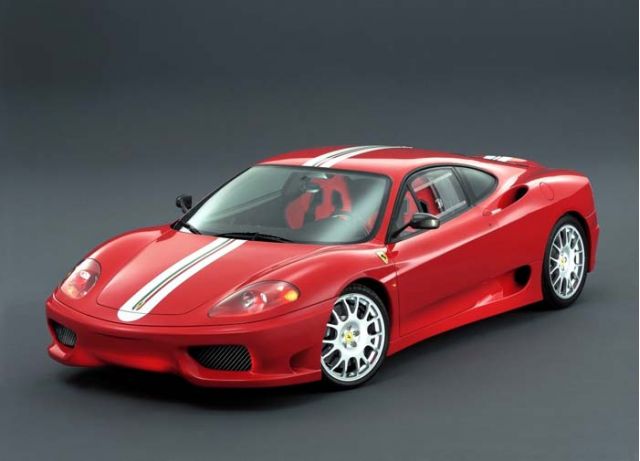 Ferrari has started the run-up to March’s Geneva Auto Show by releasing a picture of its new Challenge Stradale model, which will be unveiled at the show. Based on the 360 Modena and 360 Spider eight-cylinder cars, the Challenge Stradale (Road Challenge) brings some of the qualities of the cars used in Ferrari’s one-make racing series to road drivers. Over the past few years, the Ferrari Challenge race series have become established in the U.S. and Europe as popular and competitive events for amateurs driving cars prepared by Ferrari dealers.

The 360 is also used by competitors in the international FIA GT series, and Ferrari says that the Challenge Stradale is further evidence of the company’s policy of building road cars that are directly derived from race cars. The road car is significantly lighter than the standard 360 models and has uprated brakes as well as aerodynamic aids based on those of the race cars. The gearbox is based on F1 technology.

The engine is the same 3586cc V-8, with five valves per cylinder and titanium con rods, which secured a worldwide success to the 360 Modena and the 360 Spider. The all-aluminum body and chassis are from the 360 Modena.

The Geneva show car will be finished in a new Ferrari color, Rosso Scuderia, which is the same as that used on the Grand Prix cars. A touch of tradition comes in the nose to tail racing stripes, first used on customer Ferrari race cars in the early 1950s. –Ian Norris
Spy Shots: ‘04 Quattroporte
DAILY IN DEPTH

Dealers and consumers are responding to the wave of all-new or highly restyled 2003 and 2004 models with enthusiasm that refutes forecasts of a severe sales slump this year, according to a high-powered panel of dealer leaders and factory executives at the Automotive News World Congress earlier this week.

“Consumers are in the best position ever to afford a new car or truck,” declared Michael J. Jackson, the new chairman and CEO of the largest megadealer AutoNation, Inc., a 280-dealership network based in Fort Lauderdale, Fla. “Dealers all across the U.S. have proved how resilient they are. This past year they weathered all the bad news and prospered as never before,” he added. AutoNation grossed more than $20 billion last year as the number-one auto-retailing network.

Jackson’s optimism was shared by UnitedAuto Group’s president and COO, Samuel X. DiFeo, who said internet-using customers are helping enhance dealers’ customer-satisfaction ratings even as products improve in styling and durability. Bloomfield Hills, Mich.-based UAG has grown to a $7 billion annual business with 148 dealerships, including a new 40-acre mall in Scottsdale, Ariz., offering ten luxury brands. DiFeo said the mall reflects a nationwide trend among dealers to reinvest in new facilities, another sign of the auto markets’ strength. Jackson and DiFeo applauded automakers for their aggressive incentive programs on new vehicles, improving product quality and durability and launching certified pre-owned programs that have helped market off-lease and trade-in units.

Senior sales vice-presidents of GM and Ford, Pete Gerosa and James G. O’Connor, agreed that despite all the technological advances, such as the Internet, the central force in retailing cars is “product appeal” plus dealer salespeople’s ties to customers. “That’s unchanged,” said Gerosa. “Whether the dealership is a megastore or a mom-and-pop shop, those are key selling tools. It’s the strength of the franchise system that keeps that relationship essential.”

O’Connor conceded that Ford made some moves to shore up dealership relationships that had soured several years ago, indicating the automaker has resolved not to repeat initiatives such as buying stores or staging auctions on the internet.

But the power of the Internet as a sales channel was emphasized by eBay’s vice-president and general manager, Simon Rothman. With approximately 300,000 used cars and trucks sold on eBay last year, independent and franchised dealers accounted for most of the volume. “The average dealer spends about $500 in ad or auction expenses and commissions to sell a used car,” Rothman stated. “The savings on eBay is 75 percent or more, so we look for continued growth.” –Mac Gordon

XM Satellite Radio, America's leading satellite radio service, will be available as an option on several key Acura and Honda models, Honda announced. Scheduled to be released in the spring of 2003, the 2004 Acura RL will be delivered with XM Satellite

Radio hardware as standard equipment. This will be followed by the all-new 2004 TL sedan in the fall. For Honda products, a dealer-installed option will be available in the spring on the 2003 Accord and Pilot. The Honda Division of American Honda expects to have XM Satellite Radio factory-installed beginning with the 2004 Accord.