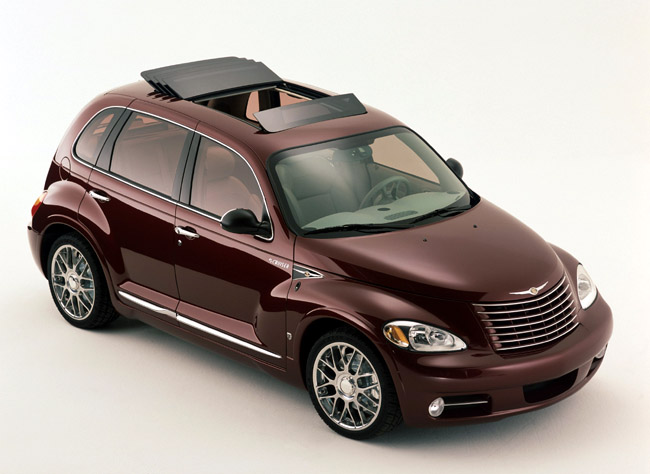 Get it all: 2002 SEMA Show Coverage (11/6/2002)
Chrysler plans a new approach to aftermarket speed that involves putting its in-house Mopar parts organization in every showroom, the company said this week at the 2002 Specialty Equipment Marketer’s Association (SEMA) show in Las Vegas.

At issue is Chrysler’s desire to offer the “coolest cars on the road,” according to Jim Schroer, Chrysler’s VP for Global Sales, Marketing and Service. The company will get to that rarified stratosphere in a few ways, including adding the Mopar parts bin into the showroom experience, and developing new vehicles that pull in the bleeding-edge enthusiasts as well as the more mainstream buyers interested in vehicles just a little different from stock. 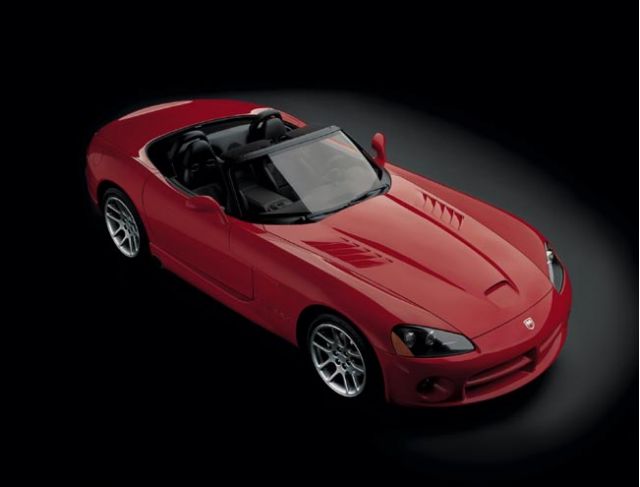 The first part of the plan has been in public view since last year’s auto shows. The new Chrysler Group Performance Vehicle Operations (PVO) has shown its future models — the 500-hp Ram SRT-10 and 215-hp Neon SRT-4 — and has put one vehicle on the streets, the 500-hp ’03 Viper SRT-10.
To follow up on those factory efforts, Chrysler has partnered with aftermarket tuners to create a second tier of enthusiast show cars — those that can be put together with Chrysler’s blessing but not with their maxed-out engineering teams. And finally, Chrysler will put its own aftermarket parts and accessories brand into more dealerships under the Mopar Speedshops brand, which the company hopes will boost its share of the aftermarket profit — and get its owners into the do-it-yourself mindset.

At SEMA, the Chrysler Group prodded the media into seeing their products as “phine,” “phat” or otherwise “schweet” through the efforts of its Vehicle Excitement Team (VXT), which is charged with getting cars and trucks into the hands of tuners to create specialty concepts for shows like SEMA.

Earlier in the year, Chrysler said it would get its tech specs into the hands of tuners earlier, so that it might be considered among the tricksters who’ve made the Focus and Civic the darlings of the post-dealer experience. And this year, the VXT put 40 of the company’s vehicles into the hands of tuners to prep for the Vegas show as they try to connect with younger buyers. 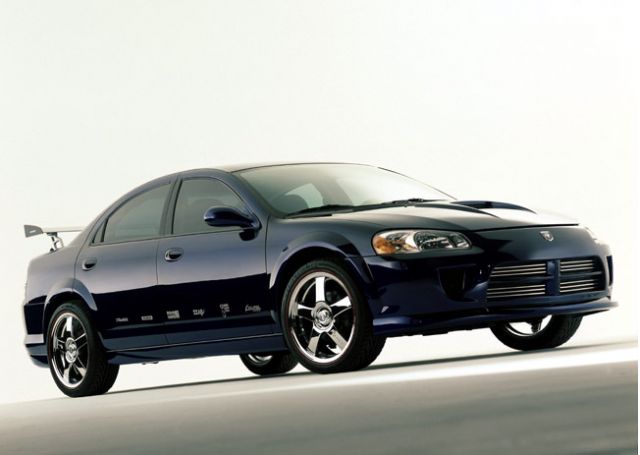 The results of all these efforts spawned three vehicles from within Chrysler itself, including the Dodge Stratus Turbo, which features a 240-hp, 2.4-liter turbo four with 260 lb-ft of torque. The concept vehicle also gets a tuned suspension with R/T badging, a five-speed manual transmission, better brakes and twin exhausts with chrome tips. On the front end, a new fascia and a hood with a functional scoop blend into a huge aluminum rear wing and big 18-inch race wheels. The interior is wrapped in leather as is the MOMO steering wheel.

Already popular with the wood-paneling crowd, the PT Cruiser has been transmogrified into the Super Cruiser, powered by a 300-hp iteration of the 2.4-liter four-cylinder and stocked with racing harnesses and seats and a carbon fiber hood. Eighteen-inch forged aluminum wheels wear Michelin Pilot Sport Cup street-legal races and a rear spoiler hops on to the roofline. Inside the 22-inch LCD video screen and 875-watt sound system and standard Xbox game unit can be removed for racing.

Last among the home-grown projects is the PT Big Sky (shown above), an all-wheel-drive Cruiser with a five-panel glass sunroof tinted to match the color of the body. Borla twin exhausts, chrome trim and 18-inch BBS wheels complement the Merlot paint like a good wine color should, while the interior is styled in pearl leather and outfitted with four LCD video monitors and a reconfigurable cargo system.

Best of the rest:

Of the 40 vehicles produced by selected tuners, a few seemed more likely to see practical use or production: 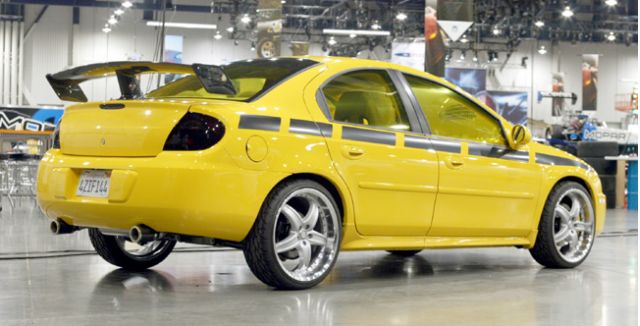 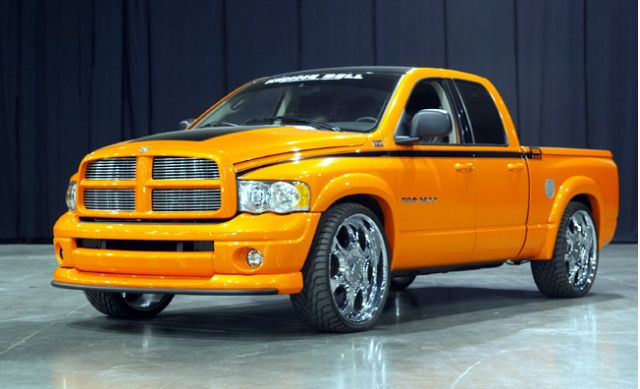 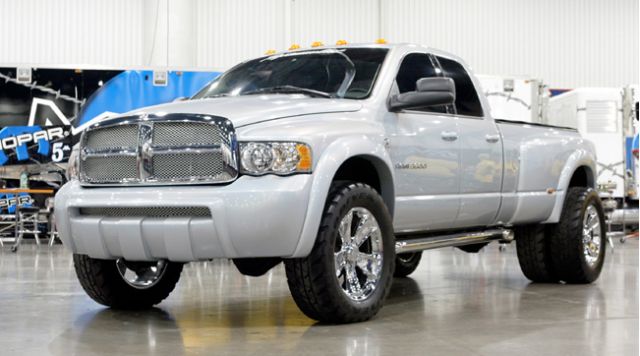 Performance West Dodge Ram 3500 Cannonball Express:This Cummins-powered trucklet pumps out 370 hp, 750 lb-ft of torque and puts it down to earth through 22-inch Oasis wheels and 38-inch Goodyear tires. The interior gets stainless-steel trim and a navigation system. 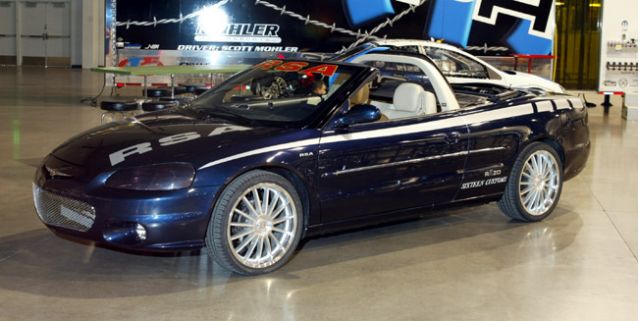 Racing Sports Akimoto Chrysler Sebring Convertible Luxury Tuner:Maybe the sexiest Sebring droptop ever, this ragtop gets a supercharged version of the stock 2.7-liter V-6. Stainless steel brakes, Eibach suspension bits and Borla exhausts top off the package underneath; on the outside, an Erebuni body kit gets packaged with 20-inch chrome wheels.


American Expedition Vehicle Jeep® Wrangler Scrambler:Your average rock crawler doesn’t come fully fleshed out from Jeep, nor does it come with a truck bed. This modified Jeeper goes overboard to compensate for whatever shortcomings it might have, including the elusive hillbilly factor. The 190-hp in-line six engine is basically stock except for the snorkel; the overall length, stretched 24 inches to add a pickup bed, is not. Sixteen-inch wheels and tires mate with Dana 44 axles and a custom hardtop.