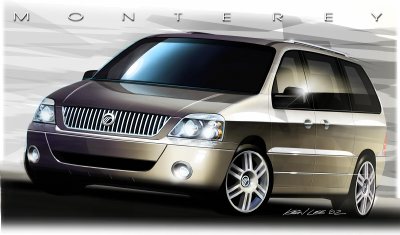 MERCURY SHOWS MONTEREY SKETCH
After confirming the coming presence of a new Mercury minivan a month ago, Ford announced yesterday that the new Mercury Monterey minivan would compete in the $30,000 luxury minivan niche behind the power of a 4.2-liter V-6 and class-leading safety equipment such as a three-row side airbag curtain. The Monterey, due in late 2003 as a 2004 model, will sport a third-row seat that flips and folds to create a flat load floor in back, like the seats in the Honda Odyssey, Mazda MPV and Ford Expedition. Power adjustable pedals, forward and reverse object-sensing systems, and a tire-pressure monitoring system will also be standard on the luxury minivan.
MERCURY by Bob Plunkett (9/15/2002)

WINDSTAR GETS IMPROVEMENTS, TOO
As Mercury preps for the Monterey, Ford will release its own version of the improved minivan, again under the Windstar name. Ford says the 2004 Windstar, due at the end of next year, will get revised styling and a new interior complete with a folding-flat third-row seat. It will carry over many features introduced as standard this year, like Ford’s AdvanceTrac electronic stability enhancement system and better NVH.
Ford Makes Changes in Crown Vics by Jim Burt (9/30/2002) 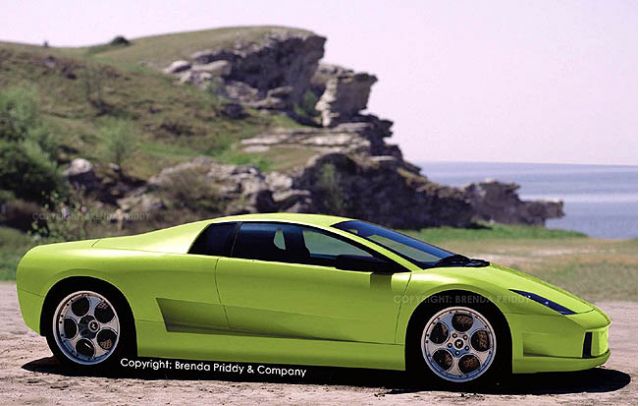 GM DELAYS DELTA AGAIN
General Motors’ star-crossed plans for a new assembly plant outside Lansing have been pushed back again, with GM executives now saying the new state-of-the art factory won't open now until 2006. Gerald Elson, GM vice president and general manager of vehicle operations, said one part of the $1 billion-dollar complex in Delta Township, Mich., will open next year. However, GM will not start construction until 2004 of the new assembly plant that is at the heart of the complex that sprawls across 1300 acres off I-69. GM has controlled the site since 2000 and originally expected to have the complex in service by the autumn of 2002 in time for the 2003 model year.
GM Delays Lansing Plant Again (10/7/2002)

LOS ANGELES FIRST WITH FUEL CELLS
Honda says the city of Los Angeles will be the first customer for its FCX fuel-cell vehicle, due to be released in limited numbers this fall. The fuel-cell vehicle, shown around various auto shows, is being introduced to the city’s employees as they prepare to take delivery of five FCXs this winter. “Hydrogen-powered fuel cell vehicles hold great promise for future clean air vehicles and it’s important that Los Angeles play a leading role in development and early use of this technology,” said L.A. Mayor Jim Hahn at the announcement of the sale. Earlier this year, the FCX became the first vehicle to earn Federal and California certification as a zero-emission vehicle.

WILL ISUZU GO VIRTUAL?
Reports in the Japanese media say Isuzu may dump its share of the joint-venture plant it shares with Subaru in Indiana, and become the first Japanese maker to field a lineup of SUVs for America without actually building them. The Nihon Keizai Shimbun daily says Isuzu is considering “streamlining” production of its SUVs at the Subaru-Isuzu Automotive Inc. plant in Lafayette, Ind., or selling off its share of the plant and contracting production of its vehicles to Subaru. Isuzu only confirms to Reuters that it is “looking for ways to make production more efficient.” Isuzu is due to replace the aged Trooper SUV with a version of the GM mid-size, long-wheelbase sport-utes by year’s end.
2003 Chevrolet TrailBlazer EXT by Sue Mead (9/30/2002)

Normally, October has been marked by a new-car sales upswing as the formal dawning of a new-model year. But this year, 2003 models have been on sale since January, and the falling leaves no longer mark October as the month when dealers roll out all their newest models in one fell swoop.

Moreover, this October comes on the heels of a decided downturn in September sales after the blistering pace of August, and the talk of an impending U.S. invasion of Iraq has raised concerns over a potential impact on the new-car and truck market.

Despite incentives averaging more than $3000 on new vehicles and renewal of popular zero-percent loans by the American brands, September sales of 1.25 million vehicles skidded nearly half-a-million units from the August high. Automakers, all busy rolling out a raft of freshly-styled models, are bullish as always, calling September an “aberration” due to low stocks of 2002 models.

But the clouds of war inject an increasingly unpredictable factor into the mix, just as the auto show season gets underway. Show turnouts will be watched closely to gauge whether the ‘Cassandras’ or ‘Pollyannas’ are right. —Mac Gordon
Sept. Sales: Signs of Slowdown (10/7/2002)

The first application of BorgWarner TorqTransfer System's Interactive Torque Management I system (ITM-I(TM)) will provide maximum performance and enhanced security in on-demand four-wheel drive for the Hyundai Santa Fe, beginning this month. Volumes are expected to exceed one million units.