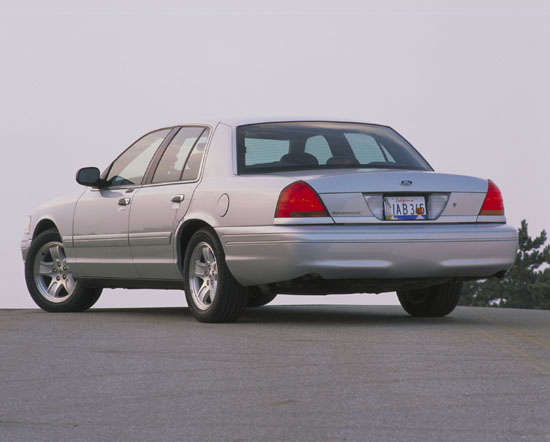 FEDS ABSOLVE CROWN VIC
The National Highway Traffic Safety Administration (NHTSA) says the Ford Crown Victoria meets all relevant safety standards and poses no more threat of a fire in a crash than the Chevrolet Caprice. The Crown Vic, at the center of a literal and metaphoric firestorm brought by police and citizen groups across the country, withstands a 30-mph rear collision without intrusion into the fuel tank and fuel spillage, the agency says. Consumer groups and law enforcement agencies, in Arizona in particular, have charged that the Crown Vic is unsafe because some vehicles have caught fire following high-speed collisions. Fourteen officers have died in Crown Vic crashes in the past decade, Reuters reports; about 350,000 Vics are in service as police vehicles.
Ford Makes Changes in Crown Vics by Jim Burt (9/30/2002)

DC FOLLOWS ZERO PERCENT SUIT
DaimlerChrysler’s Chrysler Group is rejoining GM and Ford in the zero-percent wars for 2003 models. The company’s popular minivans can be had with zero percent for up to five years of loan term; 60-month loans on other Chrysler Group cars get lower interest rates as well, while 23 other vehicles will get zero percent financing for terms of less than 60 months. Some rebates have been boosted, and the company still has a seven-year/70,000-mile warranty unmatched by its rivals. Both GM and Ford have announced zero-percent financing on 2003 models as well.
Sept. Sales: Signs of Slowdown by Joseph Szczesny (10/1/2002)

NHTSA PROPOSES ROLLOVER TEST
The National Highway Traffic Safety Administration (NHTSA) has issued its proposal for a new set of rollover tests that would rate new cars and trucks. The agency is suggesting that as many as 100 new cars and trucks each year be put through a two-turn maneuver at different speeds to judge their propensity to roll. The NHTSA is charged with developing the test by laws passed during the height of the Ford/Firestone fiasco in 2000 that led to the recall of 6.5 million tires. The agency estimated nearly 10,000 people are killed per year in light-truck rollover accidents, Reuters reports. 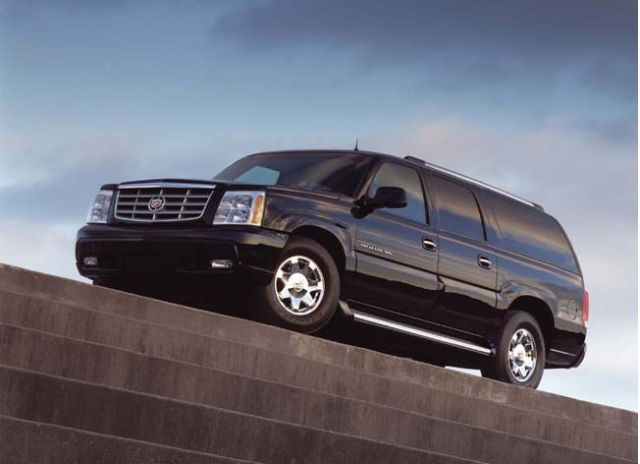 ESV PRICED FROM $56,160
Cadillac says its long-body Escalade — the 2003 ESV — will begin at $56,160. The ESV, due in dealer showrooms by December, will sport an extensive list of standard equipment, including a 345-hp V-8, all-wheel drive, Stabilitrak, 17-inch chrome wheels and leather trim. XM satellite radio is an option. The ESV is 22 inches longer overall than the standard Escalade, and has more than 20 inches of additional length inside. 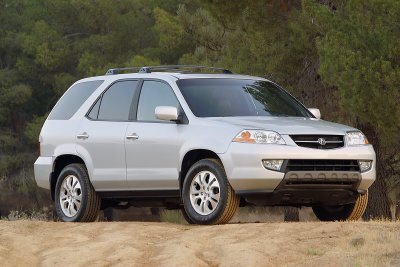 ACURA SETS PRICE FOR ’03 MDX
Acura says the more powerful 2003 MDX will be priced at $35,700, a small boost over the 2002 price. The MDX’s 3.5 liter V-6 engine now makes 260 hp, a 20-hp boost. It’s delivered through a new five-speed automatic transmission, a drive-by-wire throttle control and a recalibrated four-wheel drive system. Vehicle Stability Assist (VSA) is now standard. The MDX can be had with three options: a luxury Touring Package priced at $2,600; available on models equipped with the Touring Package, a newly enhanced Acura Navigation System with Voice Recognition and rearview camera priced at $2200; and the Acura DVD Entertainment System priced at $1500.

MASERATI LAYS OUT FOUR-DOOR PLANS
Maserati will unveil its new four-door, tentatively named the Quattroporte after the 1970s sedan of the same name, at next autumn’s Frankfurt Motor Show, Ferrari/Maserati Chairman Luca de Montezemolo tells TheCarConnection. “The car will be more or less of the dimensions of the Mercedes S-Class or BMW 7-Series,” and will feature “a mix of Maserati historic (design) elements, with (touches) of Italian classic design, but also very innovative.” With the debut of the sedan, says de Montezemolo, “the Maserati re-launch is finished,” and the company can now focus on growth. The reborn brand should reach 3500 sales worldwide by the end of this year, putting it just short of Ferrari’s 4200. The U.S., the Italian executive said, is now Maserati’s top global market. As a result of the Maserati brand’s revival, Ferrari/Maserati, as a group, will post approximately 15-percent improvement in most of its key metrics, including sales and profits this year, the company anticipates. —TCC Team

ECHO RECALL AT TOYOTA
Toyota will recall nearly 400,000 compact cars worldwide for a braking issue that could also affect drivers of the North American version, the Toyota Echo. Almost 50,000 Echos are involved in the recall, which stems from a poorly designed brake-fluid pipe, Reuters reports, that could be opened if ice collects in a rear wheel well. The company hasn’t received any reports of accidents or injuries from the complaint.

DAEWOO RECALLING U.S. NUBIRAS
Bankrupt South Korean carmaker Daewoo says it will recall about 40,000 Nubira sedans because of defective brake hoses. Reuters reports Daewoo will recall 2000 model-year Nubiras because the car’s brake hoses are susceptible to cracks and leaks that will be fixed at dealerships. The fixes should happen soon: earlier this year General Motors agreed to take on select Daewoo assets in a fire sale that didn’t include the company’s U.S. dealer network. Dealers tell the news service that despite the bankruptcy of the parent company, the repairs will be covered.
Suppliers Put Daewoo Deal in Danger by Joseph Szczesny (9/3/2002)

Smart Airbags Coming, but Are They Ready?

The National Highway Traffic Safety Administration (NHTSA) has turned a deaf ear so far to protests against a regulation mandating that 20 percent of 2004 models replace one-size-fits-all airbags with so-called “smart” airbags that electronically adjust deployment for the size of passengers.

Despite warnings from automakers and suppliers that the new airbags are not as reliable as conventional ones, the NHTSA has yet to consider a rethinking of the “smart” system. “These new airbags are nowhere near the 99 percent failsafe record of the present airbags installed in the steering wheels and front instrument panels since the 1980s,” says Toyota regulatory affairs director Chris Tinto.

The “smart” bags are designed to prevent fatalities inflicted by the conventional bags on at least 215 persons since 1990, of which 133 were children. They would not deploy in front-end crashes if kids were in the front seats. But automakers fear that even the “smart” bags can be fooled into failing to deploy if small adults are seated, or mistakenly deploy because of the weight of occupied child seats or extra tension in safety belts, says DaimlerChrysler.

The NHTSA has proposed requiring automakers to install “smart” bags in 20 percent of their 2004 models, instead of 35 percent, but with ’04 models being finalized for safety and emissions testing, time is running out for a delay in the rule to allow further testing of what supplier Siemens says is far from a “foolproof” system. —Mac Gordon 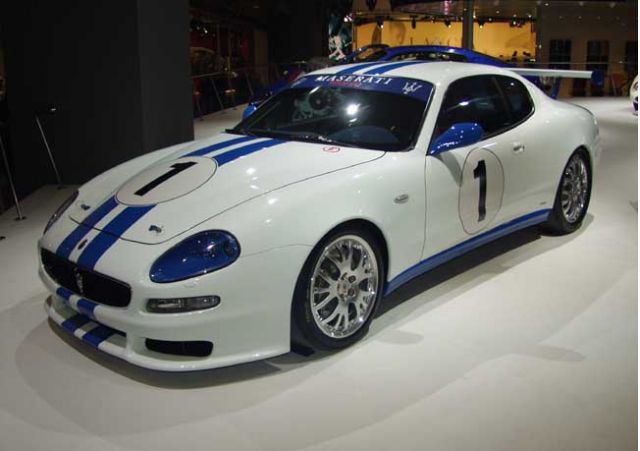 Customers, start your engines. It's time to go to Maserati school. That's according to company execs who all but confirmed an agreement is being carved into stone with a well-known West Coast performance driving school for Ferrari owners and Maserati intenders.

Until now, those who wanted some extra instruction had to travel to Italy for their coursework. (A nice excuse for a trip, but not always practical despite the fact some dealers such as Cauley Maserati in suburban Detroit include round-trip fare and other amenities as part of their sales package.)

Luca Dal Monte, PR director for Ferrari Maserati NA, and his counterpart from Italy confirmed that execs had "positive" meetings over the weekend, off-site in  Indianapolis, with some details still to be negotiated. The school, probably in San Diego, will teach three levels of driving skills, from basics such as the optional clutchless Cambiocorsa manual trans that can deliver a punch start but whose paddle shifters initially feel awkward even for an experienced stick shift driver. Ferrari owners also can learn to drive on a race track. But despite a long Maserati racing heritage, those more populist vehicles probably will be limited to a performance segment since they're expected to be used essentially as year-round cars, according to Dal Monte.

Maserati is just reemerging as a nameplate in North America after a years-long absence and eventual acquisition by Ferrari. Officials are aiming at a 4000 combined vehicle market within four years, shared by the coupe ($84,025 to $87,225 base), soft-top Spyder ($90,015 to $93,215), upcoming sedan and far pricier Ferraris that can cost $325,000 or more. Letting potential buyers learn to optimally drive the 4.2-liter V-8 Maseratis on a controlled course will play into that marketing plan. "When we were selling 1000 cars it didn't make sense," said Dal Monte. "But with 4000, it does."

Maserati has reason for optimism. The buy rate among customers who pre-tested them at the Italian course is "100 percent," said Silvio Vigato, in from Modena, Italy headquarters. "It could be the same in North America." —Martha Hindes

Tiger Gets Into His Rendezvous’ Tank

Though Tiger Woods and the rest of the U.S. golf team are still getting over their recent loss at the Ryder Cup, one thing might get Tiger out of his funk — hitting up his friends at General Motors for keys to the Buick Rendezvous Tour Edition concept.

This one-off, streetable concept is the brainchild of Holly Bedsole, GM’s manager of special vehicles for Buick and Hummer. The 4.3-liter V-6 gets a healthy dose of ponies from a supercharger with an intercooler, resulting in 240 horsepower, an increase of 55 over stock.

A three-inch drop along with 18-inch HRE wheels mounted with low-profile, sticky performance tires helps significantly offset the Rendezvous’ tall and stubby shape, while out back a custom-fabricated cross-car exhaust outlet and extended high-mount spoiler set the vehicle apart from other soccer mom transporters.

Bedsole also worked the interior with black pearl leather seat inserts and a fortified Bose audio system tweaked specifically for the Rendezvous. Mounted behind the rear seats is a two-level pullout golf bag carrier and organizer designed specifically for Tiger and his Caddy.

The  Rendezvous Tour Edition will be making appearances at car shows around the country for the rest of 2002, though a production version is probably not within driving range. —Fred Staab