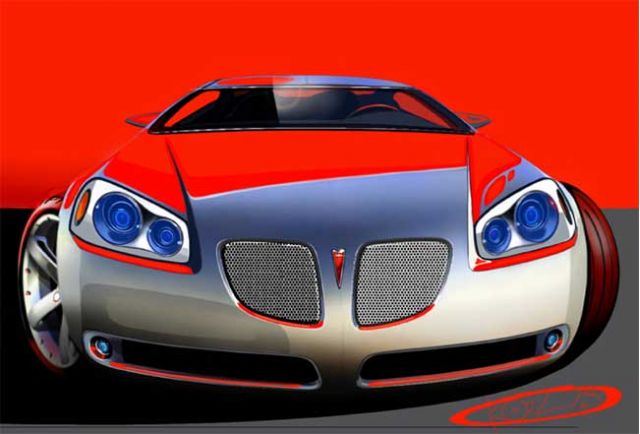 GM SKETCHES OUT 2003 CONCEPTS
General Motors is spending the weekend before Pebble Beach’s concours full-courting the press with background information on everything from the Cadillac SRX to its new range of concept cars. Inside TCC today, you can find sketches (and notes from GM) that preview what GM plans to roll out at international auto shows in the course of 2003. Find out more inside TCC right now:
GM Sketches Out ’03 Concepts (8/15/2002) 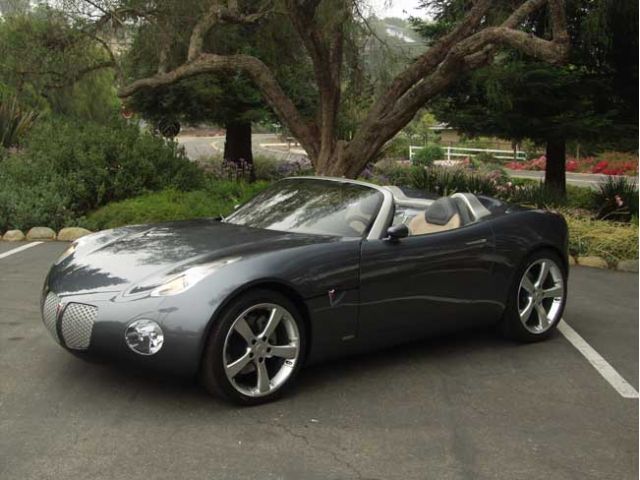 PONTIAC SOLSTICE ON TRACK FOR PRODUCTION?
While there are still a number of obstacles to overcome, there’s a strong and growing likelihood General Motors will put the well-received Pontiac Solstice into production. If all goes well, “you could see it 24 months from now,” said Advanced Vehicle Development Director Mark Hogan, though he stressed, “That’s got a ton of reach in it.” One of the critical goals is to keep a production version as close as possible in look and feel to the sporty two-seater that debuted at the Detroit auto show last January. That would include the futuristic double-bubble fairings and the 240-horsepower, turbocharged L-850 engine of the concept convertible. “The goal is to bring it in at under $20,000” for the base model, which would likely be a 160-hp version, added Hogan. Read TCC Team’s test drive of the Solstice concept inside TCC today:
We Drive Pontiac’s Solstice (8/15/2002)

CADILLAC: “V” FOR “VICTORY” AND “VELOCITY”
Cadillac has given its new, high-performance brand-within-a-brand a name: the “V-Series.” That’s “V, as in velocity,” General Motors Vice Chairman Bob Lutz told TheCarConnection. But it could also stand for “victory,” if it helps restore the tarnished luster of the automaker’s flagship brand. As TCC reported earlier this year, Caddy will launch a number of high-performance models, starting early next year with the CTSi, a 400-hp version of the new and edgy CTS sedan. It will be powered by a version of the Corvette’s LS1 V-8. Many, if not most future Cadillacs will be offered in V-Series trim, a move echoing the strategy of Mercedes-Benz’s AMG-tuned lineup. Lutz promised Caddy’s performance line “won’t do anything that isn’t up to the level of the Europeans.” Meanwhile, in a weekend speech at a gathering of Cadillac aficionados celebrating the brand’s 100th anniversary, the GM “car czar” revealed that the Detroit automaker is investing about $4.5 billion to revive Cadillac. “If a company like ours can’t even get its flagship straight,” Lutz asked, “how is it going to get its other divisions fixed?” —TCC Team
Why GM Needs Fiat Now by John Rettie (7/29/2002)

HEMI BACK AT CHRYSLER 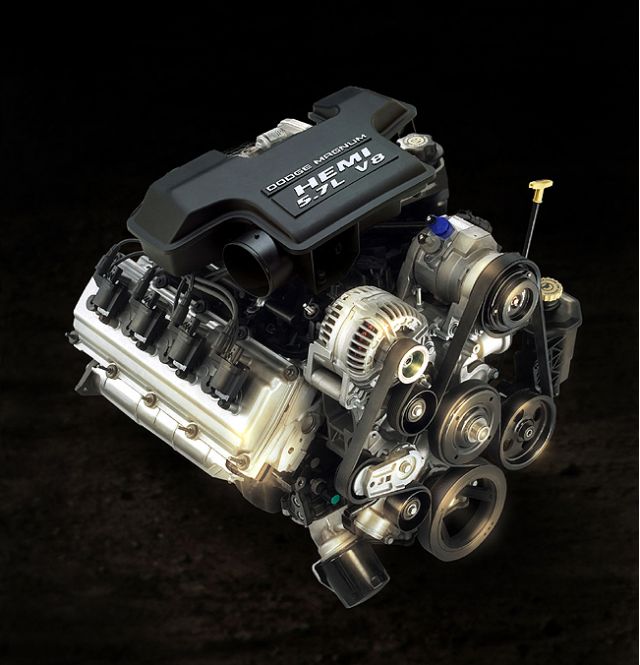 As Detroit’s Woodward Avenue echoes with the roar of ‘60s muscle cars during the Dream Cruise this weekend, the Chrysler Group will rev up one of the grand old engine names with its new 5.7-liter Hemi V-8, which goes on sale in September or October in the Dodge Ram 2500/3500 heavy-duty pickups.

Chrysler built a wide variety of Hemi engines beginning in 1951. That 331-cid engine was Chrysler’s first V-8, and the first of many engines to use the company’s distinctive hemispherical combustion chamber design. The most celebrated of those Hemis was the 1964 426-cid engine that swept the top three places in the Daytona 500. Street versions of that engine produced 425 hp and 390 lb-ft of torque. 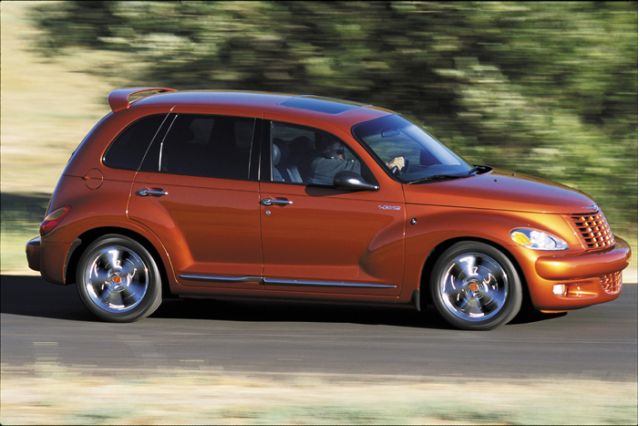 CHRYSLER JUICES TANGERINE DREAM PT
Chrysler aims to squeeze a little more juice from Detroit’s celebration of muscle cars and custom vehicles with a tangerine-colored turbocharged PT Dream Cruiser Series 2 it unveiled for the beginning of the Woodward Dream Cruise. Priced at $26,475 with a five-speed manual transmission and $26,915 with a four-speed automatic, the special-edition PT Cruiser will go on sale early in 2003. The Dream Cruiser Series 2 gets a host of exterior tweaks, including its unique tangerine pearl coat paint, chrome body-side moldings, 17-inch chrome wheels with tangerine center caps and a tangerine rear spoiler and a plaque with each car’s production number in the center stack. The interior repeats the tangerine color scheme: door bolsters, seats and instrument panel. The rest of the interior is a dark-gray slate color. The Dream Cruiser Series 2’s standard equipment includes the 215-hp/245 lb-ft turbocharged 2.4-liter four-cylinder engine, ABS, traction control, a power sunroof and a factory-installed Sirius satellite radio with a one-year subscription. Chrysler plans to build 9500 units of the Dream Cruiser Series 2. About 7000 will be sold in North America, with the remainder exported. Chrysler will add a convertible version of the PT Cruiser early in the 2004 model year. –Mark Phelan
Chrysler Turnaround Moving On by Joseph Szczesny (7/29/2002)

PT CRUISER IN RECALL MODE
Chrysler is recalling every 2001 and 2002 PT Cruiser to install a fuel pump seal. Some 464,315 Cruisers will get the fuel seal after a federal crash test uncovered a potential fuel leak. No incidents have been linked to the problem. Additionally, Reuters reports, about a fourth of the Cruisers will also receive a new clip to adjust the positioning of a fuel supply line.

FOCUS FIRES UNDER FIRE
The National Highway Traffic Safety Administration (NHTSA) is intensifying an investigation of the Ford Focus. NHTSA says it’s looking into all of the more than 690,000 Focus compacts sold in the U.S. over the past two years, to find out more about possible engine fires starting near the battery. The Focus has been involved in nine recalls and is being investigated for five other complaints, Reuters reports.

PRIUS FIRST IN LINE FOR TAX BREAK
Toyota’s Prius will be the first vehicle eligible for the $2000 clean-car tax break promised by the Feds. Reuters says the Internal Revenue Service has given the go-ahead for owners of the 2001-2003 Prius to apply for the one-time tax credit given to hybrid and other gas-saving vehicles. The Prius’ hybrid drivetrain uses a gas engine augmented by a battery pack. Toyota says it has sold more than 32,000 Priuses in the U.S.
Cargirl: Breeding Hybrids by Lesley Hazleton (1/21/2002)

CADILLAC XLR IN NEIMAN XMAS CATALOG
General Motors Corp. is teaming up with Neiman Marcus to promote the new Cadillac XLR as the gift to give and get this coming Christmas. Cadillac and Neiman Marcus are expected to announce this week that XLR will be featured in the upcoming edition of the Neiman Marcus Christmas catalog. GM officials confirmed a version of the XLR also will appear on Woodward Avenue during the Dream Cruise. The XLR, a two-door, two-seat, rear-wheel-drive roadster, is expected to go on sale next May. It will be built alongside the Chevrolet Corvette at the GM assembly plant in Bowling Green, Ky., and is expected to retail for around $75,000. Cars featured in the Christmas catalog will be delivered next spring. —Joe Szczesny
Spy Shots: ‘04 Cadillac XLR by Brenda Priddy (5/20/2002)

BRIDGESTONE FACING CALIF. TIRE LAWSUIT
A new lawsuit filed in California says that Bridgestone/Firestone should recall some 27.5 million tires somewhat related to the star-crossed Wilderness tires. Attorney Joseph Lisoni filed the suit in California Superior Court in Riverside County, charging that some 27.5 million Bridgestone Steeltex tires also suffer from tread separation, the flaw that led to a massive recall of Firestone tires in 2000. Bridgestone/Firestone says the tires have been found safe by the National Highway Traffic Safety Administration, and only one death has occurred in the tire series from tread separation.

FORD SETTLES LEASE CLASS-ACTION
Some recent Ford lease customers will be getting part of an $87 million class-action lawsuit. The action, filed on behalf of two Mazda lessees in Maryland last year, says that the company charged more than the 6-percent late payment fee allowed by law. The action involves some 1.8 million customers of Ford Credit. The company says at most, it will have to pay about $80 million to those affected by the lawsuit.