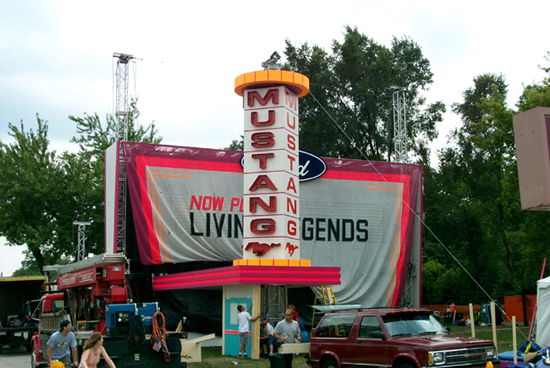 BIRMINGHAM, Mich. - The annual Woodward Dream Cruise has become the automotive equivalent of a Who or Rolling Stones concert - a chance for aging Baby Boomers to talk about the cars of their long-gone youth.

But Baby Boomers still initiate about half the new car purchases made in the U.S. every year and the carmakers, particularly the Big Three, aren't about to pass up a chance to cater to the huge audience. Thus Woodward Avenue, the home to the Cruise, is lined with special displays from General Motors, Ford and the Chrysler Group, which even plays down its German connections during what has become the Motor City's equivalent of Mardi Gras.

It’s almost like 1960 all over again: the Japanese and European competition can be forgotten for the day even though the number of old British and German sports cars in the parade seems to grow every year.

Suppliers like Eaton and Visteon also have joined in to hawk their wares during the Dream Cruise. Indeed, the Eaton display featured one concept vehicle, a PT Cruiser pickup, that looked as if it could roll right on out on to Woodward and join the gaudy parade of customized cars, classic vehicles from every corner of the industrialized world and overheating Detroit muscle cars from the 1960s.

The Dream Cruise has become a huge marketing opportunity for the PT Cruiser. More than 1,000 PT owners showed up for a special party at the Walter P. Chrysler museum, which is about a 10-minute drive from the Dream Cruise's northern terminus on what was once Wide Track Drive in Pontiac.

Tom Marinelli, senior vice president of Chrysler marketing, said limited editions help keep the PT fresh and interesting. Production of the Chrysler PT Dream Cruiser Series 2 won't begin until January 2003 and will be limited to 7500 units for North American markets and 2000 units for international markets, where the vehicle will be called "Chrysler PT Street Cruiser Series 2," DaimlerChrysler spokeswoman Beth Ann Bayus said. Some of the Series 1 PT Cruisers, which were rolled out at last year's Dream Cruise, are still available from dealers, but more than 300 have been sold to customers outside of North America and far away from Woodward Avenue.

Ford, meanwhile, has become one of the main sponsors of the Dream Cruise; while the company has been cutting back in other areas, its commitment to the Dream Cruise has expanded this year. With new displays, such as the "Mustang Drive-In" in Berkley, Mich., and the "Cruisin’ with Lincoln" display at the tony Cranbrook Academy of Art in Bloomfield Hills. "When we learned that the Woodward Dream Cruise was extending its reach into Bloomfield Hills, we knew that it was a natural for Lincoln to play a leadership role," said Randy Stewart, Lincoln Mercury Detroit Regional Manager. "We're playing to Lincoln's strengths here: style, luxury and performance," Stewart added.

In addition, the Revvin’ with Ford party in Downtown Birmingham on the Friday before the official cruise Saturday has continued to grow and has become a big outing for Ford buffs to show off a whole array of classics that the company has produced in the past century.

Ford, however, wasn't interested in showing off just classics from the past. The Mustang Drive-In showcased not only cars from the past but also from the present and future against a backdrop of local bands. Figuring prominently in the display will be Ford's Living Legends Tour, which features the GT40 concept, the Ford Forty-Nine concept, a 2002 Thunderbird and two 2003 special-edition Mustangs, the Mach 1 and Pony.

General Motors, however, wasn't about to give any ground along Woodward to its rivals from Auburn Hills and Dearborn. GM also had special displays including an eye-catching display of performance vehicles set up by GM Racing and Service Parts organization where Old Woodward joins Woodward at the edge of Birmingham. Highlighting the display were a series of Cavaliers with spoilers and ground effects like nothing found in airport rental fleets.

Another display further south on Woodward played host to the first Chevy SSR built off of production tooling and a prototype of the new Cadillac XLR as well as Pontiac Solstice that GM officials insist they are still trying to figure out how to build.