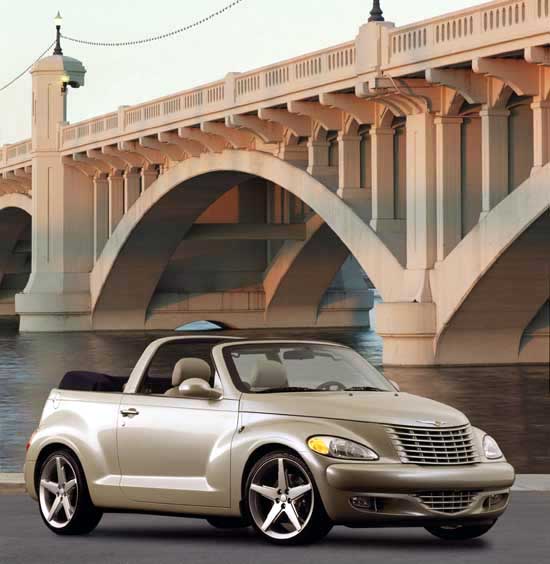 Hoping to maintain enthusiasm for its hot-selling PT Cruiser, Chrysler intends to announce this week it will be rolling out an open-air spin-off of the popular retro-themed wagon. The formal announcement will be made at the Geneva Motor Show, and while details are slim, the Cruiser convertible should hit showrooms in early 2004. It will be based on a concept vehicle first unveiled at the New York Auto Show last year. The Cruiser convertible will be a two-door, four-seater and Chrysler promises the rear seat will offer more than enough room for two adults. Read more about the PT ragtop – and a possible 240-hp PT Turbo coming soon in today’s edition of TheCarConnection.com:
PT Cruiser Topless At Last (3/3/2002)

ZERO PERCENT IS BACK
GM and Ford are kicking off a new round of incentives by adding lease spiffs and, in GM’s case, bringing back zero-percent financing. Returning lease customers are eligible for $1500 in special incentives, GM officials said, and GM will continue offering $2002 customer cash or zero-percent/low-interest loans for qualified buyers on the purchase of most new 2002 Chevrolet, Pontiac, GMC, Buick, and Oldsmobile cars and trucks through March. Smaller rebates of $1500 or no-interest loans are being offered on mid-size and full-size sport-utility vehicles and pickup trucks. Ford also announced a new lease incentive, offering lease loyalty bonuses up to $1500 on most 2002 Ford brand vehicles for returning lease customers. It also plans to announce more new incentives this week.

TCC WINGS IT TO GENEVA
The Geneva show is opens to the public, and in our Geneva show coverage, we have the models every Euro showgoer is elbowing to see. See pictures of the Porsche Cayenne and Ferrari 575M, find out why VW might change the name of its coming sport-ute, and find out more in the latest adventures of Tata.

FORD BACK WITH FIRESTONE?
In other Geneva news, Bill Ford said his company is working to rebuild its long-time relationship with tire supplier Bridgestone/Firestone, though that may take a good long time to resolve the differences that rose up as the result of two recalls involving millions of Firestone Wilderness AT tires. The latest callback cost the automaker $3 billion and Ford said the automaker will “explore creative ways” by which Firestone may help cover some of those costs.

VW RETHINKING “TOUAREG”
Naming a new car after a tribe of Saharan slave traders may not be the best idea after all.  Or so say Volkswagen’s U.S. dealers, who are asking the German carmaker to come up with an alternative name for the new Touareg sport-utility vehicle.  The unusual name was announced earlier this year to a less-than-rousing response, especially in the States, where there are few who know who the Touareg are, let alone how to pronounce the word.  And many of those who are aware of the Touareg fear the tribe’s historic nature could prove embarrassing in ethno-conscious America.  Dealers have hit a responsive chord with VW of America officials, who tell TheCarConnection they’ve asked corporate headquarters to come up with an alternative nameplate, at least in the U.S.  That wouldn’t be without precedent: the Golf was once sold in the U.S. as the Rabbit.  A decision should be made well before the SUV goes on sale next year.

EXTENDED GM UTES GET V-8
The 2003 extended-wheelbase Chevrolet TrailBlazer EXT and GMC Envoy XL will offer GM’s Vortec 5300 V-8 as an option, the company said today. The engine, which will use an aluminum block in the mid-size sport-utes, will be rated at 280 horsepower and more than 320 lb-ft of torque. The base engine in the utes will be the 270-hp, 4.2-liter in-line six found in the standard models.

JAG PRICES NEW S-TYPE
The MSRP for the revamped Jaguar S-Type sedan start at $42,495 for the standard V-6 model, Jaguar announced today. The 400-hp, supercharged S-Type R tops the range at $62,400. Six-speed automatics, new suspensions and a new interior grace the ’03 models, which go on sale on May 6. 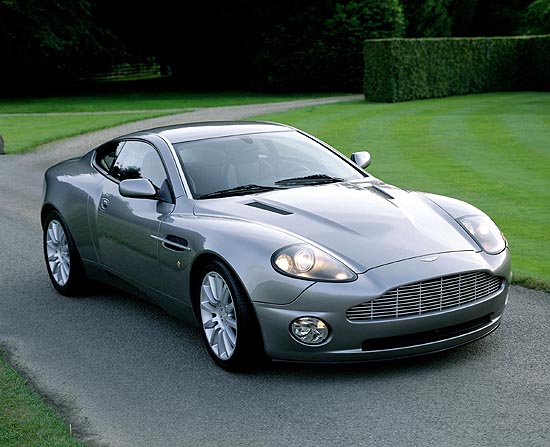 When the next James Bond film hits the silver screen later this year, super-spy 007 will, as already reported, be driving the Aston Martin Vanquish. But TheCarConnection has learned “this will be the PAG film,” according to a Ford source, referring to the automaker’s Premier Automotive Group. While a few final details haven’t been confirmed, it appears the film’s villain will be driving a Jaguar XK8 specially customized by Jag’s chief designer, Ian Callum. One of the legendary “Bond girls” will be driving a new Thunderbird (not actually a PAG vehicle, but close enough), and plans reportedly called for other Premier brands, including Volvo and Land Rover, to make their Bond debuts.
Preview: Aston Martin V12 Vanquish by TCC Team (10/16/2000)

AUTOWEEK’S LEON MANDEL DIES
AutoWeek’s publisher emeritus, Leon Mandel, died Tuesday at age 73. The former editor and publisher of the weekly enthusiast magazine, and former author and contributor to Car and Driver, Motor Trend, and other publications, had been diagnosed with leukemia. He is survived by his son Dutch, editor and associate publisher of AutoWeek; his daughter Olivia; their spouses; and five grandchildren.

SEINFELD BUILDING OWN NYC GARAGE
When you own a score of classic Porsches and live in Manhattan, your storage options are few — unless, of course, you’re multimillionaire-about-nothing comic Jerry Seinfeld. Car nut Seinfeld, according to the New York Observer, is building his own 20-space parking garage on 83rd St., in the Upper West Side three blocks from his home. The garage is due to be completed in June at a cost of $1.4 million.