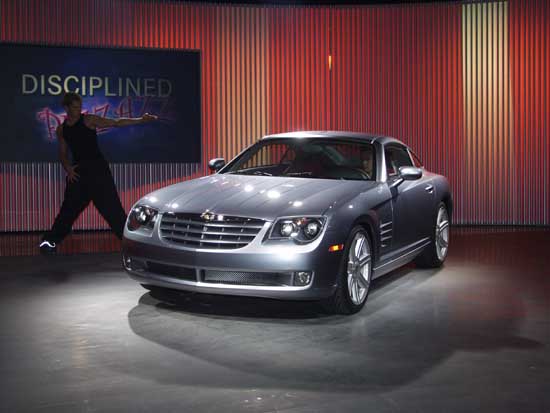 CRUISER CABRIO AND CROSSFIRE GOING GLOBAL
Chrysler is betting it can increase global sales sharply when it rolls out its new Crossfire sports car and the ragtop version of its PT Cruiser. That’s one reason the automaker is going with the European-style name, Cruiser Cabrio, rather than the more American “convertible,” explains marketing chief Jim Schroer. Look for the Cabrio to sell somewhere upwards of 30,000 units a year, insiders hint, with a strong market projected in Europe. Meanwhile, Chrysler revealed that it plans to produce 20,000 Crossfires a year—though it could increase volume a bit if demand is strong. About 15% of those are earmarked for outside North America. The Cruiser Cabrio “will really help us with younger buyers” all over the world, noted Schroer. For the moment, Chrysler will only confirm plans to use the normally aspirated, 2.2-liter engine in the Cabrio. But a GT version “would be a good idea to look at,” Schroer added. Indeed, a version of the Cabrio using the upcoming, turbocharged GT engine may show up on the Chrysler stand at the New York Auto Show later this month. 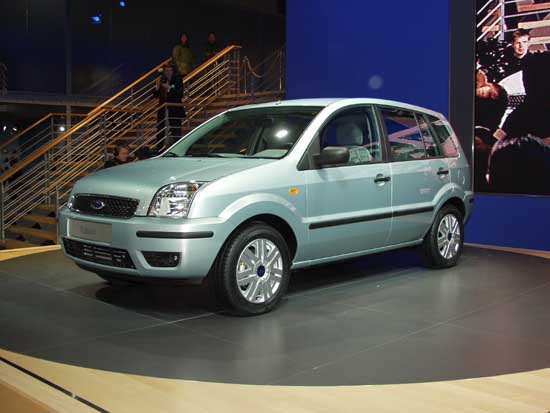 FORD FUSION SLATED FOR U.S. SHOWROOMS
Ford Motor Co. unveiled the latest in a steady stream of new products on Tuesday. The Fusion is a so-called “urban activity vehicle,” designed to deliver many of the advantages of a sport-ute in a package more suited to the tight city streets of Europe. “People want small vehicles that don’t make them feel vulnerable,” declared European product development chief Martin Leach. Thought the tall wagon measures just over 13 feet nose-to-tail, it appears larger, primarily because of its height and it adds the higher seating position of an SUV. Ford is betting Fusion’s huge cargo compartment, five-seat design and Intelligent Protection System will be a lure for younger buyers. Production in Europe begins later this year, and shortly afterwards, Fusion will roll down the new and highly efficient assembly line Ford is building in Bahia, Brazil. Expected to be the most efficient factory in the Ford empire, Bahia will produce a version of the Fusion for the U.S. with an introduction date set for early 2004.

IS MONDEO NEXT?
Ford is “looking at our entire European lineup to see what is applicable to North America,” said CEO Bill Ford. It’s been a number of years since Ford’s European assembly plants shipped vehicles to the States. But lopsided exchange rates are certainly reason to reconsider that option. Among the more likely products to cross the Atlantic is the Mondeo, the latest generation of what Ford once called its “world car.” The idea was scrapped awhile back, but said Ford, “we’re looking again at it.” 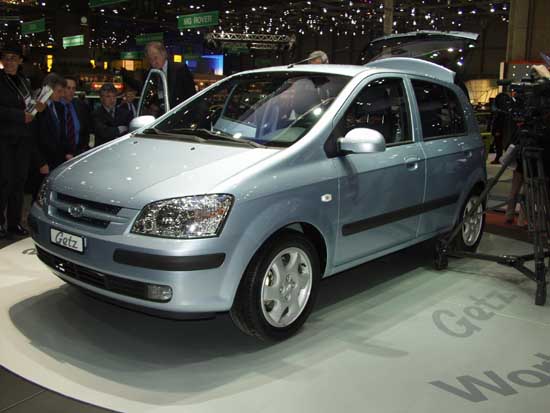 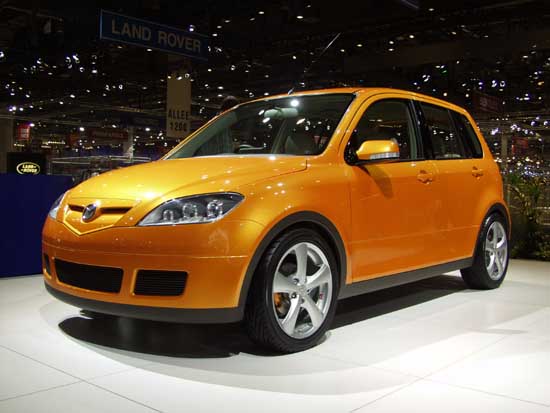 TALL AND SMALL ALL OVER GENEVA
The Fusion is just one in a flood of so-called “tall” B-class vehicles hitting the road in Europe. Measuring around 13-14 feet long, these vehicles are well suited to European roads, but they provide a distinct advantage over more conventional B-cars, such as the Ford Fiesta and Citroen C3. Their higher rooflines allow for more innovative packaging and that translates into seating for at least five adult passengers, along with plenty of cargo space. Hyundai, with its new Getz, was one of several other manufacturers serving up a B-wagon at the Geneva show, while Mazda had a concept vehicle on display, the MX Sport Runabout, and even more models are on the way. Until recently, such vehicles have found little demand on the other side of the Atlantic, but there may be a new market developing in the U.S. for such vehicles, industry officials suggested. The apparent demand for the new Mini in the States is forcing manufacturers to take a closer look at their options. Nissan is reportedly ready to import a version of its March minicar, and Ford, as noted, will be bringing a version of the Fusion. “I think it’s just a matter of time,” said Ford’s Phil Martens, before rising fuel prices, government regulation or other factors shift American market trends, and then companies like Ford “will need small cars.”

EUROPE A TEMPLATE FOR FORD
Ford’s recovery in Europe will provide “a template” for a turnaround in North America, declared the automaker’s chairman and CEO, Bill Ford, during an interview at the Geneva Motor Show. Ford tried to quell mounting concerns about the pace of Ford’s North American revival, cautioning that the steps outlined in January will “take time to bite.” He also said that Ford has crafted a second-step, worst-case-scenario program of further cost-cutting, though he declined to reveal any details or what it would take to put “Plan B” into effect. One threat to the current plan is fast-rising incentives. General Motors recently revived its zero-percent financing campaign and while Ford has yet to match it, Bill Ford said “we can play in (this game) as long as we have to. We’ll be competitive.”

FORD BACK WITH FIRESTONE?
In other news, Ford said his company is working to rebuild its long-time relationship with tire supplier Bridgestone/Firestone, though that may take a good time to resolve the differences that rose up as the result of two recalls involving millions of Firestone Wilderness AT tires. The latest callback cost the automaker $3 billion and Ford said the automaker will “explore creative ways” by which Firestone may help cover some of those costs. 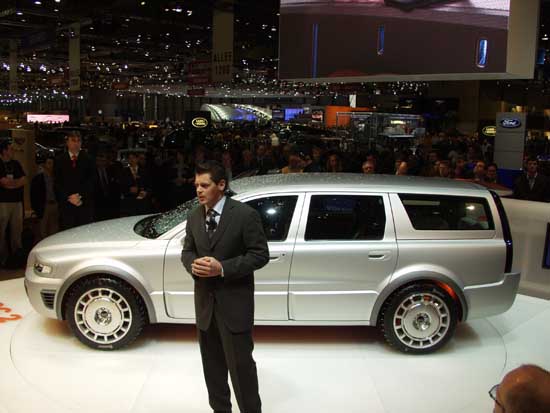 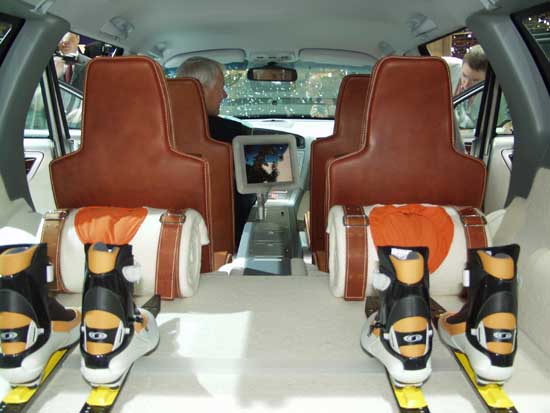 VOLVO GOES ON AN ADVENTURE
What better place to introduce a vehicle influenced by the Swiss Army knife than in Geneva? Volvo designer Peter Horbury compared the Adventure Concept Car II to the legendary tool, pointing to the prototype’s vast assortment of features. The center console, a sort of high-tech “utility belt,” contains a variety of pop-up high-tech devices, such as an MP3 player, a digital camera and a PDA. But in keeping with Volvo tradition, the show car also boasts an assortment of safety features, including four-point, criss-cross seatbelts. The look of the cockpit, added interior designer Jonathon Dale, was “inspired by Scandinavian furniture and the dynamic performance of a sports car.” 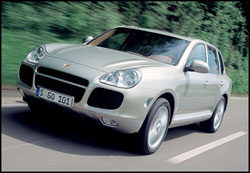 PORSCHE CAYENNE AND MAYBACH MAKE BRIEF APPEARANCES
You had to look quick to get a glimpse of two of the most eagerly awaited cars making their “debuts” at the Geneva Motor Show. DaimlerChrysler hid a prototype of its new Maybach ultra-luxury sedan behind a thick wall of glass and used only enough lighting to provide a sense of its basic shape. Porsche, meanwhile, projected a series of slides of its new Cayenne sport-utility vehicle. The automaker did offer up some previously secret details: there will be two versions of the Cayenne, which is the result of a joint venture between Porsche and Volkswagen. The Cayenne S will feature a 340-hp, 4.5-liter V-8, and will hit 0-100 km/h (62.5 mph) in 7.2 seconds. The Cayenne Turbo will pump out 450 horsepower and cut the take-off time to 5.6 seconds. Both vehicles will come with standard, full-time all-wheel-drive and the Porsche Stability Management system. “Like professionals playing poker,” Porsche wants to dole out just enough details to build interest before a full and formal roll-out at the Paris Motor Show next September, acknowledge CEO Wendelin Wiedeking. DCX intends to pull the Maybach out from behind the smoked glass in Paris, as well. 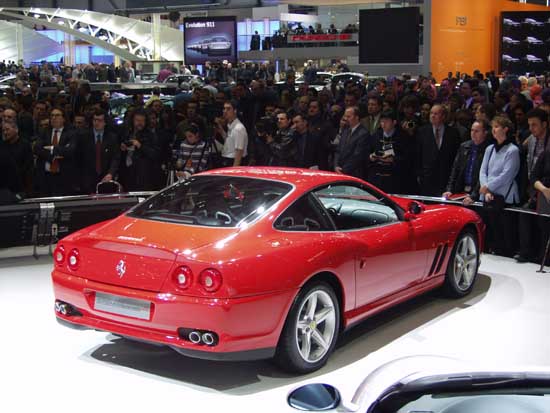 FERRARI TAKES TWO
The Italian automaker had a pair of new products for the Swiss show—if you include one carrying its reborn Maserati nameplate. The Ferrari 575M Maranello is an updated version of the 550, a 515-horsepower performance machine fitted with a new, higher-performance V-12 engine that is mated, for the first time, to an F1-style gearbox. There’s also an all-new electronic suspension system and an all-new interior. “We have a long waiting list for this car,” suggested Ferrari CEO Luca de Montezemolo. 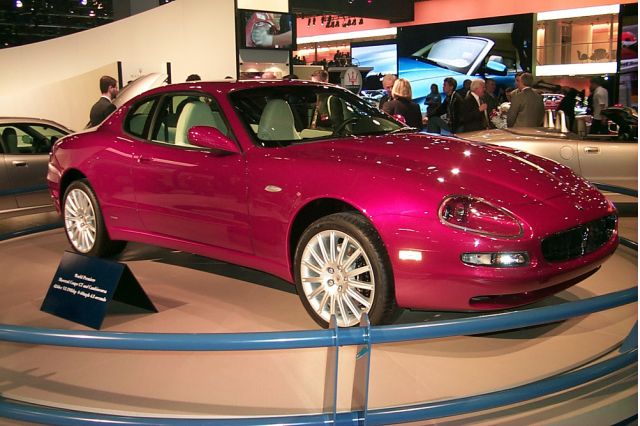 The Maserati Coupe brings a second model to the once-successful carmaker’s lineup (the earlier Spyder Cabrio is shown above). It’s meant to compete with the likes of the Porsche 911. Maserati’s revival will take some time to build momentum, admitted Ferrari/Maserati’s U.S. CEO, Stuart Robinson. Describing the effort as a “slow-burn strategy,” Robinson said he expects initial sales of only about 1200 units during the first year or two in the States. It will take that time to convince skeptics that the “new” Maserati is here to stay with products that are significantly better and more reliable than the ones that nearly destroyed the brand in the 1980s. If that plan works, Robinson hopes sales will surge to 4000 annually by mid-decade. (Detroit show vehicle pictured .)