KERRY WANTS MAJOR CAFE INCREASES
Massachusetts Senator John Kerry doesn’t think the Bush administration is doing enough to boost fuel economy — in fact, the Senator would like to see the government raise the Corporate Average Fuel Economy (CAFE) standards “as far and as fast as we can,” he said in a speech on Tuesday. Kerry, a member of the Senate Commerce, Science and Transportation Committee, is working on a bill to propose an undisclosed increase in the CAFE requirements, which are currently 27.5 mpg for passenger cars and 20.7 mpg for light trucks. Kerry has supported the Bush administration’s push for fuel-cell technology research; he is also said to be among a handful of Democrats eying a presidential campaign in 2004.
Cargirl: Breeding Hybrids by Lesley Hazleton (1/21/2002)

HYUNDAI PREPS PLANT ANNOUNCEMENT
Will it be Ohio, Alabama or some other state? Hyundai isn’t saying where its new U.S. assembly plant will be built, but a company spokesman indicates that a decision is coming soon. Reports yesterday had Hyundai Motor president Kim Dong-jin visiting Ohio, which is said to be in the running for the plant; a Korean newspaper also had reported that Ohio was at the top of the list for the proposed $1 billion plant, but spokesman Park Sang-woo told Reuters, “We still don’t have specific information, including a location and an investment figure.” Hyundai officials and those at subsidiary Kia have said the plant decision would be made in the first half of 2002 and that Kia vehicles would also be produced at the plant.
How High is Up for Hyundai? by Jim Burt (11/12/2001)

FORD ENDING FIRESTONE BUYOUTS
Ford is giving customers to the end of March to participate in its buyback of what it considers faulty Firestone tires. Ford has spent some $3 billion replacing a total of nearly 9.5 million tires not covered by the original 6.5-million tire recall triggered in August of 2000. Ford CFO Martin Inglis says the company wants to encourage consumers to take part in the program, and estimates the company might spend another $400 million on replacing the tires, which are suspected in 271 deaths and thousands of injuries.
Ford Minus $5.5 Billion In 2001 by Joseph Szczesny (1/21/2002) 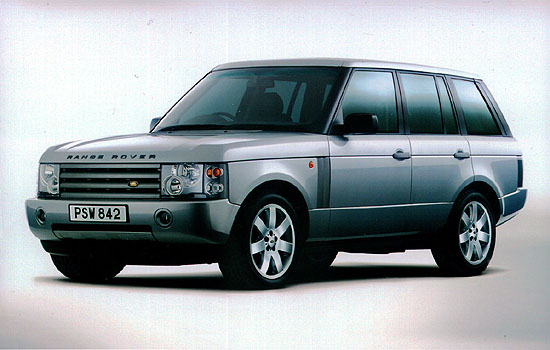 It’s only the eighth new product ever built by Land Rover but, in the unanimous opinion of the biased and unbiased gathered at Scotland’s Skibo Castle to drive the ’03 Range Rover, it’s by far the best yet. Engineered in part under BMW, finished off with Ford and uniquely nurtured by Land Rover from its rubber mats to its exquisitely soft-finished hardwood trim, the new Range Rover is as substantial and refined as sport-utility wagons get. Editor Marty Padgett takes you along for the ride today at TCC:
2003 Land Rover Range Rover (1/21/2002)

CHRYSLER BRAGS ON MANUAL SEBRING
For the first time in the car’s history, Chrysler’s Sebring convertible will sport a manual transmission. The new model, dubbed the Sebring Convertible GTC, carries Chrysler’s 200-hp, 2.7-liter V-6 engine and a five-speed gearbox as its powertrain; if you’re into retro, last year’s four-speed automatic is still available as well. Also included in the GTC package: anti-lock brakes, 16-inch painted wheels, a shorty spoiler, and a CD player. Base price for the vehicle on sale in mid-April is $25,710, which includes $595 for destination.
Chrysler Locks in Product Program by Joseph Szczesny (1/20/2002)

CAFE STAYS PUT IN 2004
This week’s official announcement of 2004 CAFE standards shows no change in the fuel-economy policy — but the Bush Administration’s National Highway Traffic Safety Administration (NHTSA) isn’t making any promises about 2005. For 2004, the NHTSA says the standard for light trucks will stay at 20.7 mpg, but the agency, led by Dr. Jeffrey Runge, has been openly considering a rise in the standards for both cars and light trucks. The current standards were set in 1975 when the Corporate Average Fuel Economy rules were written.
Cargirl: Breeding Hybrids by Lesley Hazleton (1/20/2002)

CHRYSLER STARTS FIXING MINIVAN TANKS — FINALLY
The Chrysler Group has begun the repair of some 1.3 million minivans recalled for fuel leaks — a recall first announced in September of 2000. The company says it lacked the proper parts to repair the involved vehicles, which were built between 1996 and 2000 and which features 3.3-liter or 3.8-liter V-6 engines. The common problem in the vans? A fuel-line seal near the engine that’s prone to failure.

LOTUS ELISE TO U.S.
After a long delay since its late-1990s introduction in Europe, Lotus Cars USA says it will federalize and import the teeny Elise two-seat roadster to the U.S. in 2003, according to reports from AutoWeek magazine. Lotus Cars USA CEO Arnie Johnson told the weekly that the Elise will sport a 120-hp engine and will cost $38,500 when it goes on sale in the States. The Elise will replace the Esprit, which ends a decades-long run in the same year.

CTS, EXT IN MATRIX SEQUEL
Cadillac’s outreach program to the Korn generation hits the big screen next year as the CTS and Escalade EXT show up in The Matrix Reloaded, the sequel to the gazillion-dollar-making original featuring Laurence Fishburne and some other less capable actors. The Cadillacs will be featured in a “breathtaking” chase sequence, according to a GM press release. "We've incorporated the CTS and EXT into the most elaborate vehicle chase scene ever filmed," said Joel Silver, producer of the film. "It's beyond the wildest imagination and is truly spectacular." The second Matrix installment comes out in the summer of 2003.
Preview: 2003 Cadillac CTS by TCC Team (8/20/2001)

TLC CALLING ALL GEARHEADS
Tired of diving into a tank of fetid squid just to win $50,000? The Learning Channel is looking for a few of you who can bend sheet metal and create rolling battle machines for fun and notoriety. The cable channel, in tandem with RDF — the highbrows that brought you Junkyard Wars (not the Bronte sisters’ version) — are looking for teams of three who can create all-terrain, all-combat vehicles that will take on what they describe as “the most devilish obstacle course ever.” Applications are due in February and must include a five-minute videotape; click over to www.ultimatemachinecombat.com for more data.