OVERCAPACITY ON THE RISE
The situation continues to get worse in terms of excess global production capacity, noted auto analyst William Pochiluk, of AutoCompass. With new car demand slipping around the world, and likely to drop notably in the U.S. this year, Pochiluk estimates there's the equivalent of "95 modern assembly plants’ worth of excess capacity worldwide." That would be enough to more than supply the U.S. market, he added. There've been only modest reductions made in recent years, and more than enough new capacity to replace what's been taken off-line. That's one reason Volkswagen is unlikely to build a new plant in the U.S. anytime soon, cautioned VW Board Member Jens Neumann. Many analysts expect Ford to shutter some of its plants as part of its upcoming turnaround plan, though COO Nick Scheele is offering hints that might not happen. Meanwhile, GM CEO Rick Wagoner said his company could address its own overcapacity in North America by trimming production, rather than closing any assembly plants. 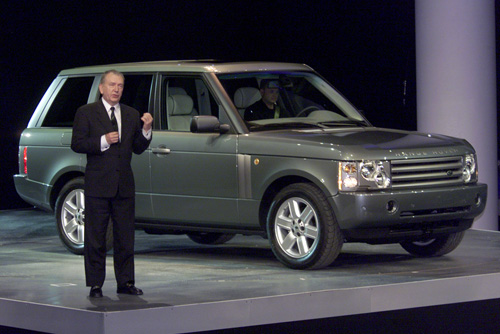 RANGE ROVER HAS BMW BACKGROUND
It's not a good idea holding your breath waiting for new models from Land Rover. The automaker has only introduced eight of them in its half-century existence, and only three versions of its flagship SUV, the Range Rover. That drought ended on Tuesday, when the British marque unveiled the newest Range Rover, which will go on sale in Europe next month, and reach North American shores by June. "We feel this vehicle will totally transform Land Rover's reputation," declared Wolfgang Reitzle, the head of the Premier Automotive Group of Ford Motor Co., which owns the U.K. company. The new Range Rover is equipped with a 4.8-liter V-8 and full-time all-wheel-drive. Not a single dimension has been carried over, Reitzle noted, and even the badge has been subtly redesigned. But more than anything, Ford has focused on fixing Land Rover's endemic quality problems: it traditionally ranks in the bottom tier, often behind the Koreans. "The only way to spoil (the launch), Reitzle admitted, "would be bad quality." Ironically, development work on the new Range Rover began when the carmaker was owned by BMW, where Reitzle was, at the time, second-in-command. Land Rover was sold to Ford about the same time the executive left BMW. In his new position, he was able to finish work on the vehicle. 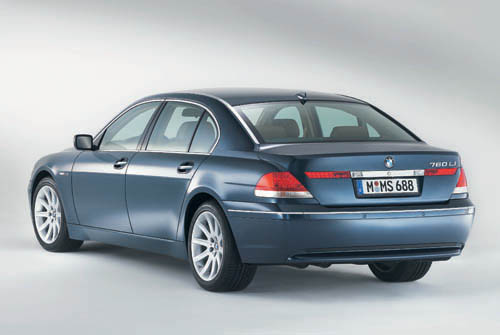 BMW GETS 12 CYLINDERS
Borne by controversy, BMW brought its new range of 7-Series sedans to the Detroit show, and spearheaded its press conference with the 760Li, the long-wheelbase bruiser with BMW’s new V-12 engine. The 6.0-liter aluminum V-12 makes about 400 hp and features direct injection and four valves per cylinder. A six-speed automatic harnesses the power and helps it rocket from 0 to 60 mph in 5.9, BMW says. Top speed is 155 mph. The center console features BMW’s iDrive controller, a controversial joystick device that controls many of the car’s secondary functions, like navigation and climate control. Critics have taken issue with iDrive and with the car’s rear styling. 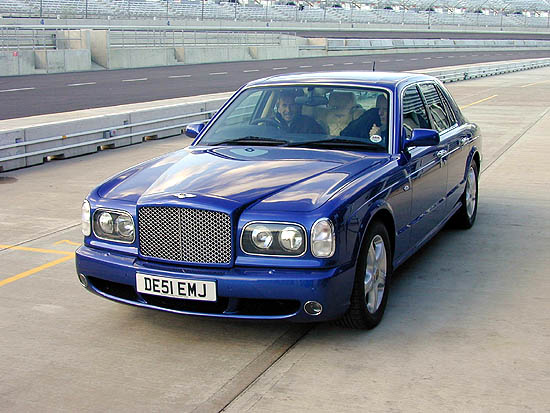 BENTLEY CLAIMS FASTEST SEDAN
Does Bentley have the fastest sedan in the world? So they claim with the latest version of the Arnage four-door saloon, which should be able to accelerate from zero to 60 mph in just 5.5 seconds and should have a maximum speed of 170 mph. With a heavily modified 6.75-liter V-8 engine making 450 hp, the Bentley also has a body that is stiffer than the original Arnage, which was already the stiffest body shell Rolls/Bentley had ever produced. Bentley refers to it as the Series 2 Arnage, and the modifications will be introduced on the Red Label cars later this year. The suspension has been tweaked for the increased performance, and to help the driver cope with the enormous performance potential, this is the first Bentley to be equipped with an Electronic Stability Program, which uses an electronic brain to prevent loss of control.
2002 Bentley Arnage T by Ian Norris (1/7/2002)

INFINITI PRICES G35 AT $27,100
The midsize, rear-drive Infiniti G35 will be priced from $27,100, company officials announced at the Detroit show. The G35 sports a 260-hp V-6 engine, a five-speed automatic transmission, and a six-disc changer in the dash. With leather, the price rises to $28,950. The sedan is to go on sale in March, but before it does, Infiniti and its dealers are opening the order books. As of yesterday, buyers can price and order G35s on the Web, at a dealer, or by filling out an information card on a brochure.

GM GETS (VIRTUALLY) UP CLOSE AND PERSONAL
General Motors has begun rolling out a new Internet service that will let consumers get up-close-and-personal, and learn a lot more about their individual cars in the process. MyGmLink.com will provide more than 80 pages of personalized information, some so precise it responds to the vehicle's specific VIN number. Among other things, owners will be able to check service manuals, locate service centers and get e-mail recall notices. They'll also be able to post some information of their own, including pictures and any nicknames for their cars. The program is already in place for many Pontiac and Chevrolet models, and should cover all U.S. GM brands shortly. By year's end, a range of additional countries will get access to the service, including Japan and Australia. "We're trying to build a one-to-one-to-one relationship" between factory, dealer and customer, said the project's director, Stu Dressler. He admits the automaker has some ulterior motives: MyGMLink could help drive business to GM dealers and parts distributors, and increase loyalty rates, which translates into repeat buyers.

ONSTAR GOES CUSTOM
Meanwhile, GM's OnStar unit will launch its own customized service, [email protected] Users with the right services and equipment will be able to check and set their home alarms, monitor video cameras linked to the Web, even close their garage doors or adjust thermostats by remote control. Asked about the potential for outsiders to breach the new system, Mark Hogan, director of the eGM unit operating OnStar, asserted "It is a concern you are raising, but we have put security systems into place to protect our customers.”