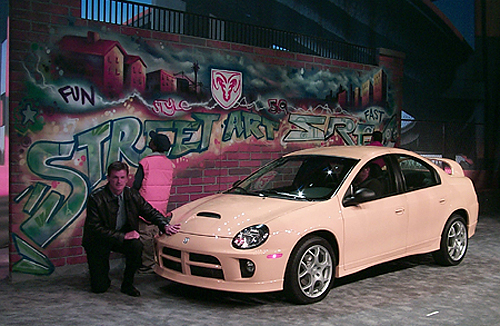 NEON AIMS FOR FAST, FURIOUS
The SEMA crowd shows its love to the Honda Civic and the Ford Focus — and that makes the folks at Dodge a little jealous. That goes a long way in explaining the Dodge Neon SRT-4, a 205-hp Neon that’s meant to deliver self-made looks and performance to a whole new crowd. The Neon SRT, Chrysler says, will be the fastest production car available in the U.S. for less than $20,000. At $19,995 it sports a 205-hp, turbocharged 2.4-liter four-cylinder engine with 220 lb-ft of torque, good for a 0-60 sprint of 5.9 seconds and top speed of 148 mph, they claim. Also in the package: a heavy-duty five-speed manual gearbox, dual exhausts with steel tips, 17-inch alloy wheels, four-wheel discs and a six-speaker CD stereo, cladding and a big rear spoiler. Chrysler CEO Wolfgang Bernhard says the SRT is a reasonable cue from the company that brought you the Viper: “People want us to build something sweet for the street,” he told crowds while his jacket was spray-painted by street artists creating a graffiti backdrop behind the screaming-yellow SRT. Dodge’s John Hernandez adds, “We really need to go after the Honda Civic — go after them on the dragstrip, on the street, everywhere like we did when the Neon first came out.” 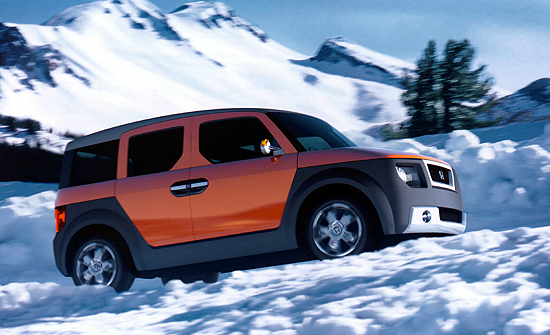 Honda’s barrage of new product in 2002 will begin and end in an unconventional way, the company hinted at yesterday’s L.A. auto show press conference. The company will launch five new models in calendar year 2002, says sales chief Dick Colliver. First out of the box will be a 50-mpg Civic with a hybrid powertrain similar in principle to the Insight; a Civic Si hatchback built in England follows in spring. The Honda Pilot will be the brand’s first eight-passenger SUV when it is launched later in the year. The Model X, the funky SUV with center swing-out side doors and a flat load floor designed for active younger buyers, will enter production before the end of the year. And the venerable Accord is to be replaced by an all-new and, Honda says, dramatically new model in the fall.

VW PRICES W8, ADDS GLI
Volkswagen’s sales resurgence in America spiked its sales to more than 355,000 cars last year, and the brand’s product assault isn’t over — in addition to the Turbo S New Beetle TCC’s reviewed for you this week, VW will sell its first eight-cylinder car here within the calendar year. The Passat W8 will offer an unusual 271-hp eight-cylinder engine in the current Passat sedan or wagon body, along with a leather interior, a power sunroof and air conditioning for $37,900. And later in the year, the company will reintroduce the Jetta GLI, a trim level high on performance and slightly lower on price. With a 200-hp VR6 engine, an Electronic Stability Program, 17-inch wheels, a six-speed gearbox and sport suspension tuning, the GLI will sticker at $22,950. A similarly powered GTI VR6 joins the lineup at the same time, for $21,175. 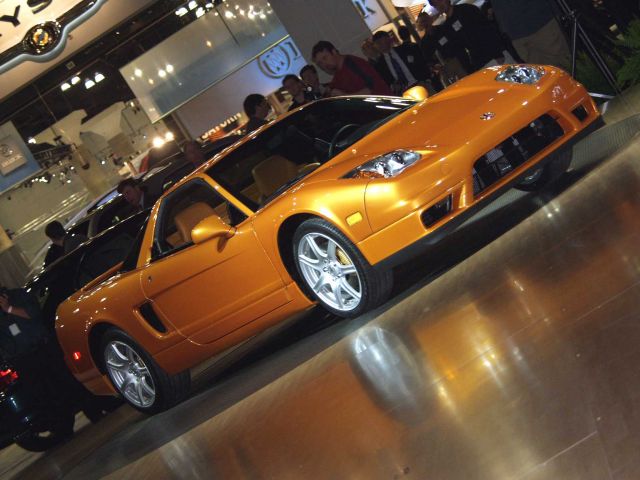 ACURA REFINES CL, NSX
With its MDX sport-ute setting sales records, Acura’s spending some money and attention on its two-doors in 2002 and 2003. First, the decade-old NSX receives a welter of refinements. Although there’s no horsepower boost, aerodynamic massaging of its air dams and hood help it pick up 7 mph; top speed is now 175 mph. Revised interior trim and monochromatic paint treatments mark the $89,000 ‘02 model, and six new interior colors allow buyers to match the inside and outside of their treasured supercar. As for the CL, it gets a light update outside, with a more prominent grille and other detail work. The Type-S model engages a new six-speed manual transmission and a limited-slip differential; a five-speed automatic SportShift is available on the Type-S. All CLs have new center console designs, too. 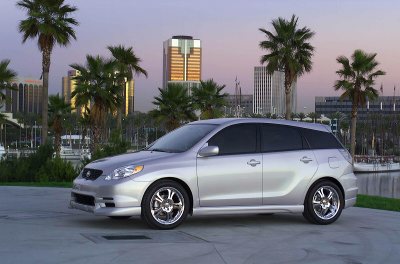 MATRIX ON THE CHEAP
Pricing for Toyota’s Matrix starts at $14,670, the company told audiences at the L.A. Show. For that price, buyers get a five-door wagonlet with a 130-hp engine, air conditioning, and a CD player. The midlevel Matrix XR retails for $16,180; the XRS, with the 180-hp four-cylinder and anti-lock brakes tops the range at $18,750.
Tags:
auto Body Cheap Engine Los Angeles Auto Show Paint 2002 Auto Shows Volkswagen News Volkswagen Passat News
2021
The Car Connection
See the winners »
2021
The Car Connection
See The Winner and Nominees »