AUTO SALES COULD REMAIN STRONG
The new car market may not take nearly as sharp a plunge as expected once zero-interest loan programs wrap up, Ford COO Nick Scheele tells TheCarConnection.  That runs counter to what most analysts have been forecasting, with some expecting sales to slump to as low as 14 million, in part because this year’s incentives could be “borrowing” sales from 2002.  “It really is entirely possible,” Scheele concedes.  “There’s got to be some payback,” unless zero-rate incentives prove so effective, “they stimulate the whole economy.”  That might more than offset pull-ahead sales lost during an otherwise weak year, according to Scheele.  Supporting that theory, he points to the recent upturn in overall retail economic activity, which was largely the result of surging car sales.  So far, Ford analysts estimate that the zero-interest loans have pulled ahead about 750,000 units of car and truck sales from 2002.
Zero Percent Stays at GM, Ford by Joseph Szczesny (11/19/2001) 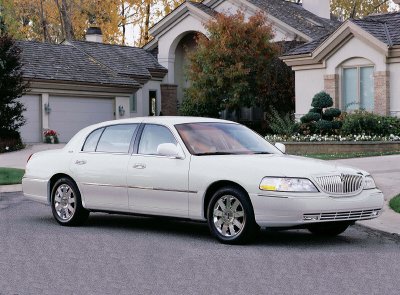 Ford is taking a step forward into the past with an old-is-new Lincoln Car.  Stung by criticism of the current, jellybean-styled Town Car, Ford is rushing a revised model into production next spring. The ’03 Lincoln four-door goes retro, borrowing heavily from the previous-generation, slab-sided sedan.  “We’ve squared it off,” noted Ford’s design director, J Mays, adding that future Lincolns will go even further in that direction.  The boxy shape has a practical purpose, significantly improving trunk space, which was perhaps the single most common complaint about the current Town Car.  Ford engineers promise the ’03 model’s new frame, brakes and front suspension will maintain the Town Car’s cushy ride while significantly improving steering and handling. As many as half of the sedans are sold as limousines and fleet vehicles.
TCC 2002 Buyer’s Guide: Lincoln by Bob Plunkett (10/1/2001)

VOLVO HAS XC90 FOR DETROIT 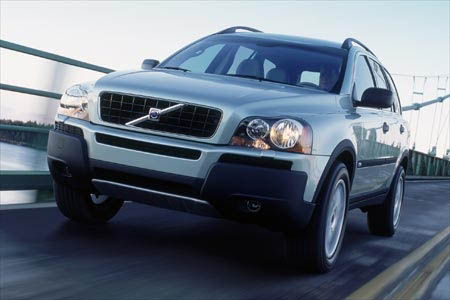 The XC90, a new all-wheel-drive wagon from Volvo, will bow in a month in Detroit. Volvo says that the XC90 "seats seven persons comfortably and safely in seven forward facing seats." Details about its "advanced safety technologies" will be issued in Detroit. The only details, in fact, that were announced about the vehicle aside from pictures were the two powerplants, a twin-turbo six that may be the same as in the S80 T6 (273 hp) and a five-cylinder common-rail diesel with 163 hp, that will especially be of interest for the European market. The XC90 goes on sale in the fall of 2002.

SAAB GETS BUSY FOR DETROIT 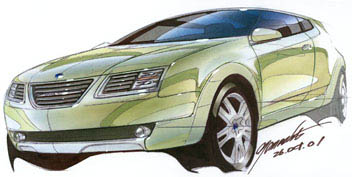 Saab engineers are getting busy for January’s Detroit auto show. Just four months after the Frankfurt debut of the 9X concept, the company will show off the 9-3X concept at the annual Motown sheetmetalfest. The 9-3X is likely a closer cousin to the replacement 9-3 due in the 2003 model year; as a concept, it’s said to “set the pace for a new style of all-terrain motoring.” Most importantly, the vehicle is said to be a showcase for all-wheel drive and crossover capability. "The Saab 9-3X concept represents further expression of the sporty, multi-dynamic design philosophy already established by the Saab 9X performance concept at the Frankfurt auto show," said Saab Automobile's CEO Peter Augustsson in a release. "The 9-3X will also integrate aspects of the design language you can expect to see in future Saab products." Saab plans one new concept or product for the next six years, the same release said.

NISSAN ON NEW QUEST IN DETROIT 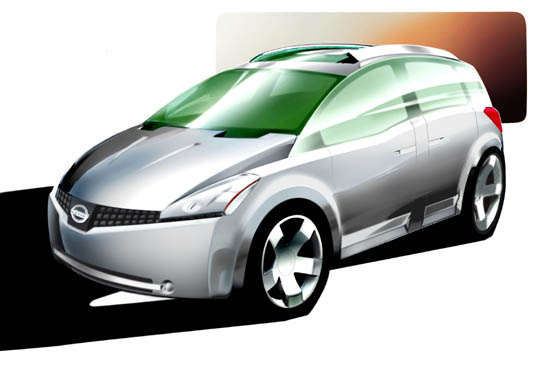 With its minivan partnership with Ford about to expire, Nissan said yesterday that it’s planning a brand-new minivan of its own for the 2004 model year. The Quest Concept, to be shown at January’s Detroit auto show, will point the direction for the next Quest, which apparently doesn’t share any parts with the Renault Espace, as has been rumored around town. The six-seat Quest Concept, Nissan says in a release, will be a departure from typical minivan styling, with flowing lines and 20-inch wheels. The tailgate is powered, and the roof is largely glass, for better cabin illumination. The current Quest and the nearly identical Mercury Villager — built on the same assembly line in Avon Lake, Ohio — are set to exit their respective lineups after the 2002 model year.
Driving Forces: Product is King by TCC Team (11/19/2001)

TOYOTA EXTENDS ZERO PERCENT
If you’re looking for a 2001 Toyota Corolla, Tundra or 4Runner for less, buy before January 2. That’s because Toyota, bowing to momentum set by the Big Three, is extending its zero-percent financing on those models into the New Year. With the announcement, Toyota becomes the fourth company to reach into 2002 with zero percent; GM says its program will end on January 2, with DaimlerChrysler and Ford pushing on as far as Jan. 18th.
Zero Percent Stays at GM, Ford by Joseph Szczesny (11/19/2001)

JEEP STEPPING AWAY FROM RUBICON?
It has always billed itself as the ultimate off-road machine. And to prove that point, every Jeep ever made has been designed to survive the tricky Rubicon Trail, considered the ultimate in off-road challenges. But does that matter in a world where the bulk of SUV buyers are soccer moms and suburban commuters? That’s the question the Jeep division has been asking itself lately, and the answer is likely to lead to a revolution at the DaimlerChrysler division. “Jeep has always been underutilized by having too narrow a definition of what a Jeep can be,” Chrysler Group chief designer Trevor Creed has confided to TheCarConnection. Will future Jeeps ditch the Rubicon test that’s defined the brand? Publisher TCC Team reports in today’s edition of TheCarConnection.com:
A Revolution at Jeep? (11/25/2001)

MASERATI PLOTS U.S. RETURN
After a 10-year absence, Maserati plans to christen its comeback in the U.S at the 2002 Los Angeles Auto Show. Now part of Fiat's Ferrari Group, Maserati says it will show off its new Spyder at the L.A. show in early January. "We will be debuting the 2002 Spyder in North America at the Los Angeles Auto Show," Stuart Robinson, president and CEO of Ferrari/Maserati North America, said in a statement last week. The new Spyder is expected to sell for nearly $90,000 when it goes on sale early next year.
Maserati to Debut at L.A. Show (11/25/2001)

FOCUS ON THE RECALL WAGON AGAIN
Ford’s Focus is the company’s latest model to be recalled. Some 279,646 Foci — 2000 and 2001 model-year vehicles, all — are being recalled over a rear-wheel seal that can corrode and cause the rear wheel assembly to vibrate and wobble. The vehicles are being recalled in 21 nasty-weather states and six Canadian provinces. The latest recall is the 2000 Focus’ seventh since it went on sale in 1999.

GEICO BILLS GO ASTRAY IN ANTHRAX AFTERMATH
The anthrax scares in the Northeast have sent GEICO Direct back to its databases, reinstating policies cancelled while customer checks sat in limbo in D.C. post offices, USA Today reports. The Washington, D.C.-based auto insurer says that many customers sent in payments on time, only to have the main D.C. area postal sorting facility closed when anthrax-laced envelopes were sent to members of Congress. The paper quotes a GEICO spokesman as saying several thousand premium payments were sent to Ohio for decontamination, instead of being posted to insurance policies. The company advised customers to cancel their original payments and send new checks; regular mail delivery has resumed at GEICO offices.

U.S. AUTOMAKERS OWN MIDSIZE SUVS
J.D. Power’s latest Market Assessment Study proves out what many of us take for granted: that American brands own the midsize SUV segment. The Power data survey found that domestic midsize SUVs like the Dodge Durango, Chevy TrailBlazer and Ford Explorer have taken more than 70 percent of their market niche since 1990, unlike the trend in other niches where American makes have lost ground. Power’s study observes that, unlike other segments like family sedans, the midsize SUV segment isn’t overwhelmed by competing foreign entries, although Honda’s coming MDX-based SUV and the Toyota Highlander/4Runner combination could boost the import challenge.
A Revolution at Jeep? by TCC Team (11/26/2001)

…BUT SCORE POORLY IN IIHS TEST
While they may own the SUV segment, domestic SUV makers aren’t meeting the standards suggested by the Insurance Institute for Highway Safety (IIHS) for crash protection. The IIHS said on Thursday that both the new Ford Explorer and Jeep Liberty would cost about $1400 to repair in a 5-mph crash, earning them a “poor” rating. The IIHS judged the Chevrolet TrailBlazer as “acceptable” and the Dodge Ram 1500 pickup as “marginal.”
Family Matters: Buying Safe Cars by Carol Traeger (11/12/2001)

CHRYSLER RECALLS PT, GRAND CHEROKEE
DaimlerChrysler issued a recall Thursday, for its popular PT Cruiser sport wagon and Jeep Grand Cherokee sport-utility vehicle. In both cases, computer software might cause the car’s instrument panel to go dark. The company reports no incidents from the problem, but will recall some 43,000 of the 2002-model vehicles to fix improperly programmed microchips.
Cargirl: The PT Miata? by Lesley Hazleton (11/26/2001)

Hot vehicles: The good news is that Bureau of Justice Statistics indicate a long-term downward trend in vehicle theft.  In fact, figures for 2000 show only 8.6 in 1,000 people reported being the victim of auto theft, which is the lowest figure since the bureau began keeping those records in 1973. In spite of this progress, hundreds of vehicles are still stolen every day. According to Experian Automotive's National Vehicle Database, just under one percent of the 260 million vehicles in operation are reported stolen. Unfortunately, less than 60 percent of these vehicles are recovered by the police and returned to their owners.
For more information, go to www.experian.com.