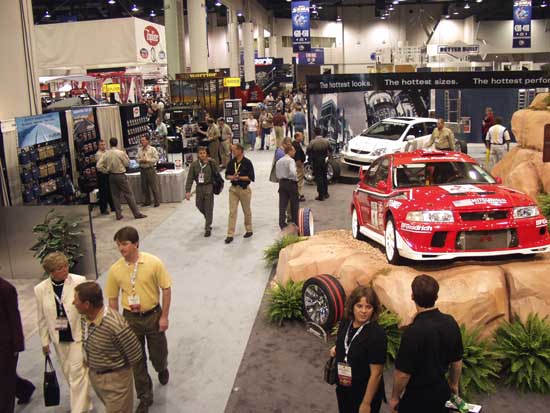 Call it an automotive extravaganza. The annual Specialty Equipment Market Association convention is the world’s largest gathering of auto aftermarket suppliers, and strolling through the wide aisles of the Las Vegas Convention Center month, you could find everything from air fresheners to high-performance “crate” engines.

In all, Americans will spend more than $25 billion to improve the performance or just dress up their cars this year, said SEMA President Charles Blum. That doesn’t even include mundane repair and replacement parts, like air filters or fan belts.

The third-largest annual event in Sin City, SEMA’s Aftermarket Week traditionally provides a clear sense of consumer trends—as well as an indication of the overall health of the auto industry. And this year was no exception.

A thousand points of speed

As an organization, SEMA is a hodge-podge of thousands of different automotive parts manufacturers, ranging from Ma-and-Pa garage operations to multi-billion-dollar enterprises like General Motors’ Service Parts Organization, or SPO. Accordingly, the miles of aisles at the Convention Center were filled with just about every possible product.

In recent years, SEMA vendors have shifted their focus to appeal to the growing population of pickups, SUVs and other light trucks. But this year, the truck side of the aftermarket is down, according to association members, a clear indication that the U.S. economy has been slowing.

Yet despite that downturn, sales of products for the so-called “compact performance” market is “so hot,” said Blum, “they can’t keep it on the shelf. But that’s because the 18-to-25-year-old males (who make up the bulk of the compact performance market) don’t worry about where next week’s paycheck is coming from.”

Thanks to the compact performance segment, aftermarket sales are likely to post a very slight increase in sales this year, SEMA data suggest, but well short of the double-digit growth the industry had posted over the last decade.

The big question is what happens next year. Zero-interest financing has provided a kick-start for the new car market, and that’s likely to build momentum for aftermarket parts and accessories. “In that regard, the mood of the show is quite favorable. It’s almost business as usual, which in this business is good,” said Dick Wells, long-term Hot Rod magazine editor, and still a member of the NHRA board of directors.

But once those cut-rate financing programs end, automotive analysts predict a sharp slump in volume, and SEMA members could share that pain. Blum said his biggest concern is an escalation in the current war on terrorism. A widened call-up of military age men could put the brakes on aftermarket sales, since they make up a disproportionate share of the market.

The September 11th terrorist assaults threatened to kill off this year’s SEMA show, entirely. At one point, Las Vegas officials considered canceling all conventions and events for 60 days, but they reversed their decision and Aftermarket Week went off as planned. Attendance was down a bit, with a virtual boycott by the traditionally large Asian contingent.

“I think the show’s been impacted in two ways,” said Ron Coleman, president of Competition Cams, “fewer foreign visitors due to the uncertainty of getting here, and because Asia continues to have serious economic problems. Plus some of the people….on the periphery, not in the core businesses, decided not to come. But it’s a good show and our industry is healthy.”

For years, SEMA itself was on the periphery when it came to major automakers, but in recent years, it has become decidedly mainstream, as carmakers trip over each other to win their share of attention. The floor of the Convention Center was filled with company-funded custom rigs, this year, many of them sponsored by General Motors, the corporate sponsor of the 2001 SEMA show.

There are several reasons why automakers such as GM have become more actively involved, noted Robert Triulzi, director of accessories operations for GM’s Service Parts Organization, or SPO. For one thing, it can generate a lot of sales. It’s not unusual for a customer to add hundreds, even thousands of dollars worth of accessories to a new vehicle.

GM, Ford and other carmakers have been vying for a larger share of the aftermarket business in recent years. Nissan took advantage of the show to announce that it will start selling its NISMO line of high-performance parts next autumn.

The carmakers are also working with outside vendors—often making available detailed technical specifications—to expand the range of aftermarket parts available for their products. “That enhances the personalization of our vehicles,” explains Triulzi, “and the more they can personalize our vehicles, the more likely people are to buy them.”

So, despite the uncertain economy and the national malaise triggered by the 9/11 assault, it was as close as possible to business-as-usual at the SEMA show. And barring further setbacks, the mood of the organization’s members remains cautiously upbeat.