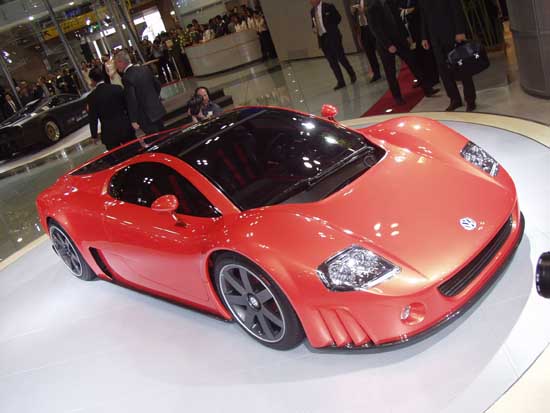 PERFORMANCE AT ANY PRICE? Volkswagen’s new CEO is giving all-but official confirmation the automaker will put its W-12 supercar into production. “I love it, but the question is whether customers will love it,” cautioned Bernd Pischetsrieder of the 600-horsepower two-seater, noting that a final decision should be made within a matter of months. A track-ready version of the 2640-pound W-12 set 10 separate speed and endurance records earlier this month. The prototype shown in Tokyo can soar from 0-100 kmh (62.5 mph) in 3.56 seconds and hit a top speed of 350 kph (219 mph). As for price, “a half million,” Pischetsrieder declared, “currency to be defined.” 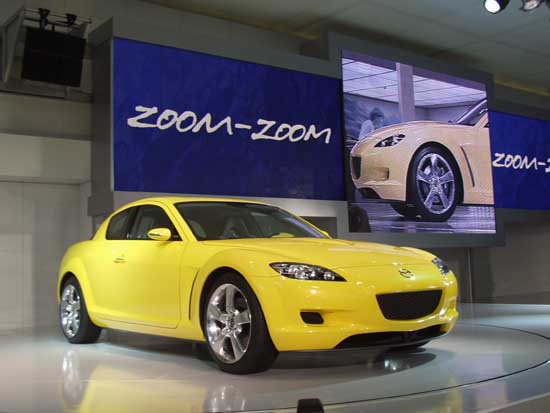 ZOOM-ZOOM BOOM. Mazda will be flooding the market with “the most focused product blitz our company has ever launched,” said the Japanese automaker’s youthful CEO, Mark Fields. There’ll be 16 new products for the Japanese market over the next three years, 11 for North America and nine for Europe. These include an all-new mid-size sedan, dubbed the Atenza in Japan, and the Mazda 6 for the U.S. The only thing in common with the current 626, Fields quickly added, “is that they both have four doors.” Mazda also used its Tokyo Motor Show news conference to reveal the final, production-ready styling of the long-awaited Mazda RX-8. The four-door sports car will make its appearance in showrooms “very early in 2003,” and Mazda is betting its unexpected roominess will win it fans among those who normally couldn’t accept sports car compromises. A rumored price of $25,000 to $30,000 “is somewhere in the ballpark,” according to Fields. He also noted the automaker’s interest in seeking other applications for the all-new Renesis rotary engine. 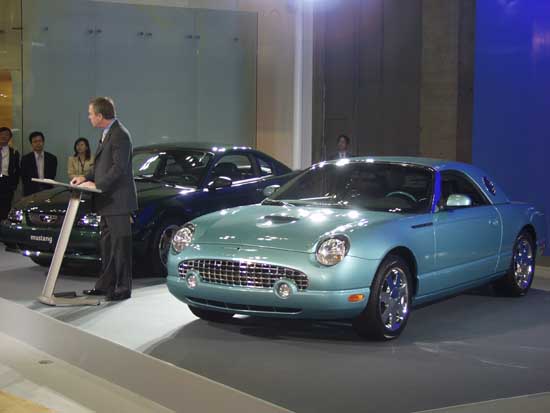 FORD FALLS BACK. After spending more than a decade trying to build itself into a mainstream Japanese nameplate, Ford has decided to retrench. It will focus on its other brands, including Mazda and Volvo, and let the flagship Ford nameplate serve a small niche audience. As a result, there was little new from Ford in Tokyo other than Japanese versions of the Thunderbird and Mustang Bullitt. “We’re really acknowledging Ford can’t be a volume brand” in Japan, admitted Asian operations director Henry Wallace. “I don’t know if it is a retreat. I don’t know if the other strategy was sustainable.” Until recently, the automaker had tried propping up the Ford of Japan brand with rebadged Mazda products, with annual sales peaking at nearly 90,000.  This year, they’re headed for the 12,000 mark, according to Wallace, though he said “We hope over time it will (grow to) 25,000.”

IMPORT IMPACT. Japan’s demand for foreign-made vehicles continues to lag behind that of other major markets, and is expected to barely reach 10 percent this year, or well under 1 million units, according to industry sources. Ford’s fallback stresses the hard lessons many imports have learned. General Motors also has been de-emphasizing imports, though it believes it can succeed where Ford failed, by partnering with its Suzuki affiliate to produce the new Cruze, “an Asian car for Asian buyers.” It’s the first Japanese-made GM product since 1929. There have been a few import successes. Volkswagen expects to see sales grow by seven percent this year, to 53,000, which would give them more than a quarter of the overall Japanese market. The automaker believes it could soon top 70,000. Ford’s Jaguar subsidiary is also riding a wave. Fueled by the new X-Type, Jag sales hit an all-time monthly record in September, and the automaker expects to set its third consecutive annual sales record for 2001. 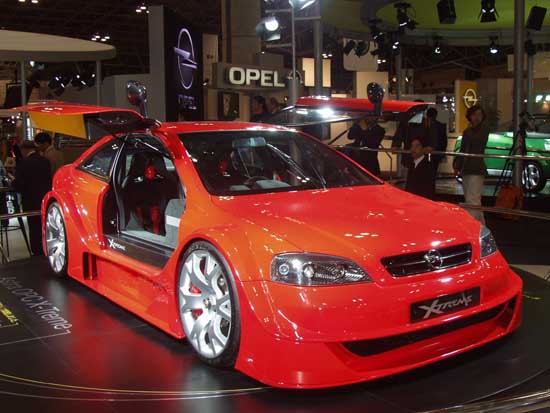 OPEL AT THE XTREME. There’s a high likelihood Opel will put its edgy Astra Coupe Xtreme into limited production, new CEO Carl-Peter Forster told TheCarConnection. The 444-horsepower Xtreme made its debut at the Geneva Motor Show last March and has generated a lot of unexpected orders, even though it’s not currently on Opel’s official schedule. “We’re talking to a number of people” said Forster, to see if they would really be willing to buy the sports coupe. Admitting he’s leaning towards giving Xtreme the go, Forster said, “We’ll make a decision within the next (few) months.” 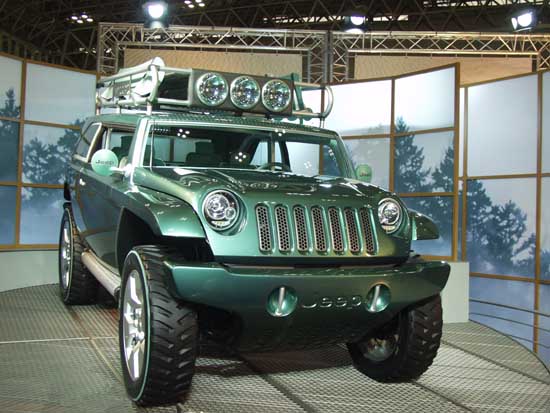 TONING DOWN EXPECTATIONS. “Jeep has always been underutilized by having too narrow a definition of what a Jeep can be,” Chrysler Group chief designer Trevor Creed confided in TheCarConnection. Until now, any prospective new Jeep model has had to leap some tall hurdles. Most ntably, they’ve had to be able to navigate the incredibly rough Rubicon Trail, considered the mecca for serious off-roaders. That seems likely to change in the next few years, and the Willys II concept vehicle could be the shape of things to come at the new Jeep. An updated version of the show car seen in Detroit last January, it still is four-wheel ready, but boasts more modest off-road capabilities than the Wrangler or new Liberty. “We’re not going to be using (the Rubicon Trail anymore) for every vehicle,” said Creed, “because it’s inappropriate.” While the hard-edged Willys II is just a styling exercise, Creed conceded Jeep is serious about adding an affordable new model that would be priced below both Wrangler and Liberty. He wouldn’t offer a timetable, but insiders say it could hit market by mid-decade. 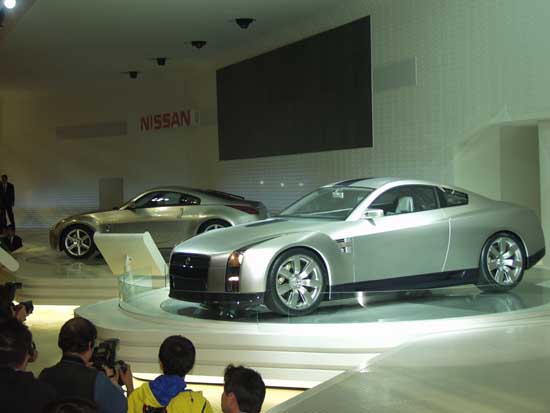 GHOSN FOR THE GOLD. It’s time to stop talking about turnarounds and start going for market leadership, asserted Nissan’s ever-confident CEO, Carlos Ghosn. The automaker’s fast-paced preview gave some insight into the direction Nissan will take as Ghosn pulled the wraps off eight separate show cars and crossover vehicles covering virtually every major segment of the Japanese market. Among the most notable prototypes, Ghosn promised Nissan would roll out an all-new version of its popular GT-R sportster, but this time it will be sold around the world, rather than just Japan. Meanwhile, Nissan lifted the wraps off the production-ready Fair Lady Z—that’s the 350 Z for Americans. The long-anticipated sports car will carry a price of “under $30,000, according to Ghosn.” 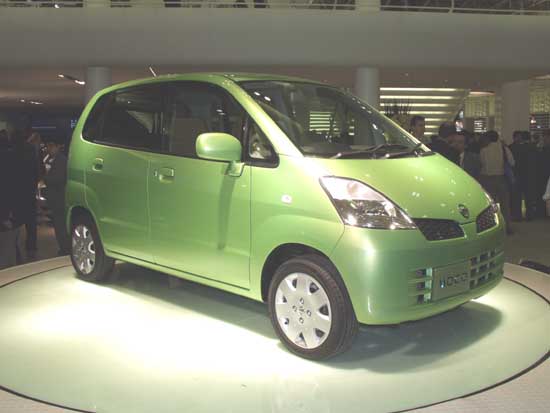 The Moco prototype suggests the direction Nissan plans to take as it enters the huge Japanese minicar market. Powered by a 660-cc engine, it is “ideal for young, active mothers,” Ghosn declared. The subcompact MM, meanwhile, is the update of the long-lived March, featuring a new, electronic four-wheel-drive system and abundant storage compartments. 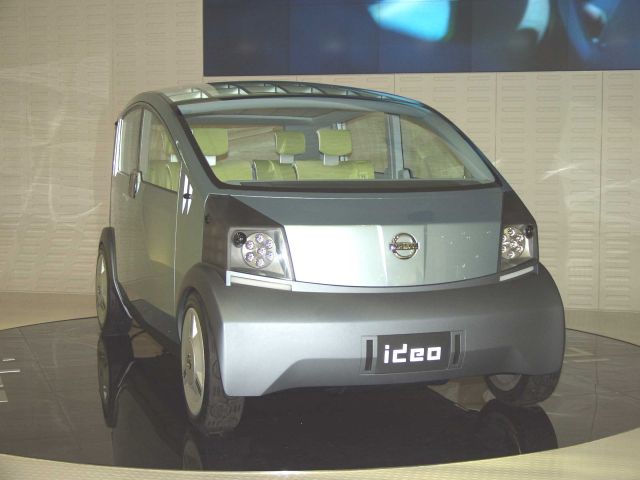 Borrowing a page from Ford’s controversial 24/7 prototype, Ghosn unveiled the Ideo, a “telematics-enhanced car.” Loaded with an array of telematics and other high-tech equipment—including an instrument panel made of a reconfigurable video display, Ghosn suggested one think of the Ideo as “a (computer) mouse you control not with your fingertips, but with the steering wheel.” 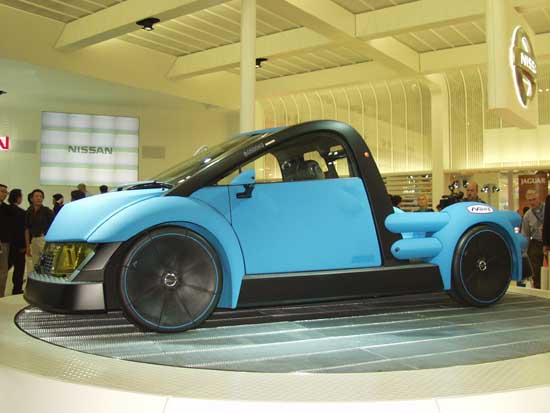 There’s plenty of high-tech gear aboard Nissan’s Nails, as well. The show car offers a very different way of thinking about what a pickup truck should look like. The front end of the high-styled Nails looks more like a sports car. The tailgate opens in gullwing fashion. Ghosn wouldn’t reveal which of the prototypes are headed for production, but he did note that Nissan plans to introduce 13 new models in its 2002 Fiscal Year, with “no less than” seven more new models to come in each of the following years.

GOING GREEN? In recent years, the biannual Tokyo Motor Show has taken a very aggressive position on environmentalism. “Green” cars were the hallmark of the Honda and Toyota displays in 1997 and 1999. But talk of environmentalism was decidedly more subdued at the 2001 Tokyo show. It came up in a number of speeches, but was never the dominant issue. And often, the focus was more on the subject of hip new technology—such as fuel cells—rather than on the potential environmental payoff. “When we talk about the environment, it’s not as easy to illustrate as design or technology,” Nissan CEO Carlos Ghosn told TheCarConnection. It may be that consumers simply expect tomorrow’s cars to be more environmentally friendly, suggested another industry official. It’s no longer a matter of debate, so now the industry needs to deliver low emissions on all vehicles and focus on other product differentiators at shows like Tokyo.

NASSER’S NOT GOING ANYWHERE. While Ford's CEO declined to discuss rumors of his impending departure, he didn’t seem like a man ready to dust off his resume. Asked if he’d still be sitting behind his desk at Ford this time next year, Nasser told TheCarConnection, “I certainly hope so.” He also acknowledged that the media frenzy “isn’t helpful” and has been diverting management attention at Ford. “We would prefer this (coverage) to go away, of course.” Nasser also sidestepped questions about the upcoming Ford reorganization, though he hinted it will likely affect just about every aspect of the automaker’s operations. The Lebanese-born executive admitted he was caught by surprise by the depth of the company’s current problems. “We were on a roll,” he said, until the Firestone tire issue blew up. The terror assaults on September 11th only made things worse. Asked what he’s learned from these various crises, Nasser said “You learn how quickly the competitive situation can change and how rapidly some external factors can influence the business in a profound way.”

UPSIDE-DOWNSIDE. The current economic crisis in the U.S. isn’t likely to end in a hurry, many industry leaders conceded during conversations at the Tokyo Motor Show. “Based on everything we’ve seen in recent months, the U.S. economy probably has more downside than upside,” Ford CEO Jac Nasser told TheCarConnection. At the same time, there are indications that U.S. auto sales may outperform the rest of the economy. If you’re willing to offer enough incentives, Nasser added, you can sell almost as many cars as you’d like. Ford will decide next week whether to extend its zero-percent financing campaign. GM is stretching its own program through at least mid-November.

THANK YOU, SIRE, MAY I HAVE ANOTHER. “We didn’t have an assignment to count the number of butts Bob Lutz kicked,” said General Motors CEO Rick Wagoner. But the legendary car-guy-cum-GM-product-czar is very quickly getting to work, revising the way the automaker thinks about future vehicles, many company sources reveal. “It didn’t take him 15 minutes until he got a feel of what’s going on,” Wagoner said of Lutz. “He’s got a feel of how to drive change without getting people mad at him.” During his visit to Tokyo, Lutz visited each of GM’s alliance partners, Suzuki, Isuzu and Subaru, and reportedly offered some thoughts on how they would best work with his company in the future. 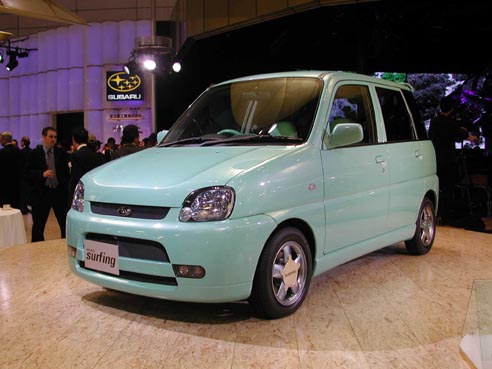 Subaru Pleo Surfing
Subaru designers used the image of a computer nerd nimbly "surfing" the Internet as an image for this concept vehicle. This sporty compact with a roomy and "pop interior" is engineered for nimble city driving.