Connect with our dealer and finance partners through our site and ask for details regarding their at-home car buying services.
OK
HomeNewsPaint

TOKYO MOTOR SHOW OPENS TO PRESS
The world’s most recent auto show in Frankfurt was overshadowed by the Sept. 11 terror attacks. Now, the Tokyo Motor Show hopes to override global concern for terrorism as it opens this week to the media. The Tokyo show, true to its tradition, will host a slew of Japanese-brand product introductions, including the Mazda 6 midsizer and the production version of the Nissan Z, along with the world debut of the Mini Cooper S and the usual array of baffling idea cars unveiled by tiny girls in white gloves and funky outfits. TCC is on the road this week in Tokyo to bring you coverage from the show floor; until then, content yourself with our Tokyo preview and come back often this week for the latest unveilings.

GAS PRICES UNDER A BUCK?
Earlier this year, America’s drivers were warned that gas prices might be headed for $3 a gallon. This week, a few stations across the nation are reporting prices for a gallon of regular unleaded at less than $1. What gives? Various sources cite the Sept. 11 terrorist attacks and a steep decline in travel as one reason for the price drop. The Oil Information Service, a source cited by Reuters, says that the average price of unleaded is $1.358 a gallon across the country, versus $1.529 before Sept. 11. Drivers in the West are paying the most as usual, with those in the southeast paying the least, but overall, the Department of Energy says that prices are at their lowest since January of 2000.
Gas Prices Spike, Then Fall by Marty Padgett (9/17/2001)

VW UNVEILS D1 LUXURY FOUR-DOOR
Can the company that made its name selling cheap and basic transportation find a niche in the luxury car market? Volkswagen is clearly set to give it a try. The company is showing just what its D1 upmarket sedan is going to look like when it rolls into dealer showrooms next spring. They’re keeping a few details up the corporate sleeve—like the name of the production car — but yesterday they released pictures, engine specs and some other data. The D1 will be bigger than any other passenger car Volkswagen has ever built, measuring 199.2 inches long by 74.8 inches wide; and there will be two engines offered at launch, a 3.2-liter, 241-horsepower V-6 and a 6.0-liter 420-horsepower W-12. Other engines, including a 313-hp 5.0-liter, V-10 direct-injection turbodiesel, will be added later. There’ll be a new, six-speed automatic for the V-10 TDI, too.
VW Unveils D1 Luxury 4-Door by TCC Team (10/15/2001) 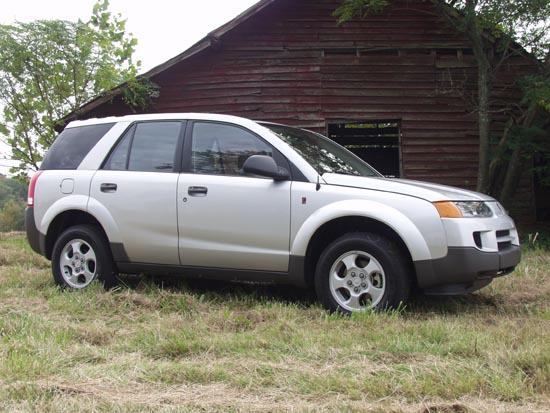 VUE: NEW VISION FOR SATURN?
It was meant to be the American answer to the Japanese small car. But after an auspicious introduction, General Motors has allowed its Saturn brand to languish, raising serious questions about its long-term viability. So all eyes will be on the VUE, Saturn’s third and newest model, when it makes its debut next month. With trucks and crossovers now accounting for half the American market, this car-based sport-ute is likely to be the most significant Saturn since the marque’s 1989 debut. But it will be essential for the automaker to avoid the sort of mistakes made two years ago, with the botched launch of the mid-size L-Series sedans and wagons.
VUE: New Vision for Saturn? by TCC Team (10/15/2001)

FUEL CELLS VIABLE, STUDY FINDS
A new study commissioned for the California Fuel Cell Partnership says that vehicles powered by the new technology can be commercially viable, but will only succeed with help from the federal government. The study, cited by a Reuters report, says that commercial applications for fuel cells will come along sooner if carmakers agree to use compressed hydrogen and agree on ways to reformulate hydrogen from liquid fuels such as gasoline. Fuel cells release electric energy from hydrogen, usually by passing the hydrogen through a membrane that breaks hydrogen molecules apart and captures the electricity generated during the chemical process, converting it into mechanical energy and emitting only water vapor. Each of the Big Three automakers, as well as many of the Japanese and German brands, have predicted fuel cells will be in service sometime in this decade.
DC, Ford Boost Ballard Shareby TCC Team (10/8/2001)

HONDA OUT OF CART
Adding to the woes of the CART open-wheel racing series, Honda now says it won’t field a team after the 2002 season, citing recent rules changes that make it prohibitively expensive to develop a new, competitive engine. CART’s new 3.5-liter engine specifications, says Honda, won’t enable it to develop an entirely new engine while continuing work apace on its current race engine. "This decision is a great disappointment to Honda as we have informed CART from the beginning of the process that it is impossible to supply a new engine conforming to their proposed specifications prior to the 2004 season," said Tom Elliott, Honda’s president of performance development, in a statement. Since 1994, Honda has won 60 races and three championships in the series.

CART SETTLES WITH TEXAS SPEEDWAY
A lawsuit filed by Texas Motor Speedway against CART has been settled. In April, CART cancelled what would have been the inaugural Firestone Firehawk 600 two hours before race time, in response to concerns raised by drivers in the series. The racing organization says that 21 of 25 drivers practicing on the speedway, which is banked to an unusually steep 24 degree, experienced dizziness as they reached speeds nearing 230 mph. Bruton Smith, owner of the speedway, said both sides were happy to put an end to the controversy: "We have reached a favorable agreement and are glad to have this behind us," Smith said. Terms of the settlement were not made public; at this point, no CART race is scheduled for 2002 at the Texas track.

DODGE BACK IN UNIFORM
After a twelve-year absence from the police-car market, Dodge will once again don police markings in 2002 with a version of the ’02 Intrepid R/T. In the past, Dodge fielded many of the nation’s police cars, spun off from various Plymouth, Dodge and Chrysler passenger sedans. The new police R/T, with its 242-hp V-6 and front-wheel drive, has been undergoing testing with the Auburn Hills, Mich., police department. The company hopes to sell as many as 60,000 copies each year.
Review: American Police Carsby Eric Peters (8/27/2001)

CHEVY PREPS INTIMIDATOR MONTE CARLO
Dale Earnhardt’s the subject of another commemorative edition — only this one’s on wheels. The Intimidator will be honored in the ’02 model year by a special Monte Carlo SS Dale Earnhardt Signature Edition that is now in production. The special Montes will be black with a red racing stripe and Earnhardt’s signature inside and out; other equipment includes leather seats, special gauges, 16-inch wheels and traction control. The model had been planned with Earnhardt in early 2000: "Dale's magnificent NASCAR career earned him not only respect on the track but also many friends in daily life," said Kurt Ritter, Chevrolet's general manager. "When we started discussing this project with him, he took it as an honor to have his legendary status commemorated with such a special vehicle." Chevrolet says 3,333 copies will be made; Earnhardt ran under the number 3 until his fatal crash at Daytona in February 2001.

HIGHLANDER IN TOYOTA RECALL
Some 41,169 copies of Toyota’s crossover Highlander wagon are being recalled to fix a brake problem, the National Highway Traffic Safety Administration (NHTSA) said on Monday. A possible air leak in the Highlander’s brake system could lead to longer stopping distances, and thus increase the risk for an accident, NHTSA said. All the recalled Highlanders are 2001 models.

FEWER YOUNGER NEW-CAR BUYERS?
During the past 14 years, the under-35 year old age group has gone from a 37.3-percent share of the light vehicle market (1988) to 24.4 percent in 2001, according to J.D. Power and Associates Power Car and Truck Media Reports. The drop is even more extreme for the under-25 year old age group, which went from 11.2 percent of the market (1988) to 6.0 percent (2001), a reduction of 48 percent. This change in demographics could have major implications for new-vehicle marketing, advertising and promotional programs.

POWER: PEOPLE WANT HIGH-TECH AIRBAGS
The next generation of airbag technology is high on the list of safety-related equipment desired by new-vehicle buyers, according to the J.D. Power and Associates 2001 Automotive Performance, Execution and Layout (APEAL) Feature Contenting Report(SM) released today. Safety-related features such as airbags and vehicle control systems continue to be among the most desired equipment consumers would like to see in new vehicles. Head protection/side curtain airbags are the most desired new feature; while only seven percent of vehicles currently have these new airbags, 66 percent of new-vehicle buyers expressed a strong interest in seeing them in their next vehicles. Side impact airbags, which are currently in 28 percent of new vehicles, continue to increase in popularity, ranking highest among emerging features in all eight super segments in the report. An average of 77 percent of respondents want such airbags on their next car.
Power Shows Slower Gains by Jim Burt (7/16/2001)

U.S. PLANT TALK HEATS UP FOR HYUNDAI
Hyundai Motor president Kim Dong-jin’s recent visit to the U.S. has rumormongers speculating on an American assembly plant for the carmaker once more. Korea’s Maeil Business Newspaper reports the company is looking closely at Alabama — home of the Mercedes-Benz M-Class plant and a new plant for Honda sport-utes — as its leading candidate for a new North American factory. The newspaper says Hyundai will begin construction on a $1 billion facility next year. A specific site was not mentioned in the report; Mercedes’ plant sits next to I-59 between Tuscaloosa and Birmingham, while Honda’s factory is located near Talladega, on I-20 between Birmingham and Atlanta.
2002 Hyundai Elantra GT by Bob Hall (10/15/2001)

ALFA RETURN DELAYED
Alfisti will be disappointed to learn that General Motors and Fiat have decided to postpone the Italian marque's return to the U.S. Fiat will not retrofit current model Alfas to meet U.S. federal requirements for 2003; now, all-new models will enter the U.S. as 2005 model year cars. A new Alfa Spider is due in 2005 and a replacement for the 156 small sports sedan should come the following year. A high-end 166 model is tentatively due in 2007. Originally GM said Alfas would share showrooms with Cadillac but they are now leaning toward selling the Italian brand through Saab dealerships, both in here and in other markets where they are not currently sold. — Bob Storck

CHEAPER CUSTOM COLORS COMING
Getting a custom color for a new car or truck is going to get easier and cheaper. PPG Industries and Behr Systems Inc. are testing their Dynamic FlexColors system to meet the five-day car standard and use in conventional paint shops on a just-in-time basis. The paint guns normally must be cleaned for a new color, but the new system allows pigments to be added to get new colors similar to a color printing cartridge for a computer printer. They're aiming for 2003 as a start-up date.— Mike Strong