GM TO DEBUT MAJOR V-8 IN FRANKFURT
TheCarConnection.com has already given an extensive preview of the highlights of the upcoming Frankfurt auto show, including the Opel Signum II, a General Motors concept car based on GM’s Epsilon architecture. And it is relatively common knowledge that the Epsilon platform will be shared by the next generations of the Chevrolet Malibu, Pontiac Grand Am, Saab 9-3 and Opel Vectra. Digging a bit deeper into the story, however, TheCarConnection.com has unearthed some significant details about the all-new 4.3-liter V-8 that gets its first showing under the hood of the Signum II in Frankfurt. The 75-degree-vee pushrod V-8 is a world-market-ready direct-injection gasoline engine. It features three valves per cylinder and GM’s cylinder deactivation system. The engine uses the gas/pneumatic direct-injection setup developed by Orbital Engine and Siemens. And while the V-8 is mounted transversely in the Signum II, its design allows for longitudinal placement as well.
'01 Frankfurt Show Preview by Henny Hemmes (8/13/2001)
Frankfurt Show Preview II by Ian Norris (8/27/2001) 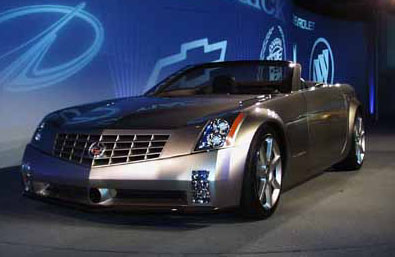 MORE DETAILS ON THE CADILLAC XLR
The Cadillac XLR roadster—the production version of the Evoq showcar—will be appearing late next year or early in 2003 as a 2003 model. General Motors has confirmed that the two-seat XLR will be powered by GM’s venerable 4.6-liter Northstar V-8 driving the rear wheels via a 5-speed automatic transmission. The General hopes that the XLR will bring Cadillac back into favor with affluent U.S. buyers who have of late been leaning toward sporty luxury cars from Europe and Japan. In 1997, Cadillac was the top luxury brand in America; today, it is struggling to make the first-tier cut. The 2003 Cadillac XLR roadster will be built at the same Bowling Green, Kentucky facility that produces the Chevrolet Corvette.
Preview: 2003 Cadillac CTS by TCC Team (8/20/2001)

2002 HONDA ODYSSEY: WATCH OUT, CHRYSLER
Almost as a calculated response to Chrysler’s recent model and pricing announcements for its fleet of 2002 minivans, Honda’s recent launch of its 2002 Odyssey van appears destined to add fire to an already competitive fray in family haulers. Already recognized as a smart buy by industry watchers like J.D. Power and Associates and IntelliChoice, and by publications that range from Car and Driver to Consumer Reports, the Honda Odyssey is already a solid household name. For 2002, Honda comes to the competition with a 240-horsepower V-6, a standard 5-speed automatic transmission, and front and side airbags for the driver and front-seat passenger. Honda also reports that the 2002 Odyssey is the first minivan available with a factory-installed DVD player.
2001 Honda Odyssey by Dan Carney (6/18/2001)

MERCEDES-BENZ MAYBACH: ULTRA-LUXURY TRADITION BREAKER
Consider this: The Mercedes-Benz three-pointed-star logo doesn’t carry enough cache to do the company’s new Maybach model justice. According to a report in Automotive News, Mercedes plans to launch the Maybach—a largely hand-built, no-expense-too-great, uber-luxury sedan along the lines of Rolls-Royces and Bentleys (and then some)—as a brand unto itself. Not even the three-pointed star hood ornament of Mercedes-Benz—after Coca Cola logo, probably one of the most recognizable symbols in the universe—will appear on the car. Instead, the company has chosen to adorn the Maybach hood with a double-M logo inside of a triangle, a historical reference to Maybach Motorenbau, a small carmaker from the early part of the 20th century with deep ties to Mercedes. The Maybach, due for launch in 2003, will feature a 500-plus-horsepower V-12 inspired by two turbochargers. It will ride on a new type of adaptive, electronically controlled air suspension. Stopping power will be provided by a quick-response brake-by-wire system. And the price? Mercedes-Benz spokesman Fred Heiler speculated, "…double, triple, I don’t know how much more it’s going to be over a current Mercedes product, even a high-end Mercedes product." Thus the need, according to Heiler, for giving the Maybach a brand all its own.
Benz: What's In A Brand? by TCC Team (3/12/2001)

HONDA FIELDS A HYBRID CIVIC
In Tokyo yesterday, Honda Motor Company introduced a hybrid-power Civic sedan. The new subcompact uses a small-displacement gasoline engine and an electric motor which work together to optimize fuel economy. Honda says that the hybrid Civic should get around 68 miles per gallon of gas. It is scheduled to go on sale in Japan later this year, followed by a spring introduction into the U.S. market. No price has yet been announced.

GM MAKES A DEEPER COMMITMENT TO SATELLITE RADIO
Moving technology and profit potential forward on parallel paths, General Motors Corp. says that it will offer XM Satellite radio as an option on at least 20 of its 2003-model-year vehicles. GM, which owns 12% of XM Satellite Radio Holdings Inc., is already gearing up to put satellite radio in 2002 Cadillac Seville and DeVille models later this year. The idea behind satellite radio is that by subscribing to the service, you can "personalize" your radio programming and get clear reception anywhere you’re driving. XM Satellite plans to begin beaming 71 music channels (many commercial-free) and 29 news, talk, sports, comedy and children’s channels beginning on September 12. The subscription price will be $9.95 per month.
Auto Tech Talk: Satellite Radio by TCC Team (4/23/2001)

PORSCHE SIGNS UP WITH SIRIUS AND XM SATELLITE RADIO
As the industry gears up for the future of in-car broadcasting, satellite radio deals are gaining momentum with automakers. A few weeks ago, BMW of North America announced that it was contracting with Sirius Satellite Radio Inc. (which also has Ford and DaimlerChrysler on its roster). This week, General Motors outlined its plans to offer XM Satellite Radio as an option on 20 of its 2003 models next fall (along with Honda). Now Porsche Cars North America has decided that more is better, and has cut a deal with both Sirius and XM. Satellite radio is a subscription-based option that allows customers to "personalize" their listening by offering digital-quality radio playing dozens of channels covering nearly every imaginable style of music and format. Porsche’s dual-service deal will allow it to offer clients more than 100 channels of music, talk and sports. The company expects to begin offering satellite radio on all Porsche models in two to three years.
Auto Tech Talk: Satellite Radio by TCC Team (4/23/2001)

TOYOTA AND SONY DEVELOP A CAR WITH A.I. (BUT WITHOUT SPIELBERG)
Toyota Motor Corporation and Sony Corporation have joined forces to develop a car incorporating "artificial intelligence capabilities." For its part, Toyota has been pursuing ITS (Intelligent Transport System) technologies designed to make cars safer and easier to use. Sony brings lots of experience in robotics to the table, as well as its formidable electronics expertise. The first fruits of this partnership between the Japanese giants, a prototype vehicle, will be unveiled at the Tokyo auto show in October. 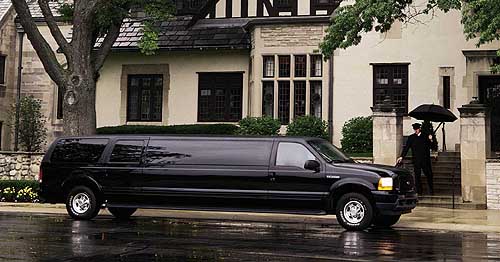 EXCURSION LIMO? ABSOLUTELY, SAYS FORD
Already dominating the carriage trade with the Lincoln Town Car, Ford has approved and certified its Excursion platform for limousine conversions, the first Qualified Vehicle Modifiers (QVM) conversion for an SUV. Despite some aftermarket modifications of Expeditions and Navigators (some of these done before the Lincoln was in the showrooms) the Excursion is ideal for the severe-duty service typical of limousine operation. "There were a lot of converters in the market doing non-certified Excursion limos on their own," said Paul Anderson, Excursion Fleet Marketing Manager. "Our certified package provides Ford Motor Company support to ensure the finished vehicles are up to customers’ high expectations and safety standards." Ford has owned the limo market since GM went to less-preferred front-drive platforms. With both GM and Chrysler going to rear-drive large cars in the near future, Ford and Lincoln seem to be cementing their stake in the market, even offering an enlarged trunk in future models to correct an oversight on the current Town Car.
— Reported by Bob Storck for TheCarConnection.com.

PEUGEOT ANTICIPATES A RETURN TO AMERICA
In a remark that could go down as the understatement of the year, PSA Peugeot-Citroen Chairman Jean-Martin Folz called the United States a "significant" automotive market. He also intimated that the French automaker was certainly considering a return to the U.S. market, possibly as early as 2005. Folz’s comments came at a Paris conference organized on behalf of French companies by the French securities firm HSBC-CCF. In Western Europe, only Volkswagen has a bigger piece of the automotive market than PSA, and on a number of occasions Folz has outlined ambitious plans for further expansion of PSA’s product lines. "That does not mean we will definitely go [into the U.S.] in 2005 or 2006," he said coyly, "but perhaps we will." Interestingly, Folz made his speculations on August 6, 2001, exactly ten years to the day that Peugeot announced its withdrawal from the U.S. in 1991.