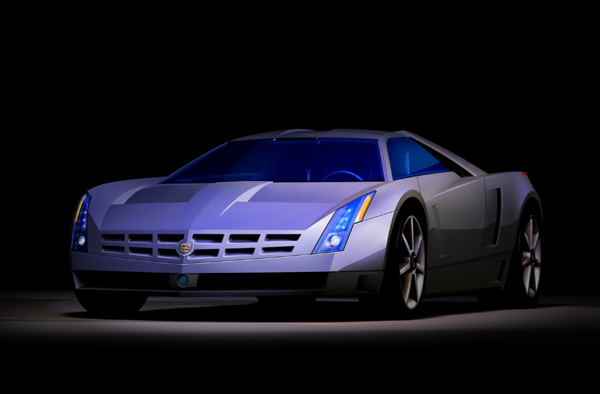 Long, sleek and sexy, the Cien is the type of vehicle one might to see carrying a Ferrari, Lamborghini, or perhaps even a Mercedes-Benz badge on its nose. But the edgy “Art and Science” grille is unmistakable. Spanish for 100, and designed to celebrate the automaker’s upcoming centennial, the supercar concept is aimed at lifting the long-ailing Cadillac into a new league. But one might say that of all three of the newest General Motors concept vehicles that were rolled out for a media sneak peek in recent days. The Cien, Saturn’s Sky convertible and the GMC Terra4 are anything but perfect, and insiders readily admit at least two of the three will go through significant revisions before they take their public bow at the North American International Auto Show next January.  But together, the three prototypes show the sort of creative “right brain” thinking that’s been in all too short a supply at the giant automaker in recent decades.

Ford Motor Co. has agreed to settle a lawsuit involving up to five million vehicles with allegedly faulty ignition switches, effectively bypassing the litigation that would undoubtedly taken years to resolve. In settling the suit, Ford will replace ignition switches on all Ford vehicles under 100,000 miles that have stalled. Some 500,000 to 650,000 vehicles affected are in California, where the lawsuit was filed. The proposed settlement comes four months after a Superior Court judge ordered up to two million vehicles recalled as part of a statewide class-action suit. The company had argued that the judge did not have the same authority as does the National Highway Traffic Safety Administration to order a vehicle recall. Ford, the judge said, had concealed shabby parts from government inspectors. Ford had said it would appeal the recall order. The judge had said Ford concealed the stalling information from federal safety regulators.

Bridgestone/Firestone’s attorney in the first tire-defect case to go to trial says Ford, not the tiremaker, is to blame for the accident that resulted in the injuries to a Texas family. The lawyer, Knox Nunnally, said he would show that tread separation does not cause the type of accident suffered by the family when its 1998 Ford Explorer rolled over after one of its tires blew out in March 2000. “While Firestone is responsible for the tire, Ford is responsible for the safety of the entire vehicle,” Nunnally said. “The Ford Explorer is uncontrollable at highway speeds.” Some 203 U.S. traffic deaths and more than 700 injuries have been linked to tires made by Bridgestone/Firestone. In August 2000, Firestone recalled 6.5 million tires, many of them on Fords. Since then, Ford has recalled more tires for a total of 13 million tires, an action unsupported by the tiremaker.

Think you’re preserving your life and others — and in New York, avoiding prosecution — by installing a hands-free car phone? The National Safety Council (NSC) begs to differ. The nonprofit, non-federally-funded organization says that talking on the phone while driving represents a significant distraction regardless of whether the phone is hands-free or handheld. The study also indicates, says the NSC, that the distraction of talking while driving is markedly higher than that of the car radio or audio books. The study nearly coincides with a release by the National Highway Traffic Safety Administration (NHTSA), which suggests that some three percent of drivers are talking on their phones at any given moment. 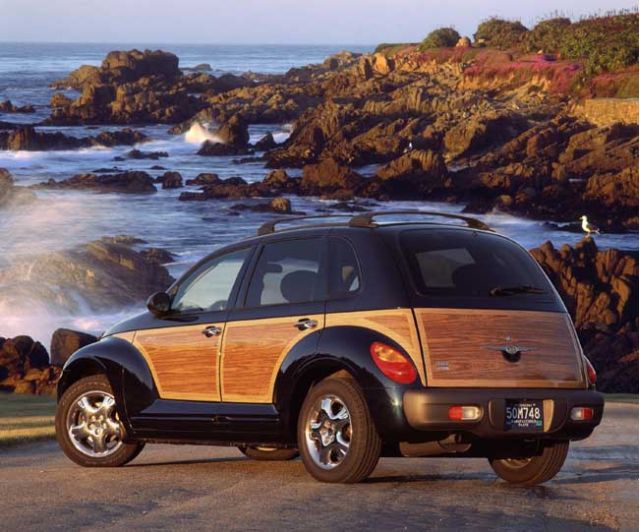 Chrysler will be offering a series of special PT Cruiser vehicles, dubbed “Series 1”, starting in February. The vehicles will list for just under $24,000 with an automatic transmission. And the vehicles will be limited edition, with just 7500 to be made in two (so far) different flavors—a “Woodie” and “Flame” model (at $895 and $499 extra, respectively). The cars are meant to fit in with the custom car theme of the Annual Woodward Dream Cruise (held on the famous boulevard this weekend north of Detroit). Even the “regular” PT Cruisers are hard to keep in showrooms, with the company working to expand total Cruiser production capacity from 200,000 to more than 310,000 by the end of next year. The vehicles are made in Toluca, Mexico, and Graz, Austria.

A Saab concept car? Not likely, when you consider the Swedish automaker has only done it twice before. But that’s what the unit of General Motors intends to do, whetting the motoring appetite with a high-performance vehicle that might (the very idea behind the term “concept”) go into production. Saab’s 9X concept, to be shown in Frankfurt in September, combines features normally associated with four different vehicle types: a roadster, sedan, coupe and pickup truck. Saab chief executive Peter Augustsson called the vehicle “a statement of intent,” making the comments in a news release apparently sent out earlier than initially intended. The vehicle, which has a small rear seat, all-glass top and wraparound windshield (to the B- or center-pillar of the car above the door line), is the first visible work of chief designer Michael Mauer, who joined Saab after 14 years with DaimlerChrysler. Saab plans to double its product lineup over the next five years, thanks largely to the deep pockets of GM. The last time Saab unveiled a concept at an auto show? The EV1 sport coupe in 1985.

The Atlanta Journal-Constitution reports that Don Panoz is negotiating to build electric vehicles for DaimlerChrysler in a new plant in south Georgia. Panoz is the real estate and pharmaceutical billionaire currently building Panoz AIV roadsters and Esperante coupes in northeast Georgia. In addition to his fledgling car company, Panoz owns Chateau Elan, a resort and winery near Winder, Ga., and owns a handful of racetracks including nearby Road Atlanta. The newspaper predicts the electric vehicles would be used in tandem with the city’s mass transit to provide some relief for Atlanta’s traffic. The Journal-Constitution reports that Panoz’s new company, eMotion Mobility, would be responsible for building as many as 5000 electric vehicles in the joint venture, which it reports will be made public at next month’s Frankfurt auto show. However, DaimlerChrysler officials were unaware of the project when contacted by the paper on Friday.

In the first major makeover of the Toyota Camry in five years, the automaker has leaked a few details ahead of the 2002’s official debut in September. The car, which is priced lower than the current model, comes in a new SE model, which is made to appeal to a younger driver, with chrome exhaust outlet and logos, special performance tires and special-look wheel covers among other features. The new Camry is larger with an increase in horsepower (to 151) but with better gas mileage.

Got $50K? You might want to look at an Escalade EXT. GM says it will cost $49,990, the same price as a regular Escalade, for the truck-bedded version of its premium sport-utility vehicle, meant to compete with Lincoln’s truck offering, the $52,500 Blackwood, which is to hit showrooms this month. Look for the EXT to debut in January. Both the EXT and Blackwood have a pickup bed behind a row of seats, but the EXT also has a passenger cabin cargo door, a “midgate” in GM’s description. The GM vehicle will come with a 6.0-liter V-8 pushing out 345 horsepower. The Blackwood’s 5.4-liter has just 300 horsepower. The EXT is seven inches longer, with the bed extending to 97 inches when the cabin cargo door is converted.

Talk about sticker shock. When Alan Must put down deposits for two new Thunderbirds, he expected to pay full price -- but not $15,000 over the $39,000 MSRP. He’s suing the dealer, McLaughlin Ford of Royal Oak, Mich., alleging the dealer broke an oral agreement to sell the cars at list so it could cash in on the demand for the retro roadster. McLaughlin Ford, formerly Royal Oak Ford, said it never quoted a price and has the right to sell for whatever the market will bear. While automakers generally discourage markups, dealers are not bound by the “suggested” price and it happens—more recently with the Chrysler PT Cruiser and Audi TT Coupe, both of which went for much higher than MSRP. A trial is scheduled for January, although the dealer is not prohibited from selling the cars in the meantime.

Mercedes-Benz will next month unveil at the 59th International Automobile Fair in Frankfurt, Germany the concept for a vehicle that can detect an imminent collision and engage occupant protection systems before it occurs. Known as PRE-SAFE (for “Preventive Occupant Safety”) the experimental Mercedes-Benz safety concept combines hazard-detection technology currently in use in Mercedes-Benz passenger vehicles with new types of seatbelt tensioners and automatically adjusting seats. Future versions of the concept would include active body structure and interior components, as well.

An 80 mile-per-gallon car? Sure. But who could afford it? That seems to be the reason the National Research Council says the Partnership for a New Generation of Vehicles, established under the Clinton administration to facilitate the development of a so-called “supercar” capable of correspondingly super gas mileage might need a rethinking. More realistic aspirations might be significant fuel-economy gains by light trucks, SUVs and pickup trucks that account for half of all new-vehicle sales in the U.S. Indeed, the sales of these vehicles have increased as a percentage of total vehicles since the PNGV program was put in place. The report also points to the likelihood of higher fuel consumption due to new clean-air rules that will make the use of fuel-saving diesel technology more challenging.

MetLife Auto & Home announced that it is introducing the company's innovative "Teens on the Road to Safety" program to its auto insurance customers in Tennessee. [The company also announced similar programs in Pennsylvania, Connecticut and New Hampshire.]  The purpose of the program is to establish good driving habits during teens' first years on the road- by offering cash incentives and savings bonds, simply for developing safe driving techniques. Two components of the "Teens on the Road to Safety" program provide these financial incentives. The first, "Drive Safe and Cash In," offers teens a chance to earn $50 each year they drive without accidents, claims, or violations.  It also encourages them to drive safely, buckle up, and never drink and drive. Another component, called "Sunday Drive," offers teens the opportunity to earn a $100 U.S. Savings Bond for logging 20 drives with a parent or guardian in the co-pilot seat. Teens insured by MetLife Auto & Home in Tennessee can take advantage of the program as their auto policies renew.