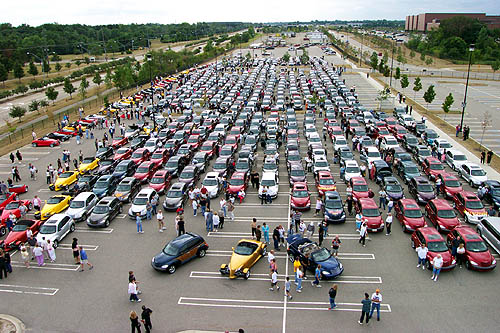 More from the 2001 Woodward Dream Cruise

BIRMINGHAM, Mich. — Why does Pebble Beach get more coverage in automotive magazines (yes, and automotive Web sites) than the Woodward Dream Cruise?

Is it a better show? No. Who wants to see Ralph Lauren’s Duesenberg yet again, which he paid fifteen gazillion dollars to someone else to restore, when you can see gorgeous machines of all stripes (see below) which have been (mostly) lovingly restored by the guys you see driving them?

Is it a bigger show? Not close. Pebble is lucky to draw maybe a few hundred cars, maybe 10,000 spectators. Try 40,000 and 1.4 million respectively for Woodward.

It’s a shame the two events have to be on the same weekend. But here’s a small sampling of what those effete snobs in California are missing: 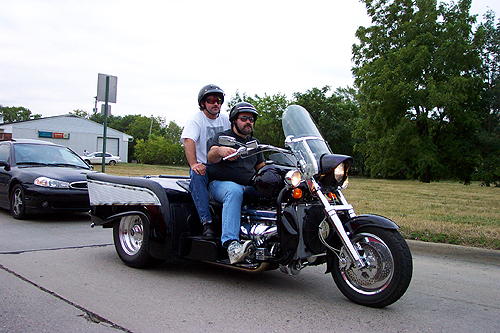 How about a 1957 Chevrolet motorcycle? 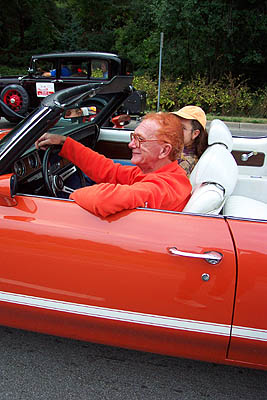 Or an early ‘70s Oldsmobile Cutlass convertible (someone will e-mail and tell us the correct model year) painted bright orange, with the owner’s hair dyed to match? How dedicated is that? (Old guys who buy silver cars don’t count...) 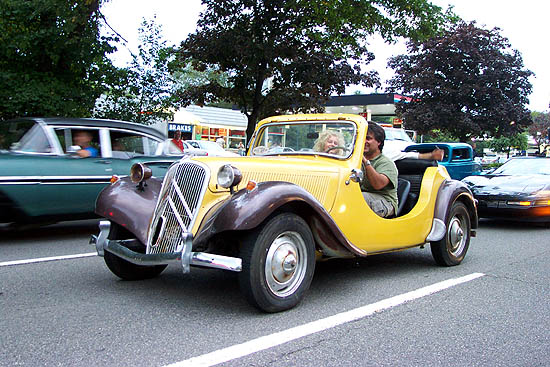 Or a 1955 Citroen Traction Avant cabriolet, custom-made at the factory for a Saudi prince? It was sounding a bit rough, but two weeks ago it wasn’t running at all. Current owner Arnold Leaf says it was formerly owned by ex-UAW president Douglas Fraser, which gives me a whole new respect for that man. But I’ll bet his rank-and-file wouldn’t appreciate him buying a car made by French scabs...

By the way: Janet, the lovely blonde in the car beside Arnold, asked if I was single. I told her I was that night. She laughed; Arnold drove away. The story of my life. 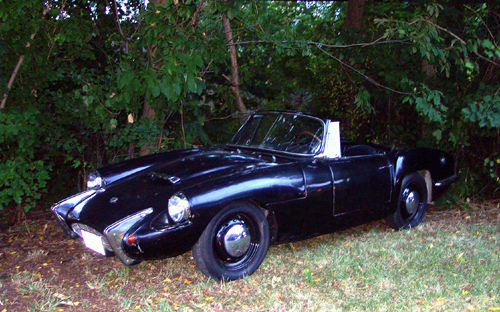 Arnold also owns that forlorn-looking black roadster, which is a 1962 Sabra, an Israeli-built car based on British Reliant mechanicals. Good bet that this was the rarest car on the street (more accurately, in the woods) this night. And this was only Friday...

Will corporate involvement ruin the Dream Cruise? This is an event that still has a real grass roots flavor, but increasingly, the event is dominated by carmakers’ displays.

General Motors has no fewer than four sites — Pontiac-GMC is in Pontiac (duh); Chevrolet is at the intersection of Old and New Woodward Avenues in Birmingham; GM Headquarters is at the Athens Coney Island, a couple of blocks south of 14 Mile Road; and GM Corporate has assumed responsibility for the show in Memorial Park on the northeast corner of 13 Mile Road, where Oldsmobile has stood in past years (no more PR budget for the doomed, all-over-but-the-rebates division). 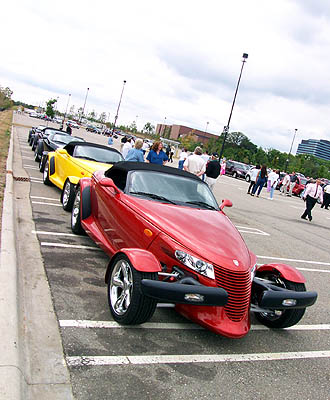 Ford has a big on-going party in downtown Birmingham. DaimlerChrysler rounded up over 400 customer PT Cruisers and about 40 Prowlers for a group session at their Technical Centre in Auburn Hills, then paraded across Featherstone and University for an impromptu pre-cruise down Woodward and back. But the bazillions of drivers stuck at the intersection of Featherstone and Auburn Hills when the cops closed the road down for half an hour to let this fleet pass by were not amused.

They all returned to the Walter P. Chrysler Museum at the Technical Center for a huge poodle-skirt party, with White Castle burgers, a Motown Tribute band, a rock ‘n’ roll/blues review, and an outdoor showing of American Graffiti. Dieter Zetsche, the new boss of DaimlerChrysler, looked a bit bewildered by it all - you can bet that club meetings of Mercedes-Benz SSK’s aren’t as much fun as this.

DaimlerChrysler also took the wraps of two new Cruiser variants - the Woodie, which is pretty much what you’d expect, tape appliqués of plastic wood on the body sides - and the “Dream Cruiser’‘, painted the same Inca Gold color of the latest Chrysler Prowler, with body-color bumpers and a handful of other special tweaks.

Both cars will go one sale - no formal notice has been given about the convertible Cruiser which was also on display, but you can place your bets now.

Apart from one pre-cruiser, observed by our own TCC Team on Tuesday night as saying he wouldn’t be back Saturday because it was “too commercial’‘, there doesn’t seem to be huge concerns among the cruisers that corporate involvement is an issue. There seems to be great loyalty to their manufactures, as I witnessed when I drove a Cruiser past the Pontiac display - we were roundly jeered.

And if corporate involvement convinces more out-of-town journalists to dump Pebble and come to Woodward, maybe the show will get bigger and better than ever.

But is that a good thing?

Already, the Cruise is a huge pain in the neck for anyone who doesn’t like old cars.

Maybe WE can ignore them, but the politicians won’t, not if they’re loud enough and angry enough.

And here were thousands of angry motorists who tried to actually get somewhere Friday night after 10, when the cops closed down Woodward a section at a time, to try and drive the revelers back home for the night.

Let’s hope that success doesn’t spoil the Cruise. In case it does, get down there RIGHT NOW if you’re in the Detroit area and it’s before five p.m. Saturday, August 18.

Failing that, make a date for next year.