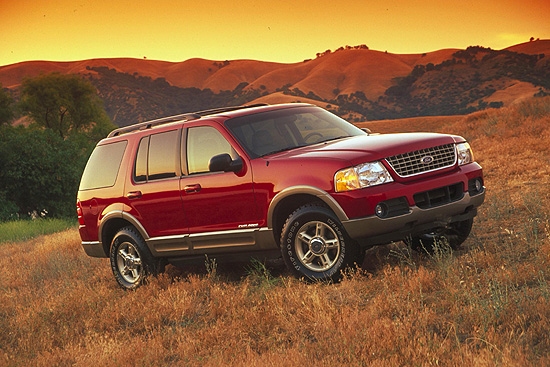 A redesigned Ford Explorer has received the top nod from Consumer Reports magazine, in effect changing the “beleaguered” label into “best” with its long-anticipated September issue. Up to this point, the Explorer’s future, at least in the mind of the motoring public, was somewhat uncertain, mostly due to a recall of some 6.5 million tires made by Bridgestone/Firestone and a wider recall by Ford itself. The residual effect seemed to have stalled the redesigned vehicle’s launch. Even so, the Explorer’s chief rivals have struggled as well. How key is the Explorer to Ford? The old model accounted for roughly one-third of company profits, according to Wall Street estimates.
Feds Launch New Explorer Study by Dan Carney (8/6/2001)
TCC's award-winning coverage of the Firestone recall

THIRD-ROW SEAT IN SUV COMING, GM SAYS
General Motors will add third-row seats in its midsize sport-utility vehicles, extending the SUV’s wheelbase and raising the roof in order to accommodate seven passengers. Gary Cowger, group vice president of GM manufacturing labor relations, said vehicles should be available sometime in 2002. GM had waited to put the third-row seating in because of concerns of passenger comfort. He said the extended wheelbase and higher roof solves the problem. He made the comments at the Management Briefing Seminars in Traverse City, Mich.

How do you say "long-in-the-tooth" in German? Not a moment too soon, Mercedes is rolling out a replacement for its long-lived SL roadster, and the automaker seems intent on making the fifth-generation model a true flagship. While the automaker has taken pains to honor the SL tradition (the familiar four-eyed headlights are still there), it's also done a complete technological update with drive-by-wire technology such as an electro-hydraulic braking system that reacts to driver's intentions by increasing brake line pressure (reducing braking distance by about three percent). Other features include a vario roof that changes the car from roadster to coupe in 16 seconds. Safety is also a key part of the new SL, with a litany of innovations including head-thorax airbags in the doors to protect against side impact. Still, for many potential customers, the bottom line appeal will be performance, and the 306-horsepower, 5.0-liter V-8 will send the high-tech SL soaring from 0-60 in 6.3 seconds.

GM GIVING UP TO $1500 ON ‘02s
In an effort to boost its U.S. sales of new model year 2002 cars and trucks, General Motors says it will offer incentives of up to $1500 per vehicle. Only the Chevrolet Tracker gets the largest amount, although incentives on Oldsmobile vehicles are in addition to a $1500 cash back for current owners of the soon-to-be-discontinued brand. GM’s overall sales, excluding Saab, are down 6.7 percent this year, but car sales are off about 11 percent in the seven months of 2001 compared with 2000.

GM’S NEW MATH MAY MAKE FUEL CELLS AFFORDABLE
GM says it intends to go into the stationary fuel cell business, using the “green” machines to provide power for home or office. The appeal might be strong for California businesses worried about power shortages, but making the case to the average consumer may be another matter entirely if the price isn’t right. Other stationary fuel cell suppliers such as ONSI Corp. and Plug Power are targeting a cost of $3,500-5,000 per kilowatt of generated electricity, a huge premium over conventionally generated power. GM officials are talking $350-500/kw, which would make fuel cell-generated electricity competitive with what comes out of the plug. That seems a huge leap considering the state of today’s fuel cell technology. How to meet this aggressive target? GM insiders hint some major manufacturing breakthroughs could be on the horizon. If they’re right, it could be a transformation on the order of the invention of the assembly line, which cut vehicle costs by at least an order of magnitude.
GM Driving Fuel Cells Home by TCC Team (8/7/2001)

WILL BALLARD’S FUEL CELL TAKE A BACK SEAT TO GASOLINE OPTION?
While it may be the week of the fuel cell, it isn’t necessarily a positive one for Ballard Power, the Vancouver-based pioneer in which Ford and DaimlerChrysler both have ownership interests. The reason? GM’s announcement that its stationary fuel cell concept, meant to ramp up technology (and bring in cash) before the automaker transfers the idea to its vehicles, will run on gasoline as well. Indeed, as Larry Burns, GM’s vice-president of research and development explained, “it allows us to use the existing infrastructure of filling stations around the country.” The GM announcement came as Ballard reported widening losses in its second quarter, partly due to a 70-percent increase in research and development spending. Ballard reported losses of $41 million on revenues of $20.7 million.

GM PUSHING FOR WEAKER AIR RULES?
Even in the wake of an industry victory over possible tightening of fuel economy standards, General Motors is reportedly getting ready to lobby for looser clean-air rules allowing wider use of diesel engines, possibly arguing the diesels will save fuel over gasoline engines in light trucks. The reports appeared in the Monday online editions of The Wall Street Journal. The newspaper said GM would be taking its pro-diesel campaign public as part of a report by the Diesel Technology Forum, a Virginia-based trade group made up mostly of makers of diesel engines and diesel-system components. Exxon Mobil Corp. is also a member. GM is the only automaker in the group.
Diesels: Clean, Green, Illegal? by Bengt Halvorson (4/30/2001)

HONEST: DEALERS ARE TRUSTED BY MOST CAR BUYERS
Most car buyers believe their selling dealer is honest and courteous, according to a study by J.D. Power and Associates. The 2001 Sales Satisfaction Study showed new vehicle buyers overall give their selling dealers an average rating of 8.5 out of a possible 10. The study also showed the power of a customer’s feet: more than one million shoppers each year decide not to buy a particular make of vehicle because they didn’t like the way they were treated by the dealer when they walked into the showroom.

CONSUMERS CHOOSE TO LEASE VEHICLES OVER LONGER TERMS
Continuing the trend that began in 1998, the average length of new vehicle leases increased to more than 39 months in the year 2000, according to a new study of the leading leasing industry association. In 1997, the average lease length was just over 32 months, according to the Association of Consumer Vehicle Lessors (ACVL). The association's members write four out of five consumer vehicle leases in the United States each year. "The day of the 24-month lease is virtually gone, and 48-month leases are the most popular term for most leasing companies," said Randall Brown, President of ACVL. Security deposits are also required less frequently than a few years ago, the ACVL survey showed. In 2000, security deposits were required on just over half of new leases written by ACVL members. ACVL has conducted the annual survey of its members since 1993.

NEW VEHICLE SHOPPERS TURN TO INTERNET IN INCREASING NUMBERS
According to a forecast from J.D. Power and Associates, approximately 58 percent of consumers in 2001 will use the Internet when shopping for a new vehicle. This is up from 54 percent in 2000 and 40 percent in 1999, according to the firm's New Autoshopper.com study. The primary reason new-vehicle shoppers go online is to find price-related information to help them in their negotiations at the dealership.

GRAND CHEROKEES MAY HAVE A PROBLEM STAYING PUT
A probe by the National Highway Traffic Safety Administration (NHTSA) may be shifting into higher gear after reports of problems related to the Grand Cherokee SUV allegedly lurching into reverse without warning. A number of incidents have been reported, the Los Angeles Times reported on Friday. The paper said DaimlerChrysler AG has entered into confidential settlements in at least four lawsuits. Three had involved injuries and a fourth, a death, the paper's report said. The NHTSA investigation was prompted by consumer complaints, not an alert from DaimlerChrysler, although the carmaker says it is fully cooperating with the investigation, the newspaper reported. The paper's report also said NHTSA has received 144 consumer complaints of "inadvertent rollaway in reverse" involving 1995-1999 Grand Cherokees, including an estimated 100 accidents and some 40 injuries.

QUIETER TIRES IN THE MAKING AS SCIENTISTS POINT TO SOURCE OF NOISE
Engineers have developed a new way of reducing tire noise, responsible for most of the nuisance sounds on the Interstate highways. Researchers at Purdue University in Lafayette, Ind., have developed a mathematical model to identify which parts of a tire produce the most noise, creating a visual representation that they liken to a fingerprint of each tire’s vibration pattern. Knowing what produces the noise may lead to designs to limit the highway noise factor.