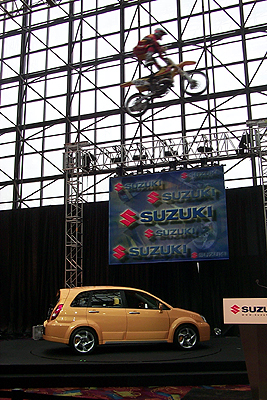 LEAP OF FAITH . Suzuki demonstrated to the New York auto show press that, if you want real fireworks, you have to use real fireworks. Suzuki motorcycle racing champ Travis Pastrana leaped over Suzuki’s newest concept, the SX activity vehicle, while his jump-off ramps went ablaze. Oh, the car itself, you ask? The SX is a supercharged four-cylinder, 220-hp, all-wheel drive wagon, sort of a bad-ass Pontiac Vibe. Suzuki’s very squarely aiming the SX concept at “active-lifestyle women,” but the screaming-yellow brake calipers told a different story. A production version of the SX is coming in the fall. 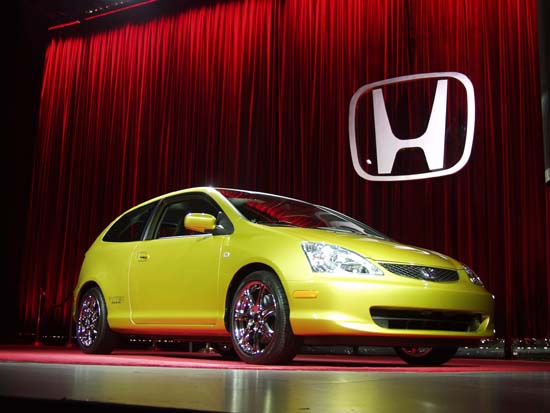 CIVIC LESSON. Honda’s not forgotten its most rabid fans. Even if it’s not called a CRX, the latest edition of the Honda Civic Si should be enough to appease the most discerning of zealots. The ’02 Si is a British-built Civic three-door with “European styling, hatchback utility, and SI performance,” according to Honda execs. Its 2.0-liter I-VTEC four-cylinder spins out 160 hp. Aside from the hatch styling – it’s now the only three-door Civic you can buy in the States --  you can also spot the Si by its mesh grille, sport seats, and silver-faced gauges. A nifty console-mounted gearshift is said to be inspired by rally racing. Honda is pegging 0-60 mph runs at 7.5 seconds, is predicting five-star safety ratings, and will make side airbags optional for the as-yet-unpriced Civic Si. 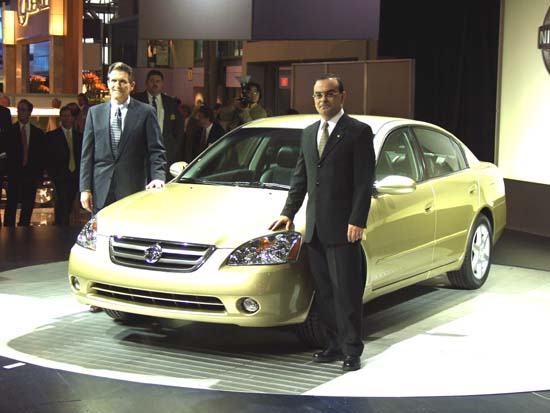 HALFWAY HOME . Nissan has already accomplished half of the goals it set out for itself under the revival plan it unveiled in October 1999. That according to Nissan’s Brazilian-born CEO, Carlos Ghosn. Ghosn and Nissan were honored by stock firm Morgan Stanley for having the biggest improvement in its stock last year, the automaker’s share price doubling since the Nissan Revival Plan was announced. During a subsequent appearance at the New York Auto Show, Ghosn stressed that Nissan is “not ready to cast off the image…as the underdog.” The worst danger, he warned, is developing “a sense of complacency.” 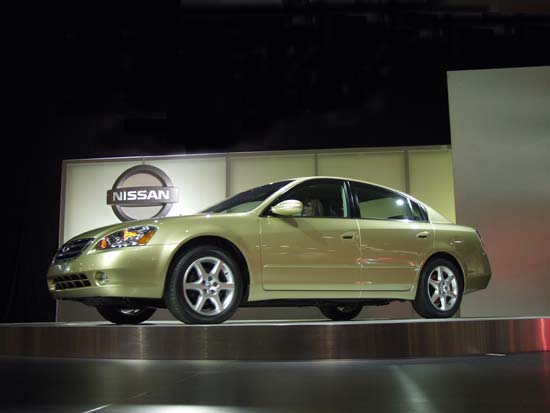 ’02 ALTIMA BOWS. Nissan has seen the light when it comes to true midsize sedans: the ’02 Altima is growing bigger and frankly, more interesting to look at. To build the attractive new Altima, Nissan grew the car’s wheelbase to 110.2 inches, and stretched it to 191.5 inches long. They say it’s bigger than the current Camry and Accord inside, and by pegging the Audi A4 and VW Passat as some handling benchmarks, have refashioned the anonymous compact into more of a driver’s car. Two engines will be available: a 180-hp four-cylinder and a 240-hp six-cylinder based on the current Maxima engine. A five-speed manual or a four-speed automatic can be had. Four-wheel disc brakes on all models and a V-6-equipped SE model with 215/55 rear tires tops the model range. We’ll have a full report on the new Altima later this summer. 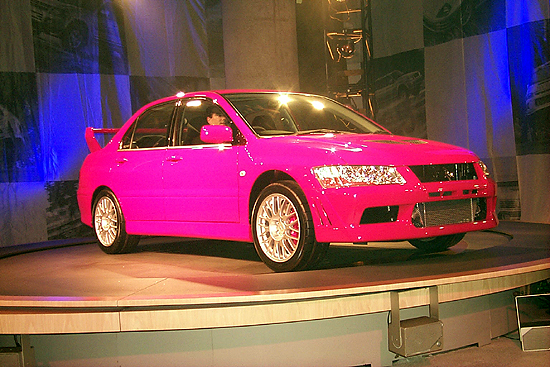 MITSU’S QUINTUPLETS. Not just one new product, but five from Mitsubishi at the New York Show. The Diamante gets a light restyling and a new VRX model with a rear wing; both the VRX and the standard car sport Mitsubishi’s new twin-grille nose styling. The bigger news, says Mitsubishi, is the company’s new Lancer sedan, a four-door economy sedan with a 2.0-liter four-cylinder engine. The base model is the ES, well equipped with air conditioning and a CD player; the LS gets a four-speed automatic transmission and keyless entry. The O-Z Rally edition gets special air dams, a black interior with white-faced gauges, and O-Z alloy wheels for a hot-rod look. 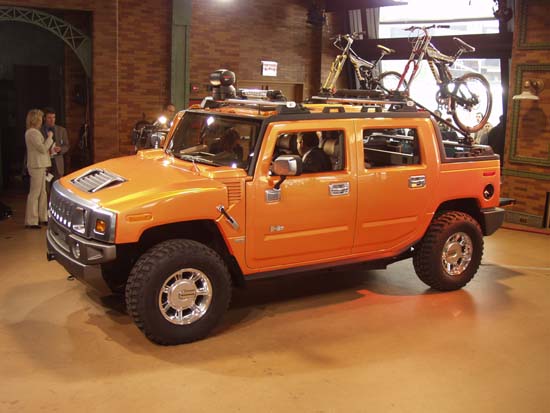 A REAL HUMMER? On the silver screen, Arnold Schwarzenegger has tackled all sorts of villains. But perhaps his most amazing accomplishment was stopping traffic in New York’s busy Times Square as he drove the prototype Hummer H2 SUT into the ABC TV Studios. An avid Hummer fan—he has owned five at various times—Schwarzenegger has been an unpaid advisor to the General Motors unit as its developed Hummer’s second model. “I feel I’m part of the Hummer family,” the Austrian superstar declared, “so I want to make sure the (H2) has the ballsy-ness and ruggedness of the original H1.” GM believes it can sell 40,000 of the new Sport-Utility Trucks a year when it hits dealers next year. Hummer officials insist the H2 will be notably more lavish and comfortable—without giving up its class-leading off-road capabilities. Efforts are already underway, sources confirmed, to develop an even smaller H3 model. Incidentally, while Schwarzenegger wasn’t paid for his NY appearance, GM did donate $13 million to the star’s favorite charity, the Inner-City Games. 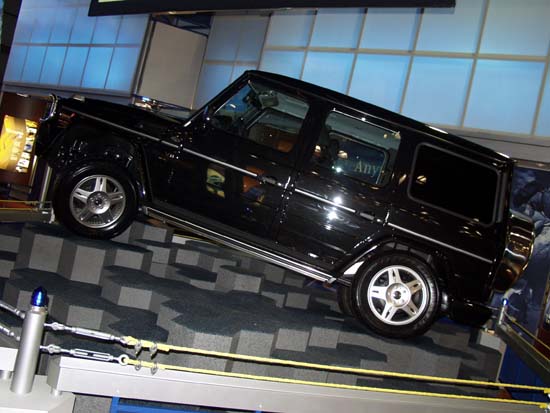 OH, “G”. The Mercedes-Benz Gelaendewagen, the German answer to the Hummer, will be making its long-delayed American debut. Renamed the G-Class for U.S., it will go up against a range of ultra-luxury sport-utes, such as the Lincoln Navigator and even the Hummer. Indeed, Mercedes’ U.S. marketing chief, Ken Enders, pointedly noted that Austrian native Schwarzenegger has “been seen” behind the wheel of a G-Class on more than a few occasions. “All we can say to Arnie is, ‘you’ll be back.’” (Mercedes used a video of its own star fan, musician Eric Clapton, to build enthusiasm for the NY roll-out.) Equipped with a 5.0-liter, 300 horsepower V-8, there will be no factory options for the loaded-up G-Class, other than choice of exterior and interior colors. Priced at $72,500, Mercedes is looking for a limited market of 1500 vehicles a year. 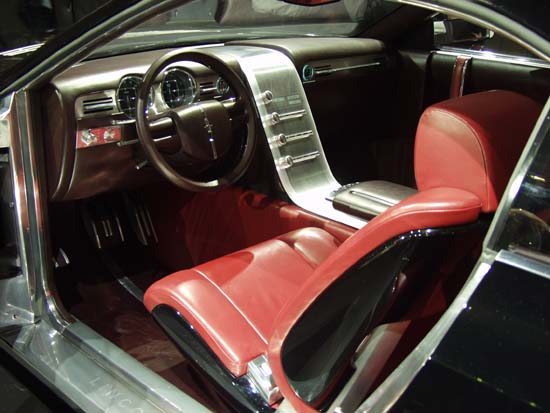 GERRY’S GAME. New Lincoln style guru Gerry McGovern says this MK9 coupe will presage Lincolns to come, even if the brand doesn’t build another massive two-door coupe that looks as if it could easily swallow a V-12 engine. Drawn from the heritage of Lincolns from the 1940s to 1960s, the MK9 shares some elements with the recent Ford Forty-Nine concept, including a cockpit split by a tall central tunnel, invisible rails for the front seats, chrome-accented door panels and clean, almost sparse sheetmetal detailing. While the greenhouse resembles nothing less than a Mercedes-Benz CL-Class, the Lincoln’s massive 22-inch wheels are as hot-rod as your uncle’s Continental.

MORE IN STORE? While the new Mk9 concept vehicle isn’t destined to reach Lincoln showrooms, insiders promise that it will spawn a series of spin-offs, some of which eventually might make it to market. While there seems to be little demand for high-end coupes these days, an alternative might borrow from the ’61 Lincoln and offer rear “suicide doors.” A well-placed Ford Motor Co. official also hinted that he’d favor development of a four-door convertible for Lincoln—a design theme that hasn’t been available in nearly half a century. Lincoln is also eyeing the growing market for high-performance luxury products, such as the BMW “M” cars and those built by Mercedes’ AMG subsidiary.

PRESS ON. What if they gave a recession and nobody came? Despite all the doom-and-gloom reports, car sales remain surprisingly strong, suggested Jim Press, during the annual International Motor Press Assoc. breakfast. Senior VP at Toyota, Press insisted the market will remain strong—unless the industry itself fails to deal “responsibly” with social challenges posed by the automobile. These include pollution and increasing congestion on the highways. “We have to take responsibility for our mobility,” he declared. Press added his belief that the fuel economy of the average automobile will increase by as much as 10 miles per gallon before the decade is out. 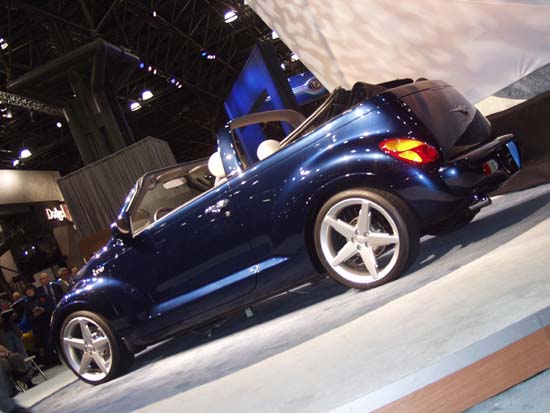 SUNNY SIDE UP. As the story goes, Chrysler public-relations staffers went to the art department just four months ago looking for a New York concept. The PT Convertible is what they got: a chop-topped, lowered PT Cruiser with a glass-windowed convertible top. Chrysler design chief Trevor Creed noted that of all the various alternatives shown to the Chrysler National Dealer Council, “this was their number one, hands-down choice,” and he hinted that as a result, the Cruiser Convertible could very well leapfrog other variants, such as the GT Cruiser. When could it reach market with this or some other variant? “In the 2003-2004 timeframe. It’s got to be in that timeframe to keep the excitement, keep the momentum going.” Both he and Jim Schroer willingly acknowledged that you need to have new variants during the lifecycle, or even a hot vehicle gets old and could die.

AFFORDABLE LUXURY. While automotive aficionados have already gotten a preview of Jaguar’s new X-Type sedan, the British automaker used the New York Auto Show to pull the wraps off its aggressive pricing strategy. The base model X-Type, with a 2.5-liter V-6 engine, will go for $29,950, while the 3.0-liter V-6-equipped model will start at $39,950. Executives from a number of competing carmakers were closely watching the preview, and one later conceded the X-Type could make a dent in his company’s own entry-luxury market share. Jaguar hopes to sell as many as 15,000 X-Types this year, due to its late introduction, with volume surging to 35,000 next year. The compact sports sedan segment is the fastest growing niche in the U.S. market, noted Jaguar’s U.S. chief, Michael O’Driscoll, now accounting for 40 percent of the overall luxury market. 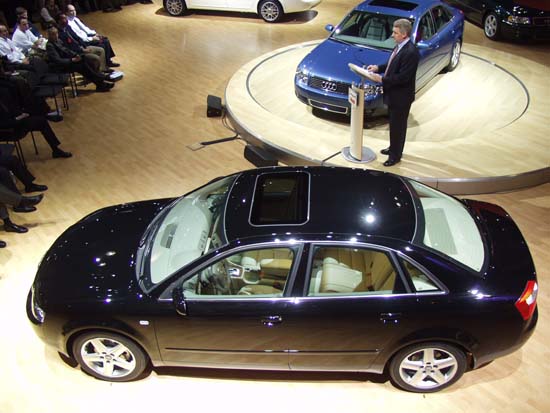 HOWDY, AUDI . Say hello to the new Audi A4. The sixth generation of the German marque’s own entry model will debut in October, and should prove a surprise to longtime fans. Audi’s U.S. President, Len Hunt, said the automaker put an emphasis on improving ride quality and increasing interior space. But the new A4 also introduces the first CVT, or Continuously Variable Transmission offered by a luxury automaker. A CVT eliminates conventional step gears, constantly running the engine at optimum speed. Audi officials insist it offers the fuel economy and performance of a manual, with the smoothness of an automatic. It will be mated, initially, to either a carryover, 170-horsepower 1.8-liter, turbocharged in-line four, or an all-new, 220-hp 3.0-liter V-6. (Buyers will have a choice of the “Multitronic” or a stick shift.) A CVT will be available only on the front-drive A4, though a version for the A4 Quattro is under development. Look for the CVT to become a mainstay for Audi, Hunt promised, largely replacing the marque’s conventional automatic transmissions. Audi also announced it will offer the OnStar system on all its 2002 models.