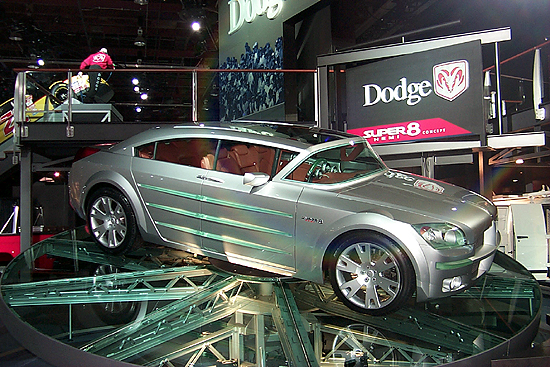 The Dodge Hemi Super8 is one of the concepts to come from what some
are calling "Detroit West" -- southern California.

A cold rain is falling, a stiff wind rattling the tent set up for the re-dedication of Ford Motor Co.’s ancient Rouge Complex in Dearborn, Mich. “Days like today, I wonder why my great-grandfather didn’t found San Diego,” sighs Ford Chairman William Clay Ford, Jr. Henry Ford the First didn’t stray far from the family farm when, in 1903, he set up the company that still bears his name. But these days, his great-grandson’s wish is starting to come true.

Nearly four years ago, Ford’s Lincoln-Mercury division moved, lock, stock and drawing board, to Irvine, California, a short drive south from Los Angeles. In the coming months, the automaker will transplant its other upscale divisions, Jaguar, Volvo, Land Rover and Aston Martin from East Coast to West. Collectively, Ford’s Premier Automotive Group will be housed in a new high rise going up not far from the U.S. headquarters of Ford’s Japanese affiliate, Mazda Motors.

Call it Detroit West, if you will. Southern California is fast becoming one of the nation’s automotive hubs. Asian auto manufacturers ranging from American Isuzu to Toyota currently employ perhaps 10,000 or more at their U.S. headquarters and regional offices. And Ford’s various brands alone should generate several thousand more jobs before the dust settles. To that, add thousands of additional jobs at local suppliers, independent auto design studios and support services, such as Lincoln-Mercury’s ad agency, Young & Rubicam, which moved auto operations west with its big-billing client.

“We’re at the point we’ve gotten on the radar screen” of everyone in the auto industry, said Paul Hiller, Managing Director, Destination Irvine, the economic development arm of the Irvine Chamber of Commerce.

Considering the dollars generated by the auto industry, there’s been a decades-long bidding war for automotive jobs all over the U.S. Southern states, like Alabama and Kentucky have been particularly aggressive seeking the semi-skilled jobs offered by new assembly lines.

“They’re not moving any factories out here,” noted Wallace Walrod, vice president of the Orange County Business Council. Land is too costly, and shipping too much trouble. So Southern California is successfully marketing itself as an automotive brain trust. “This is one of the top incubators of technology in the world,” emphasized Walrod. It’s also got a well-established design community centered around Pasadena’s Arts Center School of Design. But there’s a bottom-up car culture that can be seen everywhere from the streets of down-and-dirty South L.A., to tony Rodeo Boulevard in Beverly Hills.

To tap that energy, virtually every major carmaker—and more than a few minor ones—have posted some of their hippest and most creative design talent to Southern California. The Plymouth (now Chrysler) Prowler, a factory-built hot rod emerged from DaimlerChrysler’s Pacifica Design Center in Carlsbad, as did the quirky Dodge Super8 Hemi, a retro concept vehicle making the rounds on this year’s auto show circuit.

Volkswagen, meanwhile, found inspiration for the reborn Beetle in California. German automakers have enthusiastically embraced Southern California, not only as a design mecca, but a place to shed Teutonic tradition. “Stuttgart, (Germany, where DaimlerChrysler is headquartered), is a very small village. It was necessary for us to have a change and this was the place for us to go,” explained Karlheinz Bauer, who has spent three years in Irvine as director of the Mercedes-Benz advanced design studio. “From my perspective, I have more freedom (here).”

For Lincoln-Mercury, that was reason to move the entire company out West. Back in Detroit, “you’d look to the left and see a Chevy,” said LM President Mark Hutchins. “You’d look to the right and see a Taurus. You’d think it was a wonderful world but then you couldn’t figure out why your share was eroding in the rest of the country.” In Irvine, company employees have been greeted by a very different reality, a market in which imports are the norm, especially in the luxury segment. “You need to be out here and see all the BMWs and Mercedes to realize the world is changing.”

Insiders talk about “a different mindset,” and “a different energy level,” though it could be several more years before the effects of the move are readily apparent. But Hutchins suggested the 2002 Lincoln Blackwood, a high-end sedan/pickup/SUV crossover vehicle is “a product we wouldn’t have done before coming to California.”

That’s not to say automotive immigrants aren’t without complaint. Workers transferred from places like Detroit have experienced a different kind of sticker shock when faced with Southern California real estate prices. And even natives get restless in the region’s legendary traffic jams.

“No question, that’s a problem,” acknowledged Hiller, but there seems no sign that the automotive migration is going to ease off any time soon.