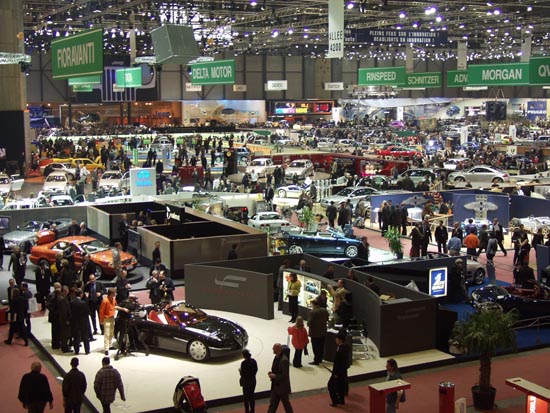 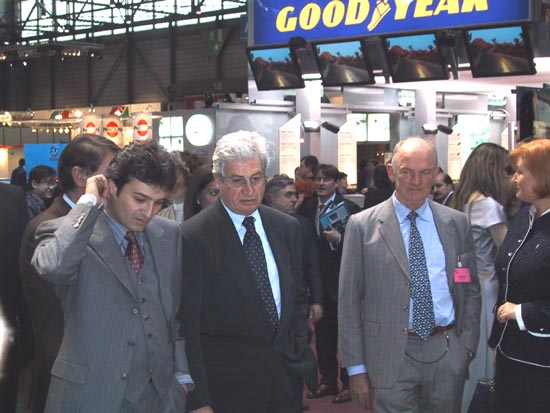 SWISS SHOW. With no auto industry of its own and a very healthy market, Switzerland is an important target for manufacturers across the world. Even U.S. brands not known for their exporting activities sell to wealthy Swiss customers, who like variety and quality in their car purchases. That makes the annual Geneva Auto Show one of the great events on the calendar not only for the salesman, but also for the top brass of the world’s manufacturers. In the country that has developed the art of neutrality to a fine art, industry bosses can take a look at what the opposition is up to, and they do. It’s no surprise to see executives on the competition stands here – in fact it’s almost expected that at some time during the press preview days, most of the industry bosses will stroll round the show to see what’s new—occasionally finding an opportunity to set in motion projects that could see light at some future Geneva show.  Could there be more than casual conversation in a meeting between VW boss Ferdinand Piech, and Italian designers Giorgetto Giugiaro and son Fabrizio?

FILO DOUGH. With no show in Turin this year, the Italian designers have taken the opportunity of the show closest to their home territory to show off concepts such as the Bertone Filo--the Italian word for wire. The thinking behind the name is that the car is a showcase for the next step in automotive technology, the adaptation of aircraft-style ‘fly-by-wire’ technology to the automotive scene. Built in collaboration with SKF, the engineering company, Filo’s brakes, throttle and steering are controlled by means of electronics rather than a mechanical linkage.The traditional steering-wheel is replaced with an aircraft-type yoke connected not to a traditional steering column, but as an extension of the front seat arm-rest that curves round in front of the driver. 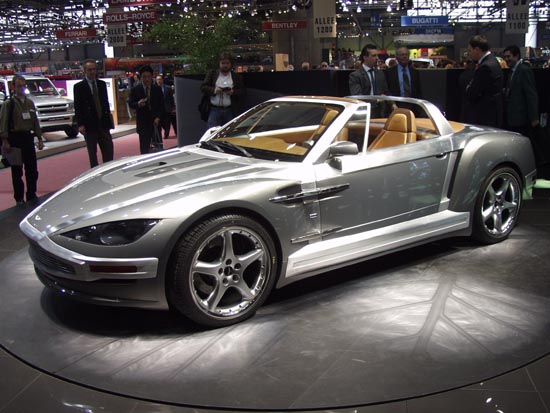 PERFECT VISION? Will we be seeing Twenty-Twenty in the near future. Certainly, that’s the hope of ItalDesign, the Turin styling house that grew from the design genius of Giorgetto Giugiaro, Working on the base of an Aston Martin DB7 Vantage, Giugiaro and his son, Fabrizio, have created a smooth convertible that looks true to the roots and traditions of Aston Martin, but which utilises an innovative construction system, with a visible aluminum framework that supports the body panels. Aston Martin collaborated by supplying components for the car, but the company insists that this is not a lead to how a DB7 replacement might look. Giugiaro also showed an unusual 4x4 concept. It’s based on a design exercise that was shown at the Turin show last year, but it has been modified in line with one of the oldest traditions of the coachbuilders’ art, that of the custom-built vehicle. The customer in this case is famous photographer Helmut Newton, who has created a calendar for Italdesign in his own inimitable style.

AVANTE FIORAVANTI. Less well-known internationally, but destined to join the top design ranks is Leonardo Fioravanti, who cut his teeth in the Pininfarina studios. Now he has his own company, and his stand at Geneva shows a car that could be unexpectedly mainstream. It’s a two-seater sports car based on an Alfa Romeo platform, and named the Vola. Clean and elegant, it features an unusual hardtop, that pivots forward from its position atop the trunklid.

LUXURY SHINES. In terms of production cars, it was the luxury segment that was in Geneva’s spotlight. Italy’s Lancia showed its Thesis sedan, that will go up against the big luxury newcomer at the show, Jaguar’s X-Type. Thesis was shown as a 2002 model, but it has some elegant touches that will appeal to more traditional customers, who are Lancia’s specialty. 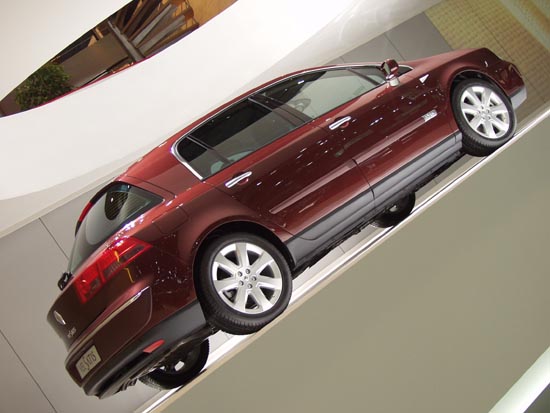 Another 2002 luxury model unveiled at the show was Renault’s Vel Satis, a car indicative of the stance the French industry giant is taking – of being the alternative, the car for those who want something that isn’t like all the others. Vel Satis has styling that that is totally original, and that’s what will make it sell, according to company bosses. “A top-end sedan doesn’t have to be German” is Renault’s credo, and the Vel Satis, together with the Avantime GT car that will go on sale this fall certainly underline that philosophy.

FRENCH FEAST. Peugeot has a knack for creating stylish small and medium-size sedans that ride as well as they look, and the 307 is bound to be another sales success for the company. Bear in mind that the market segment at which the 307 is aimed accounts for about a third of the European market and you’ll see why Peugeot is doing very nicely, thank-you.

Even with a brand new model to show, Peugeot still felt the need to put a concept car on the stand. Called the Camelio, it is a kind of cross between a European-style mini MPV and a pickup. Since the French company started by building bicycles and is still one of Europe’s largest bike manufacturers, the Camelia’s rear bed carries a couple of Peugeot brand mountain bikes. 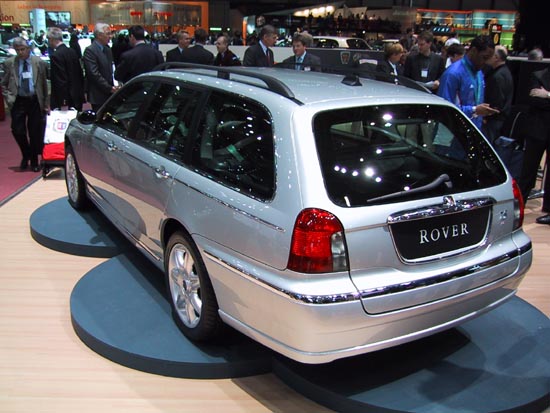 WAGONS, OH? There’s a feeling in the industry that the station wagon is about to make a comeback, and if that’s true, MG Rover have made a timely move by introducing a wagon version of their 75 sedan. The 75 came out at the same time as the Jaguar S-Type, and suffered by being compared with the more expensive and more powerful car from Coventry. The 75 then got involved in the whole BMW/Rover mess, but now that MG Rover is back on an even keel and making some progress, the 75 is improving its reputation. The automaker hopes the wagon will increase its appeal by adding load space to the elegant sedan shape. There’s even a more powerful MG version, but it’s not been decided whether the concept will be put into production. 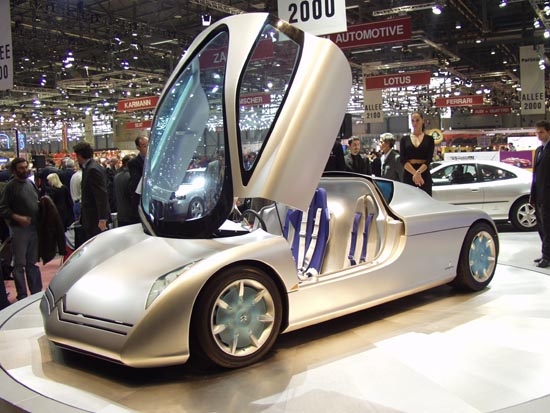 OPEN SESAME. There should be no trouble getting into the gaping clamshell of the Citroen Concept created by Sergio Pininfarina. Dubbed the Osee, it’s the latest in a series of prototypes the designer has brought to Geneva over the years. In contrast to so many of the show’s prototypes, the Osee is an unusual, mid-engine three-seater. Despite its supercar ambitions, Pininfarina aims for it to maintain the proven Citroen qualities. According to André Pininfarina, the third generation of the family to play a part in the company’s management, the suspension “allows non-aggressive performance similar to a magic carpet.” 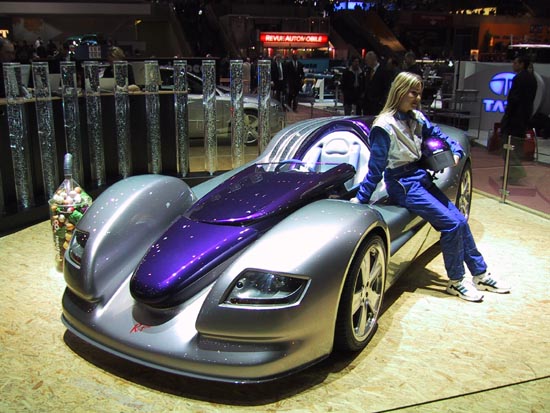 SWISS CHEESE. Switzerland hasn’t had a car industry since the 1920s, but each year Geneva showcases for a couple of local companies who always concoct something to grab attention. Franco Sbarro is an expatriate Italian who has become a part of Swiss motoring lore with an assortment of oddball designs. The oft-taciturn German-Swiss also have their wild side, expressed in automotive terms by Rinspeed. This tuning specialist builds flights of fantasy that it could, if you were crazy enough and rich enough, build for you. This year’s offering is a single-seater with claims to a green ecological side symbolised on the show stand by a racing fuel filler crammed with fruit and vegetables. 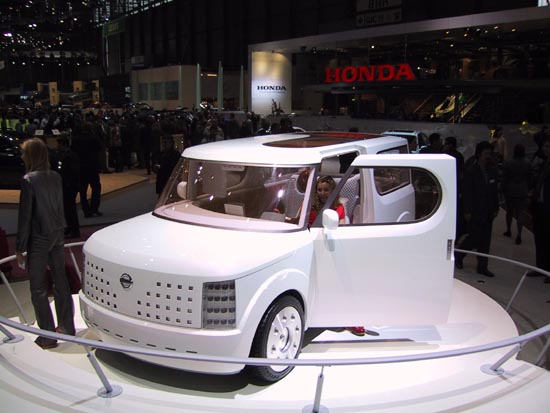 Even the major manufacturers are not immune to a little Geneva craziness. Nissan showed a cube-shaped city car whose blunt nose was totally devoid of anything remotely resembling a grille. All it had was a pattern of simple holes that in these surroundings reminded you more than anything else of a Swiss cheese.

What do you think of the Geneva show? Tell us by clicking into the TCC Message Boards!