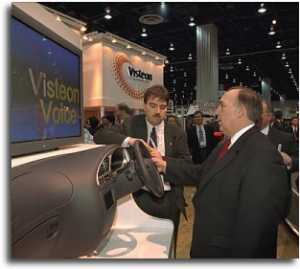 DETROIT — Suppliers from all over the world are promising to show off a dazzling array of new technology during the annual Society of Automotive Engineers (SAE) Congress & Exposition, which is expected to attract as many as 1300 different exhibitors this year.

Much of the technical discussions will revolve around the tasks facing the auto industry's engineering community, which include cleaning up emissions and curbing the release of greenhouse gases, along with finding ways to make vehicles lighter and easier to build and service.

Telematics — the ability of the vehicle to communicate with other vehicles or services out side the vehicle — also has emerged as a major topic for discussion for this year's meeting.

Other important topics that will be dissected during this year's meeting include fuel cells, vehicle recycling and new advances in lighting. In addition, there also will be the now perennial discussions on vehicle safety and airbags. Another topic that will be discussed will be a sophisticated, sensor-driven "Integrated Safety System" that if a vehicle crashes, will call "911," determine whether the driver and passenger are conscious, detect and suppress post-crash fires and even unlock seat belts and doors.

Overall, the SAE event is expected to attract more than 49,000 visitors to Detroit's Cobo Hall, more than 15 percent of them from connected to auto industries in Europe and Asia, which has steadily increased their presence at the show over the past decade. In fact, official "host" for the 2000 Congress & Exposition is the German automaker BMW.

Tom Purves, chairman of the BMW Group in the U.S. who recently visited Detroit, to talk up this year's show this year's exposition will once again show skill and depth of the industry's engineering community.

Over the years, the SAE show has offered suppliers a chance to show new technology that will reach automotive consumers in the next couple of years. This year is no exception as most of the industry's top suppliers have prepared major displays. Suppliers tend to withhold technology still under development but are pretty open about technology that is ready to emerge from their workshops.

Siemens, for example, plans to show off a concept car, dubbed the Spirit, that includes several advanced technologies the company's engineers and executive believes will help make driving more comfortable, more convenient and safer in the future. The multimedia systems on the Spirit alone offer drivers the choice of AM/FM radio, CD, DVD with video monitors a videophone, Internet access and e-mail as well as concierge service. It also comes with fingerprint and video recognition technology that makes it virtually impossible to steal. ZF Industries, meanwhile, plans to offer what the company is billing as the auto industry's first six-speed, automatic transmission.

Delphi, meanwhile, has a new system that it describes as flat-wire technology that helps reduce the space needed for the wires and connectors needed to support the new electronic systems now being assembled for vehicles. Vehicle system can use the lower profile and reduced component count to refine their designs and offer new creative ways of packaging special features, noted David Siegfried, the supervisor of the Delphi project. The new system is also easier to assemble and more reliable.

Denso, the big Japanese supplier, is planning to showcase some of its new electronically-based infotainment systems. In the past 10 years, spending on vehicle electronics has gone from $10 billion to $80 billion and the figure is expected to keep climbing in the future, according to one estimate prepared for the show.

Robert Bosch gmbh, meanwhile, is planning to show off a new communications device that can help warn cars around it of hazards a couple of kilometers up the road.

Adaptive cruise control, which automatically slows a vehicle if the traffic in front of it begins to slow, also has been under development for several years and TRW is showing off a new system this year. The TRW system uses radar to automatically adjust the vehicle's speed and keep a safe following distance between vehicles. The system is compact and can be integrated into existing platforms, TRW officials said. TRW also is showing off a windshield wiper system that will automatically turn the wiper on or off depending on the amount of moisture on the windshield

Large companies have not developed all of the technology on display, however.

ALIRT, a small Canadian company, is bringing to SAE this year a battery-powered TV camera that is mounted on the side view mirror and offers a comprehensive look at the left-lane blind spot. The system also will trigger an automatic alarm if the driver enters the danger zone.