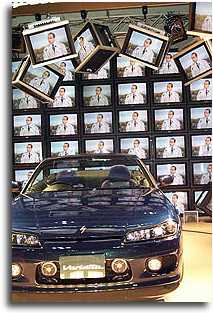 The halls at Makuhari Messe are nearly as crowded as a Tokyo subway car this week, now that the doors have opened on Japan’s biennial auto show.

The Tokyo Motor Show is one of the automotive world’s biggest events, with more than 1.5 million people expected to make the trek out to the suburban exhibition center where hundreds of vehicles are serving to showcase Japanese automotive prowess. This year’s exhibit includes more than 35 new production cars and concept vehicles, products that offer a glimpse not only at what’s coming next year but what may well be on the road in 2005.

As in past years, Japan’s automakers are putting a high emphasis on the environment. There are plenty of pint-sized sedans and coupes, like the Daihatsu Micros-3l, which sips only 3 liters of fuel per 100 kilometers (about 79 miles per gallon).

But new technology promises to let Japanese motorists boost mileage and protect the environment without having to squeeze into the automotive equivalent of a shoebox. Toyota introduced the first gasoline/electric hybrid, the Prius, nearly two years ago, and the prototype HV-M4 suggests the automaker is ready to roll out a second-generation hybrid in minivan form. Nissan will fight back with the Tino Hybrid, due to roll into dealerships next year. Tino combines an electric motor and a gasoline engine under the hood, then mates the pair to a sophisticated Continuously Variable Transmission.

Officially, Suzuki’s EV-Sport is being billed as an electric vehicle, but let the batteries run down, and you can still get home, thanks to a small, gasoline-powered "emergency engine."

Though Honda is working on a variety of ultraclean alternative powertrains — such as a virtually pollution-free fuel cell — it’s betting there’s a future for the internal-combustion engine. "By 2005, Honda aims to replace its current engine lineup with a line of clean, fuel-efficient engines," declared the automaker’s diminutive CEO, Hiroyuki Yoshino.

What Honda’s Fuya-Jo says about the future is a little harder to determine. It bears an uncanny resemblance to a phone booth on wheels.

"Be smart, have fun," declares the sign over the Honda display. And indeed, the Fuya-Jo is just one of a variety of wild and wacky vehicles scattered across the Makuhari show floor. The boxy Daihatsu Naked underscores the trend towards sport-ute-like designs, even among vehicles designed primarily for use on city streets. This so-called "urban assault vehicle" could double as an oversized picnic basket, with a foldout table and all sorts of other creature comforts built into its body and interior.

A somber occasion at Nissan

Despite the seemingly ubiquitous exhortations to "smile" and "have fun" pasted all over the walls and booths of Makuhari Messe, there’s a serious, even somber note underlying the biennial auto show. And for good reason, when you consider the dire situation facing Japan’s automakers. In 1998, Japanese new-car sales plunged to 4.3 million, barely half the record levels set during the country’s "bubble" economy. And the numbers continue to slip this year, meaning volume is all but certain to hit a 12-year low.

As crowded as the motor show is this year, even the attendance figures reflect the industry’s problems. Attendance is expected to dip by 25 percent compared to the 2 million visitors who turned out for the 1991 Tokyo Motor Show.

Though industry balance sheets, on the whole, aren’t nearly as bleak as they were two years ago, several of the nation’s nine automakers continue struggling for survival. The Tino Hybrid was one of a half-dozen vehicles Nissan rolled out during its motor show press preview, but few in the audience seemed to notice. Just two days before motor show press days, the automaker announced the industry’s most austere cutbacks since World War II.

Nissan will close three assembly and two powertrain plants, cut 21,000 jobs, and drop half of its outside suppliers as part of the so-called "Nissan Revival Plan. "

There will be "no sacred cows, no taboos, no constraints," asserted the automaker’s stern COO, Carlos Ghosn, who helped save the French carmaker Renault from similar problems in the mid-1980s. Renault acquired a controlling stake in Nissan last April, then sent the Brazilian executive scurrying off to Tokyo.

Nissan attempted to use its press slot to paint a prettier picture for itself, rolling out an array of new concept and production vehicles. But for most of the media, Ghosn was the story of the day. And while a procession of products rolled across the stage, most of the cameras were focused on the stern COO.

Trouble for the rest

While Nissan is clearly the most troubled of Japan’s automakers, it is by no means the only one in serious trouble. This year’s motor show is "like an iceberg," suggests Jay Ferron, head of the automotive practice for PriceWaterhouseCoopers. "Ninety percent of the story here is hidden below the water."

The hot topic this year was not new product but which of Japan’s automakers will survive the long-anticipated industry shake-out, and in what form. "We are still looking at all possibilities," Mitsubishi Motors President Katsuhiko Kawasoe told reporters. "If a tie-up will help to strengthen our business, it's one option."

Subaru officials were a little more coy about their own future, though General Motors Corp. Chairman Jack Smith acknowledged having met with the Japanese company to discuss possible ties. Industry insiders believe Subaru would like to form a joint venture to leverage the use of its four-wheel-drive technology. But other sources say they wouldn’t be surprised to see Subaru’s parent, Fuji Heavy Industries, sell at least a small share in the company.

Beyond the emphasis on environmentally friendly technology, there seemed to be few strong themes to this year’s Tokyo Motor Show, said analyst Jim Hall of AutoPacific Inc. "You walk around from stand to stand and few (automakers) have any direction." The exception, he added, is Toyota, "which has decided to make cars for young people." "Everyone else is trying to follow Toyota," the only automaker showing any real strength in the Japanese market.

Foreign manufacturers clearly see an advantage in the current Japanese crisis. A few, including Mercedes-Benz and Peugeot, have managed to increase their volume despite the weak market. Others, including General Motors and Ford, are hoping to find new ways to connect with Japanese consumers, despite recent declines in overall import sales.

Shortly before the motor show opened, GM announced it would partner would Suzuki to produce a new "Asian car," and it showed several prototypes, including the stylish Triax, which could eventually be produced by one of its Asian affiliates.

For its part, Ford took the wraps off what might be the most controversial concept car at Makuhari Messe this year. It’s hard to say whether the bright orange 021C is a retro design or something more futuristic. It was pulled together by Marc Newson, a London designer best known for his works ranging from pop bottles to aircraft interiors.

"I set out to design a car I hoped wouldn’t intimidate young people," Newson explained. "I’d like to think it represents the future."

Clearly, those are the buyers Japanese automakers need to reach if they hope to bring some life back to their home market. But with the continuing problems in the Japanese economy, it seems like potential customers, young and old, are wary about buying right now.