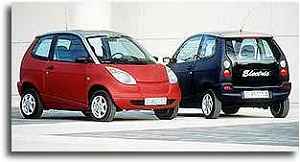 With European sales running at record levels, Earl Hesterberg’s job should be easy. So why is he worried?

Hesterberg, sales chief for Ford Motor Co.’s European operations, surveyed the floor of the Frankfurt Motor Show, waiting for the rush of almost 1 million people who will flood the sprawling exposition complex before it wraps up on Sept. 26th. The event is Europe’s biggest car show, and this year, it will serve as the background for 51 global introductions, 50 percent more than two years ago, at the last show. Ford itself took over Halle 5, filling it with its wide array of brands and products, from the tiny TH!NK electric vehicle to luxurious Jaguar sedans.

As in any market, the Frankfurt show serves as a catalyst, helping motivate motorists to go back to their dealers and place orders. That could help keep the momentum going in a year that is already running at record levels. Through July, Western European sales were up 8%, to 8.11 million, reflecting a mix of economic growth, rising consumer confidence — and an increasing competitive auto industry.

"This is the toughest car market in the world," said Hesterberg, who has served several stints in both Europe and the United States. "You have a proliferation of product…even as prices across Europe are dropping. It puts tremendous pressure on profitability."

New car prices across the continent have fallen about 2.5 percent this year, estimates Greg Melich, an automotive analyst with the Morgan-Stanley UK Group. In Italy, the decline has been even higher, as much as 8 percent, he adds.

In Great Britain, where costs have fallen an average 4% this year, rumors began circulating several weeks ago that Ford would launch an across-the-board price cut this Fall. Wary consumers suddenly decided to wait, choking off what was traditionally the U.K. market’s biggest month. Ford was forced to rush out with ads declaring it had no plans to cut prices—but if it did, it promised to rebate the difference to those who’d already bought its products.

Even without a major price cut, Ford is struggling to reverse years of losses, and doesn’t expect to have its European operations back in the black for at least two more years, Hesterberg conceded. But the situation isn’t much better for the continent’s other major players.

"Of the top eight companies, only two managed to grow their margins during the first half," says analyst Melich. If anything, he adds, "there’s margin deterioration. I think we’re going to have continued strong demand, but I don’t think we can expect margins to pick up any time soon."

The happy side for consumers

For consumers, of course, the outlook is a lot brighter. Manufacturers are racing new product to market at a faster-than-ever pace. And the new models are far more lavishly equipped than ever before. In its bid to regain its long-held position as Europe’s leading automaker, General Motors’ Opel brand has begun loading its vehicle with standard features, like power windows and air conditioning, that previously were offered only as high-price options.

These trends echo "what has been going on in the U.S." says GM’s European chief, Michael Burns. So is the push to give buyers products that more closely reflect their lifestyles and needs.

In contrast to America, where the design mantra is "bigger is better," Europeans must cope with chronic highway congestion and fuel prices that can top $5 a gallon in some markets. Here, the watchwords are "smaller" and "more fuel efficient." With the recent introduction of its 3-liter Lupo, Volkswagen became the first carmaker to hit an industry-wide goal of delivering cars that get about 75 miles per gallon. VW showed off another so-called 3-liter car (because they use less than three liters of fuel per100 km) at Frankfurt, as did Opel.

Traditionally, cars like the Lupo required motorists to make plenty of sacrifices in terms of comfort and roominess. But like their American counterparts, European drivers aren’t in the mood for sacrifice, even if their vehicles are getting smaller and smaller.

Renault has built a reputation for creative design with products like the Megane and Scenic—an updated version of which appears in Frankfurt. Call them micro-minivans. They’re far shorter than American minivan designs, but they’re much taller than traditional European automobiles, with concurrently taller seating. In the trade, this is known as having a high "h," or hip point. Moving up instead of out translates into roomier and more comfortable seating.

With the world premier of its Avantime, Renault continues this trend. But there are plenty of others following close behind, including Citroen, with its Picasso, and Toyota, with its Yaris Verso. Toyota is hoping the Verso and a sedan version of Yaris will help it finally crack continental resistance to automobiles Asian.

DaimlerChrysler, meanwhile, wants to open the market to the U.S.-based Chrysler brand, and the Java concept vehicle suggests it may be on the right track. It’s another tall car, and even though it’s a yard shorter, nose-to-tail, than the Dodge Neon, Java has no space for passengers. Officially, it’s a concept car, but "We have a habit of putting our concepts into production," hints DaimlerChrysler co-Chairman Bob Eaton.

The emphasis on fuel economy underscores Europe’s increasing interest in "green" automobiles. European makers are under pressure not only to save fuel, but further reduce emissions. Mitsubishi was one of several brands to unveil clean and highly efficient diesel and gasoline engines. Audi took a different route. Its A8 was the world’s first aluminum-bodied production sedan. The A2 brings the lightweight material down into the price range of the average consumer. The A2’s body is 40% lighter than if it were made from steel, while its overall weight is 330 pounds less than comparable vehicles in its class.

While the bulk of the European market is moving into smaller, lighter, and more fuel-efficient cars and trucks, there’s still plenty of interest in exotic and high-performance vehicles. Intent on competing with his more upscale German competitors, Volkswagen Chairman Ferdinand Piech went on a buying spree last year, snapping up such high-end marques as Bugatti and Bentley. At this year’s Frankfurt show, VW is taking the wraps off the new Chiron, a sleek super-coupe powered by an unusual W-18 engine, its pistons arranged in a "W" pattern, rather than the conventional "V."

But the big news about VW’s upmarket move is the Concept D, a prototype of a new, large car likely to hit market in 2000. It’s been called "Passat-Plus" by some, since it’s a step larger than VW’s current top-line model. But others have dubbed it the S-Class-Killer, a reference to Piech’s stated goal of challenging his arch-rival, Mercedes-Benz.

"There are a lot of people inside the company who aren’t quite convinced about this strategy," acknowledged one Volkswagen executive, asking for anonymity. Indeed, Ford pulled out of the segment Concept D is targeting. European buyers equate large with luxury, and if they buy big, they want a premium nameplate, like Mercedes or BMW, rather than amore mundane, mass-market nameplate.

Of course, if VW can move up, Mercedes’ parent company, DaimlerChrysler, is willing to try moving down-market. Its miniscule SMART car, barely 10-feet long, bumper-to-bumper, went on sale last fall, after a six month delay to correct a potential rollover problem. Initial sales were dreadful, but the numbers are picking up and could reach 80,000 for the year, compared with an original projection of 120,000.

Despite the unexpected departure of SMART’s chief executive, DaimlerChrysler executives insist they are committed to their newest brand. And Frankfurt saw the debut of two new models of the minuscule two-seater, including a Cabrio and a diesel. SMART also pulled the wraps off a slightly longer roadster concept that may soon make it into production.

The Frankfurt exposition center runs nearly a kilometer from one end to the other, sprawling into more than a dozen different exhibition halls. Considering the booming market, attendance is expected to be up considerably. And those who make the show are likely to be kept entertained, as well as informed. Several of the makers reportedly have spent more than $10 million apiece, filling their booths with multimedia display and live presentations.

It’s all part of the battle for the hearts, minds and pocketbooks of European consumers.