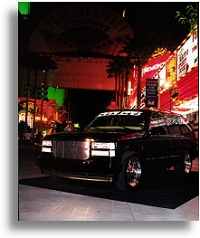 Just as you think of a 10,000 horsepower, nitro-burning Top Fuel dragster sitting at the starting line, milliseconds from thundering down the quarter mile — that’s how the organizers see the annual SEMA Show.

The automotive aftermarket's annual extravaganza, held the first week in November in Las Vegas, is now second in size only to Comdex, the computer industry's trade show. But what caused the explosive, exponential growth of the aftermarket's showcase event, and who can be found there displaying their wares?

In the beginning, SEMA (short for Specialty Equipment Market Association) was little more than a small band of mainly Southern California-based manufacturers of speed equipment, gathered together in the ballroom of the Disneyland Hotel. From its modest beginnings, the SEMA Show has grown to encompass every square foot of the mammoth Las Vegas Hilton Convention Center, with all conceivable forms of specialty automotive parts and accessories being shown, from esoteric body kits for import performance cars, to superchargers and intake manifolds for race cars, to restoration parts for muscle car classics.

In short, SEMA has it all in a one-stop shopping trip, and buyers have made it a "must see" event. For some jobbers and warehouse distributors, is the only trade show they'll attend all year.

But what makes the SEMA Show a standout from all the rest, in an industry proliferated by trade events? Charlie Van Cleve, current SEMA Chairperson of the Board and vice president of sales for Hedman Manufacturing says, "Let's not forget it's the exhibitors, the manufacturers and their personnel who are responsible for the fabulous presentations of outstanding vehicles of all types — cars, trucks, SUVs and racing equipment — as well as the exceptional displays. All combined these elements generate the very excitement for which our show has become so well known and admired."

OEM participation has also grown, from performance parts operations involvement a decade ago, to full-scale, auto show-sized exhibits filled with the latest in concept and show vehicles, staffed by high-level marketing and engineering personnel, and all the accoutrements that accompany their inclusion, from sponsored luncheons and dinners, special measuring sessions where aftermarket manufacturers can get a look at new models that will soon debut, to roll-outs of concept and show cars that will hit the auto show circuit soon after their turn in Las Vegas.

Clearly, from the OE manufacturers standpoint, SEMA is an overgrown focus group, where they can see firsthand if their idea of 'cool' matches that of the hyper-enthusiasts in attendance.

What's it cost to attend? If you're a part of the auto industry, the admission fee is nominal. However, if you're an exhibitor, prepare to have to draw for your space at a lottery determined by seniority in the show, and then be ready to pay not only for not only the use of the Convention Center's real estate, but for the booth itself, cartage for the goods you wish to display, unloading and loading by the unionized workers, and the costs associated with having a sales force on the floor for the entire four-day run.

As costly as it is, and there are few aftermarket companies that don't voice their opinions in this regard, the Show is a sellout each year. Our advice: have a game plan going in, see only those vendors for which you have a genuine interest and/or an appointment, and don't get sidetracked until later in the week, when the aisles are less crowded, and you have time to look at a more leisurely pace.

After all, it is Las Vegas, and as they say, "It's Showtime!"