Dakota 'Boys' Dress Down
Live from the Grand Ol' Opry...
My, My, Mercury
Evoq, More Than Just a 'Future Car'
Cadillac Drops to No. 2
Quacking Caddy Ad Cracks Up
The Return of the Z-Car
You're Such a SUT

DAKOTA 'BOYS' DRESS DOWN - Wearing workshirts and blue jeans, James Holden (Executive v.p, sales & marketing) and Tom Stallkamp (President, Chrysler Cars & Trucks) did a stand-up routine along the lines of Tim Allen's Tooltime TV spot to introduce the 2000 Dodge Dakota Quad Cab. Though the comedy fell flat - Holden and Stalllkamp were quickly told to "wrap it up" by the PR guys - the Quad Cab's combination of power, interior room, and cargo capacity made a favorable impression on its own. The new truck has four full-size, front-hinged doors and offers legitimate seating for six people. In order to keep overall length within the bounds of, say, a Greyhound bus, the cargo box is 5-feet 3-inch long and nearly square. While the small box precludes the conveyance of 4x8 plywood sheets, the 1,450-pound payload capacity is said to be peerless in the compact domestic pickup market, thanks in part to Dakota's available 4.7- and 5.9-liter V-8s. Production at the Warren, Mich. facility is said to reach 70,000 units in the first year, no doubt drawing buyers away from SUVs and conventional crew cab pickups. In fact, said Holden, Dodge's Club Cab could be dropped from the lineup. Pricing for the Quad Cab has not yet been set.

LIVE FROM THE GRAND OL' OPRY, IT'S' No, not the Blackwood Brothers'the Lincoln Blackwood! Ford's Lincoln-Mercury Division. Displaying at its second major auto show since relocating from Detroit to Irvine, California last spring, Lincoln-Mercury marketing boss Jim Rogers and Ford Motor Company design vice-president J Mays introduced the assembled media to the Lincoln Blackwood. The burly looking Blackwood is a four-door, four-passenger combination SUV/pickup truck concept, which is one-third truck bed and two-thirds Lincoln Navigator. It uses a two-wheel-drive drivetrain, and has been lowered three inches from normal Navigator ride height. It rides on P285R60-19 tires and polished cast aluminum alloy wheels. Instead of a third seat, the Blackwood concept has a fully enclosed 4'8" pickup bed. The bed is covered by more than 20 square feet of African Wengewood sealed with clear epoxy to protect it from the weather. And instead of a conventional tailgate, it uses a pair of swing-out Dutch doors. The Wengewood bed cover is operated hydraulically by the key fob and the doors are manual. The Blackwood is powered by a 5.4-liter double-overhead-cam V-8 engine with four valves per cylinder, similar to the engine used in the 1999 Ford Mustang Cobra, generating 300 horsepower, and the interior features four bucket seats covered in Connolly leather, the same leather used in Jaguar luxury cars. A global positioning system is integrated into the center console.

MY, MY MERCURY - Mercury'ss 1999 concept vehicle is called (My) Mercury, and it is a small go-anywhere, do-anything vehicle with five doors and five seats, amber windows, an amber glass roof panel, and a hatchback assembly integrated into what is otherwise a sedan body. Mercury says it is a cross between a car, a truck, and a sport utility vehicle. Front doors of the (My) open conventionally, but the rear doors are rear-hinged allowing full unobstructed access to the interior. The top of the hatch section opens upward and the lower section opens outward to maximum useable interior space. The rear bucket seats fold down to yield a flat, 6-foot-long rear load space for outdoor adventure gear. In addition, (My) has its four bucket seats mounted on machined aluminum stands so the underseat area can be used for additional storage. The center console features an amber trackball that controls the audio, climate control and navigation systems, the displays for which are shown on a centered screen on the dashboard, just below the tachometer and speedometer units. The centered instruments (a throwback to cars of the `30s) early would allow the (My) to be built in either right- or left-hand drive. Although the (My) is a lineal descendant of the Mercury MC2 and MC4 concepts, it looks nothing like either one. Rather, the (My) reflects Ford design boss J Mays's 14 years at Audi, with very large wheel well opening flares, and a rounded roof section and rounded front end similar in character to the Audi TT coupe. It is further characterized by two round high-mounted headlamps and four round taillamps augmented by twin round exhaust outlets. Lincoln Mercury said they had no firm plans to produce either the Blackwood, or the Mercury concept vehicles.

EVOQ - MORE THAN JUST A `FUTURE' CAR -Cadillac's unwrapping of its Evoq roadster concept car at the International North American Auto Show today is not just a harbinger of the luxury marque's next two-seater, but a "rallying point for a restaging of the whole brand," said general marketing manager John Smith. "The Evoq allows Cadillac to reclaim the attitude and feelings that led to the 1953 LeMans and Cyclone" said Smith, two chromey dreams from Cadillac's prestigious past that were part of the show exhibit and meant to position Evoq in the same class. The new marketing message that Cadillac is using these days to sell its image is "where art and science meet." It is both lofty and aspirational to be sure. And while the Evoq has the potential to live up to that image, once it jumps from its car-show carousel to your local street corner, the venerable Seville and DeVille nameplates may have difficulty stirring the same feelings - not to mention the newercomers to Caddy's lineup, Escalade and Catera. The Evoq, which does not evoke memories of Cadillac*s last two-seater, the Allante, is meant to be part of a solution to the brand*s long-standing problem, the graying of its customer base. Caddy has for years been trying to figure out how to draw some youth to the brand. The brand*s average age buyer today is 60, though Escalade and Catera are attracting buyers a decade younger. Still, Smith is hoping that the version of the Evoq that eventually hits the streets will attract monied 40-somethings who have been attracted to cars like the Jaguar XJS and Mercedes SLK/CLK. "The Evok stands for much more than a future car," said Smith.

CADILLAC DROPS TO NO. 2 - As General Marketing Manager John Smith bowed to pay homage to the sleek Evoq sports car which Cadillac introduced at the North American International Auto Show, a gray - if not black - cloud hung over his enthusiasm. He, as well as all in attendance were waiting year-end 1998 sales reports, which are sure to show Lincoln topping Cadillac in sales for the first time since the last Truman administration. "Do I want to lose the sales leadership?,* asked a philisophical Smith. *No. But I have to take the broad view. We made money, met brand development targets and we also lost two months of production."

QUACKING CADDY AD CRACKS UP - Cadillac has been trying to "lighten up" its advertising in the last few years in the hopes of appealing more hip. Remember the talking duck that escorted the Catera to market (it died a merciful death confessed one Caddy insider). And last year, to launch the new Seville, Cadillac tapped an actor from Seinfeld to star in the ads that said, "It's What's Next." Critics have said the ads try a bit too hard for hipness. It may not be a surprise then that Caddy has recently gone beyond its usual ad agency resource, DMB&B/Detroit, to the Los Angeles office of that agency as well as to a New York agency it previously was not doing business with. Ads this year for Cadillac, said head of North American Operations Ronald Zarella, will be "more demonstrative in showing product benefits and to convey the marriage of art and science idea."

THE RETURN OF THE Z-CAR - The legendary Nissan Z may be heading for a comeback. A retro-looking version of the 2-seat sports car took its bows at the North American International Auto Show Tuesday. "This is not an exercise in nostalgia," said chief designer Jerry Hirshberg. "Rather, it's a fresh riff on an old tune. For now, Nissan officials stress that it's nothing but a concept car, but the reincarnated Z-car just may wind up in a dealer showroom sometime soon. A final decision is likely to be made by April, and production could begin within as little as 12 to 18 months. Several critical details have yet to be locked in place. Nissan's not sure whether to go with a V-6 or a high-performance 4-cylinder powerplant. "Our engine choice determines pricing," notes Nissan's top American executive, Mike Seergy. The goal is to keep the cost down below $25,000, roughly the same as the price-in inflation-adjusted dollars-the original Z-car cost nearly 30 years ago. It's also not clear if the car will be a true 2-seater, or delivered in 2+2 trim. 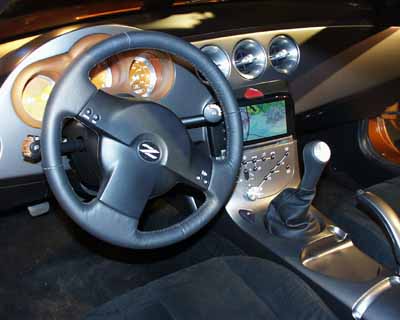 YOU'RE SUCH A SUT - That's Sport-Utility-Truck, to be more precise. It's another concept car from Nissan that just could wind up heading to a showroom soon. The SUT combines the room and comfort of a 4-door sport-utility vehicle, and the cargo carrying capacity of a mini-pickup bed. (The truck is based on the same platform as Nissan's compact Frontier pickup.) For bigger items, such as 4x8 sheets of plywood, the rear window, or backlight, swings open, and the back seats fold down. Nissan's not the only automaker interested in this hybrid truck concept. Ford unveiled its own version, the Explorer Sport Trac, on Monday. The Sport Trac goes into production shortly, and Nissan officials hope to get the go-ahead for the SUT by Spring.