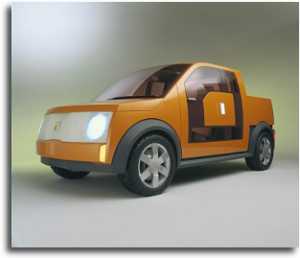 Aside from treacherous behavior on behalf of fellow press (how much flesh is a press kit worth, in reality?), the biggest disappointment of the recent Detroit Auto Show was Ford's 24-7 concept car, shown in the form of a bland trio of sedan, wagon and pickup.

Compared to the massed ranks of concepts shown by GM and DaimlerChrysler, Dearborn's effort was lackluster, short on style and pure automotive technology. As for the electronic technology that was its major feature, even that was essentially 'what-if' stuff that is not yet achievable - and if it was, its real-world usefulness is uncertain.

The judgement may seem harsh, but look at the evidence. The chassis technology of the 24.7 is good, but hardly cutting edge, since the car rides on a Focus floorpan that has merely been lengthened by two inches. The Focus may be America's Car of the Year for 1999, but it was European Car of the Year in 1998, which means it was designed about five years ago. Ford's production engineers are currently working on more advanced chassis technology than that which has been put forward as the company's dream of the future.

As for the style of the three 24.7 versions shown, they were nothing special, and would not have looked out of place in the graduation show of any good automobile design course. What's more, none of the three showed any real forward-thinking design ideas from the point of view of overall shapes or detail. The impression is that this is a lazy design operation, thrown together using such overworked concept car gimmicks as TV cameras instead of rear-view mirrors. The day a car manufacturer replaces a $2 piece of heated glass with a $100 piece of miniaturized electronic technology in a family car is the day that company's profits start to head south — and Ford isn't such a company. (If you want a modern take on the old 'TV camera at the rear' gimmick, look at GM's Terradyne concept, where a tailgate-mounted camera helps when backing-up or hitching a trailer.)

Ford's 24.7 design is so lazy that the PR department was hard-pressed to find something to put in the press releases. It came up with the following selling point for the 24-7 wagon: "When the key fob is clicked to unlock the vehicle, a light panel mounted in the interior headliner glows yellow, giving the wagon a warm, inviting feel."

The interior light comes on when you unlock by remote? Haven't the Ford styling people driven an Acura — or most other new cars — lately? But it gets worse. The release for the truck says: "When the key fob is clicked to unlock the vehicle, a light panel mounted in the interior headliner glows orange — showing that this pickup is always ready for any adventure." As for the coupe, well, when you click its key fob, "a light panel mounted in the interior headliner glows green — welcoming the driver into the vehicle." So there we are, yellow means inviting, orange means adventure and green means welcome — the whole means there's not much to say about the 24.7's interior.

But according to Ford, it's when the interior light goes off and we prepare to drive away that the 24.7 comes into its own, thanks to its advanced electronics from Visteon. Now there is no doubt that the electronics are advanced and capable — but are they useful? One of the unique features of the 24.7 is the ability of the dash and in-car systems to be individualized to suit different users. This means each user of the car can have her or his own set of instruments, and that the gauges appear on the instrument panel in the ideal configuration for the specific driver. The available choices include: speedometer, oil, fuel, GPS/map, Internet, e-mail, mobile phone, compact disc/tape/radio and clock. Do you really need to select which gauges are on your car's dash and where they are placed? And if you were an enthusiastic driver, wouldn't you want more than just three that refer to what your car and its engine is doing?

No, what you're really interested in is checking your e-mail, downloading a couple of files, and getting up to date with the stock market. That's when you are not enjoying an interactive videophone conversation, in which you can see who you are talking to and they, thanks to a camera mounted behind the rearview mirror, "positioned to transmit images of the driver and passengers" can see you.

This all sounds fine, but there is a temptation to think in terms of all this telephone-based technology in terms of the way we use it at home or the office. That means on a free local calls basis — but everything in a car is done on cell-phone rates, which may not be so popular with the head of the household whose kids are going to be among those with personalized dash layouts on the family 24.7. As to whether the cell-phone system is yet ready to support all this mobile Net surfing, that's another question.

The other undetermined factor about the 24.7 is whether there are any households left in America where a new car is shared between all the family members. Especially when —again according to the language of the strained press releases — their lifestyles are as diverse as those of potential 24.7 owners. Coupe users, we are told, are "people who are constantly moving - whether they are rushing to the next job site or looking for the second or third party of the night." Then there's the pickup, which "can be loaded up with all of the necessary adventure gear for a weekend out in the wilderness, or you can fill it with books and roam around campus during the week." As for the wagon, "It's not just 'Mom's' vehicle. It can put Dad's office on wheels or keep the kids connected to their friends through the Internet — all with the simplest voice command." Such a switched-on, cyber-savvy, action-oriented family — and they all have to share one small car. Where did Dad and Mom go wrong?

Ford makes great play of the fact that "all of the operations are voice activated, allowing the driver to keep both hands on the wheel." But how easy is it to command all these things by voice? The electronics may be intelligent and able to understand a number of languages and accents, but what about the drivers? Can they all remember the words required to activate each feature? It's doubtful. When you have to remember the exact word order to control the dash instruments, the heating system, the radio, the CD player, the computer and the phone (voice or video) Visteon had better teach their electronics to understand a few curse words, too.

And what's all this about keeping your hands on the wheel at all times? If Ford and Visteon want to make something that will enable us to do that, rather than making the switch or button obsolete they should come up with something really useful. A lipstick applicator/hair arranger for women and a nose-explorer for men — or a unisex appliance that will tap on the roof in time with the radio — would be a good start.

The 24.7 is technology led by fashion rather than utility. We don't need to check our e-mail in the car, especially if, in order that we may keep our hands on the wheel, it is read in one of those strange metallic voices that reads each digit in a number at a very slightly different pitch from the previous one. And we certainly don't need people holding interactive videophone conversations with their nearest and dearest at 80 miles an hour on the freeway — not within fifty feet of my car, at least.

The 24.7 is an example of styling — or 'design' as Ford style guru J Mays prefers — overcoming substance. It's wrapped around the Internet because the Internet is trendy, and in the design-led world Ford is entering under Mays' guidance, trendy is everything.

But it's not necessarily the real world. Not long ago somebody described the Internet as "CB radio for the new millennium." They could be right, they could be wrong, we don't yet know, but what we do know is that traffic is denser and travels more quickly than ever it has before. The last thing we need is a car that's designed as a rolling workstation, providing even more distractions from the important task of avoiding crashing into those who share the roads with us.