GM HAS STRONG Q2 It wasn't all that long ago that General Motors Corp.'s North American automotive operations, or NAO, were being written off for dead, but an unexpectedly strong showing from GM's home market operations helped propel the automaker's second-quarter earnings to stronger-than-expected levels. GM posted profits of $1.7 billion, a full five-times higher than the $306 million it recorded during the strike-torn second quarter of 1998. On a per-share basis, GM earned $2.66, as opposed to $0.40 a share in 1998, and well above analysts' consensus of $2.56, according to First Call Corp., which tracks earnings expectations. (Figures have been adjusted to reflect GM's spin-off of its Delphi Automotive Systems subsidiary this past May.)
For more on GM’s second-quarter news, click here

The S80 scored five stars for both driver and front-passenger safety; its standard safety equipment includes a standard side airbag for the driver as well as an inflatable curtain that protects the driver and left rear-seat passenger from impact with the interior of the vehicle. The side-impact test simulates a collision at 38.5 mph. The five-star rating will also apply to the 2000-model S80 since the safety features will not change, NHTSA added.
For more on the newest Volvos, click here


EU SAYS CARMAKES MUST RECYCLE Carmakers that sell vehicles in the European Union may be forced to take back vehicles for recycling under new legislation passed despite German opposition, Reuters reports. The European Parliament must first approve the plan, which states that after 2001, cars must be recycled by their makers, who must absorb the costs of recycling beginning in 2006. The German government in particular opposes the plan, since nearly half of the vehicles sold in Europe are manufactured in Germany. The plan could cost as much as $200 for each of the 150 million cars now on European roads, or $30 billion, according to the European Automobile Manufacturers' Association. The law is aimed at reducing the amount of pollution caused by gross polluters; it would apply to all cars sold in EU countries, no matter where they are produced, and would require manufacturers to recycle 80 percent of their weight.

MITSU PLANS 2001 MINI-UTE The ranks of mini-SUVs will grow even more by 2002, as Mitsubishi has announced its plans for a new U.S.-bound mini-ute. Mitsu announced last week that its new mini-ute would be exported from Japan to the U.S., probably beginning in the 2002 model year, to compete with the Toyota RAV4, Honda CR-V, and the brewing Ford Escape, not to mention the coming Hyundai Santa Fe. Mitsubishi President Katsuhiko Kawasoe made the announcement last week in Las Vegas, but offered no details of the new SUV, except that it will be "completely new" and built in Japan.
For more on the Hyundai Santa Fe, click here
For more on the Ford Escape, click here

MITSU OPEN TO MERGER? At the same press conference, Kawasoe indicated Mitsubishi is open to a merger, but that such a move is not a priority for his company.

"Many observers argue for a merger first and streamlining, restructuring and profitability second," Kawasoe said. "We continue seeking mutually beneficial business collaborations without capital tie-ups," he added. "This is our fundamental position and it remains unchanged. We, however, will not reject any possibility out of hand. If we believe we can enjoy a true equal partnership, then we may proceed with a possible wide-range tie-up." In recent months Mitsubishi has been the target of merger speculation, especially in light of a recent agreement with Fiat SpA to jointly produce a new sport-ute in Italy beginning in two years.

SUBARU WORKING ON NEW V-6 Apparently, Subaru isn’t content with the four-cylinder powering its current range of vehicles. The company disclosed last week that it is developing a six- cylinder engine for introduction in U.S. models next year, President Takeshi Tanaka said. Subaru parent company Fuji Heavy stopped producing passenger-car six-cylinder engines in December 1996 (along with the SVX sport coupe that hosted the engine), but has decided to enter the V-6 fray again in light of its popularity on the American market. The engine is expected to be added to the Legacy, Outback and Forester models within a year.
For more on the newest Legacy series, click here


NEW ENGINE HAS THREE MOVING PARTS A new engine with V-8 power, just three moving parts and weighing only 100 lb has the endorsement of some famous names.

Introduced last week by Australian engineer Steven Manthey, the OX2 engine has attracted the backing of such well-loved lights of the auto industry as Carroll Shelby and Bobby Allison. Manthey says the only moving parts on the engine are the cylinder block (which rotates) and two piston plates. The OX2 has no crankshaft, valves, or oil or water pump, still Manthey and his backers at Advanced Engineering Technologies (with some money from GM) believes that the OX2 is more fuel-efficient and has lower emissions than a conventional internal-combustion engine. The engine is still under development, but at least Carroll Shelby sounds convinced: he told Reuters he doesn’t expect a big rush to the new engine from Advanced Engineering Technologies, though. "Let's face it, Detroit has billions of dollars invested in conventional internal combustion engines, so they are not going to come to us and say 'God bless you for undoing all our work.’"

GM RECALLS 3.5 MILLION TRUCKS GM will recall some 3.5 million pickup trucks, sport-utility vehicles and vans because of problems with their anti-lock brake systems, NHTSA said last week. The recall comes after a five-year investigation, and covers some 10,861 reports of braking problems on GM trucks equipped with the ABS units in question, which resulted in 2,111 crashes and 293 injuries. "If the vehicle is operating in two-wheel drive, the ABS system erroneously believes that it is operating in four-wheel drive, a condition that could extend stopping distances," the federal agency said in a report. NHTSA was unable to confirm the vast majority of complaints, but insisted on the recall based on the pattern of complaints. The recall involves Chevrolet Blazer and GMC Jimmy SUVs, and the Chevrolet S-10 and GMC Sonoma four-wheel drive pickups.

MAZDA RECALLS 626, MX-6 Mazda says it will recall more than 176,000 cars and minivans because of faulty door locks and incorrectly assembled fuel filler pipes, the company announced last week. Mazda will replace or repair a fuel filler pipe assembly that does not properly seal the emissions system on 172,154 of its 626 and MX-6 models in the U.S. Mazda also said a sliding door latch on as many as 4,222 2000-model MPV minivans in Japan and an undisclosed number in the U.S. are faulty. A build-up of dust in the door-locking mechanism may cause the side door to open while driving. Mazda said there have been no reports of injury or accidents caused by the problems with its cars. Earlier this month, Mazda began recalling about 87 2000-model MPV minivans in the U.S. after it discovered that improperly installed intake manifold assemblies on the vehicle could cause rough idling or fuel leaks.

ROLLS RECALLS FOR SEAT HEATERS The troubles of the everyday worker haven’t evaded Rolls-Royce: the manufacturer of tony Rolls-Royce and Bentley cars has recalled 1,725 vehicles worldwide because a heat sensor in the leather lined seats may be faulty. "In the four instances we've come across the sensor is wrongly located and doesn't turn the 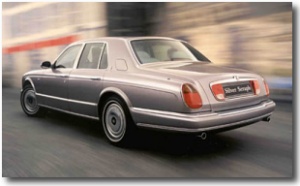 heater off when it should," spokesman Richard Charlesworth told Reuters. "Even though no one's been hurt, we have issued a recall to dealers to check all Rolls-Royce Silver Seraph and Bentley Arnage motor cars," he said.


MITSU SAYS DC V-6 STILL ON Mitsubishi has no plans to stop deliveries of its V-6 engine to DaimlerChrysler, despite a report by Japan’s Jiji News Agency, the company said last week. The news agency reported that DaimlerChrysler was developing engines of its own to replace the Mitsu-made 2.5-liter and 3.0-liter V-6s found in the Sebring/Avenger coupes, Stratus/Cirrus sedans and minivans. However, Mitsu’ contract to deliver the engines runs out at the end of 2000. "We will continue supplying engines to DaimlerChrysler if the company wants to use them," a Mitsubishi spokesman said.

IS ASIA’S SLUMP OVER? Honda’s sales in southeast Asia are growing for the first time in three years, a further sign that the region may be pulling out of its long-winded recession, Reuters reports. In Thailand, Southeast Asia's largest auto market, Honda sold 9,027 vehicles in the six months through June 30, 3 percent more than in the same period a year earlier, the company said. Sales in the Philippines and Malaysia also rose, it said. The six-month figures suggest Honda sales in Asia will top last year's 128,500 vehicles, down 24 percent from 1997. Honda's Asian sales, which accounted for 5.6 percent of global sales last year, peaked at 185,990 vehicles in 1996. A rebound in the region is good news for Japanese automakers, which rely more on Asia for sales than their U.S. and European counterparts, Reuters reported.