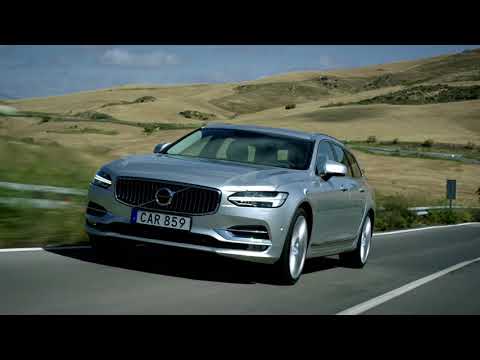 The Volvo V90 wagon is a full-size luxury wagon and the spiritual successor to the conservative and contemporary wagons that helped put the Swedish automaker on the map. It's offered as a tall-riding wagon too, called the V90 Cross Country, that very nearly treads into crossover country—although we'd stop short of taking anywhere other than a muddy field.

Volvo expects the Cross Country to be more popular that the regular wagon in the U.S., however. They may be on to something; other automakers such as Buick and Mercedes have expressed sincere interest in tall-riding wagons in the U.S., largely riding on the coattails of the successful Subaru Outback.

With the V90, Volvo offers two powertrains: an inline-4 with turbocharging only, or turbocharging and supercharging. The V90 Cross Country is available with only the latter.

The V90 is related to the S90 sedan and XC90 crossover SUV, with more space than the former but not a third row like the latter. Like most of Volvo's cars and crossovers, the V90 offer a turbocharged inline-4 paired to front-wheel drive in its T5 version (V90 only), or a turbocharged and superchaged inline-4 paired to all-wheel drive in T6 versions. Both powertrains are mated to an 8-speed automatic.

The V90 and V90 Cross Country prioritize comfort ahead of capability and even set to its sharpest, sportiest mode for driving dynamics, it's been especially compliant. Volvo's priority for passenger comfort comes through: the multi-adjustable seats are all-day comfortable with plenty of room for people and gear.

But many wagons and crossovers can do that, if we're honest. What helps set the Volvo apart is its conservative and organic exterior shape that helps disguise the car's mass-produced beginnings. Despite riding atop a platform that will eventually underpin all Volvo cars and crossovers, the V90's shape is wholly unique. It's lines arch from front to rear, and even though the V90 is a front-driver by nature, its long hood proportions hint otherwise.

Like Volvos before it, the V90 has a relatively large number of features devoted wholly to safety. Its Pilot Assist program, which made its debut on the XC90, is upgraded in the V90 and features a pedestrian detection system that can automatically brake to avoid hitting people or large animals.

A tablet-esque infotainment system is standard on all models with a vertical screen orientation that's a departure from the norm. It helps the interior look elegant without being too flashy, and helps the V90 and V90 Cross Country separate in what may become a growing segment for buyers.

Be the first one to write a review on 2020 Volvo V90
Rate and Review your car for The Car Connection! Tell us your own ratings for a vehicle you own. Rate your car on Performance, Safety, Features and more.
Write a Review