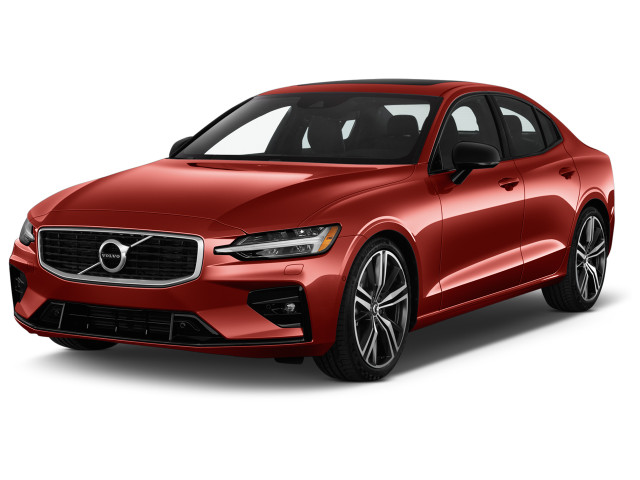 The Volvo S60 is a mid-size sporty luxury sedan that directly competes with a trio of German models—the Audi A4, BMW 3-Series, and Mercedes-Benz C-Class—as well as the Jaguar XE and Genesis G70.

Like others in the same class as the S60, Volvo packs the sedan with features but they skew toward safety. The advanced features include automatic emergency braking with pedestrian detection, adjustable dampers, and brake-based torque vectoring.

The S60 is the first Volvo to be built in America and exported elsewhere.

Volvo's latest sedan made its debut in South Carolina, at the automaker's new Charleston production plant. The four-door sedan sports scaled-down looks from the S90, and other related 60-Series vehicles such as the XC60 crossover SUV and V60 wagon.

The S60 sports the now-familiar "Thor's hammer" headlights up front, and rides atop Volvo's scalable frame that was lifted from larger cars.

Available with a trio of turbocharged engines and one plug-in hybrid variant, the S60 comes in front-drive T5, all-wheel-drive T6, and high-power T8 plug-in hybrid variants. The three powertrains, which make 250, 316, 400, and 415 horsepower in the Polestar Engineered model respectively, mate exclusively to an 8-speed automatic.

Like the XC60 and V60, the S60 features a tablet-style touchscreen up front, with a tech-heavy interior modulated by Swedish style. Interior accents such as driftwood trim are available and brighten up the cabin. Active safety features such as forward-collision warnings with automatic emergency braking are standard on all models.

Volvo sells the S60 for nearly $36,000 to start, but also makes the sedan available via a "subscription" service that asks for flat monthly fees that include insurance and maintenance.

Volvo launched the first-generation S60 for the 2001 model year. It was positioned as a smaller counterpart to the range-topping S80 luxury sedan, sized to compete with mid-size luxury and sport sedans. These cars carried standard front-wheel drive, with sportier models offering all-wheel drive. Unlike the long-lived XC90 crossover—which is just now being replaced for the first time—this S60 didn't weather the years very well; the same basic model was offered for a decade and was unable to hold its place in the market toward the end.

Despite starting prices of $30,000 or more, S60 sales were strong following its release and remained high until the 2005 model year, when consumer interest started to wane. But even the introduction of the 300-hp S60 R in 2004, an extensive facelift program in 2005, and updates in 2006 couldn't keep the car from fading away into obscurity. By the time the new S60 was shown at auto shows in 2010, it was long overdue.

The S60 launched in 2011 was more attractive and stylish than the boxy, square, and indestructible Volvos of yore. It’s a luxurious mid-size sedan and the most affordable four-door in the brand's current lineup.

When the current S60 arrived in the U.S., it was offered only in one model, the high-performance T6. At this level, the S60 used a turbocharged 3.0-liter inline-6, a 6-speed automatic transmission, and all-wheel drive. It was certainly quick, but couldn't quite compare to the other Europeans in the segment when it came to handling.

The S60's more aggressive, fashion-forward design still manages to keep the visual identity of a Volvo. Inside, the S60 was lavish in terms of its driver-oriented details—especially the ultra-cool floating center stack. Four adults could sit comfortably, with a fifth passenger in the back if everyone's friendly. The rear seat splits 40/60 and the trunk opening is much larger than that of the first-generation S60.

The 2012 model year brought two more models to the S60 lineup, the entry-level T5 and performance-oriented T6 R-Design. The T5 came with a 250-hp, 2.5-liter turbocharged inline-5 and front-wheel drive. The T6 R-Design used a hotter version of the T6's inline-6, with 25 horsepower more for a total of 325 hp. R-Design models come with standard all-wheel drive to help put all of the power and torque down.

In 2013, Volvo added an all-wheel-drive option to the T5 model while also boosting that engine's performance. The company also rearranged S60 trim levels somewhat, into Premier, Premier Plus, and Platinum trims, and added more technology features like rain-sensing wipers as standard equipment. The 2014 model added a slightly redesigned front end and various minor updates to the instruments, dashboard, and interior.

After receiving a number of minor styling, cabin, and technology improvements, as part of a light refresh it received for the 2014 model year, front-wheel-drive versions of the S60 received new Drive-E powertrains for 2015, with a new 240-hp 2.0-liter turbo-4 powering the T5, and T6 models getting a 302-hp version that's turbocharged and supercharged. A completely new version of Volvo's Sensus infotainment system (with new premium audio) followed, as part of a "2015.5" model year.

In 2015, the S60's wagon cousin, the V60, finally made its first appearance in the U.S. The V60 fell somewhere between hatch and wagon status, offering slightly more cargo capacity than the S60 sedan. A V60 Cross Country was also available.

Volvo added two new versions of the S60 in 2016, with one aimed at the luxury crowd and the other for the adventurous sedan buyer, if such a thing exists. The S60 Inscription is basically a long-wheelbase version of the standard car, offering what Volvo claims is the largest rear seat in the segment. It was no doubt developed for the Chinese home market of Volvo's owner, Geely, where long-wheelbase versions of luxury standard sedans far outnumber the kinds of cars Americans buy.

The other new model is called the S60 Cross Country; it's basically an S60 on stilts, done up in the style of Volvo's XC models and recalling the AMC Eagle sedan in its jacked-up stance.

For 2017, Volvo moved the S60 to all 4-cylinder engines, ditching the 5- and 6-cylinder versions from prior years. The base turbo-4 can be paired to all-wheel drive, a first for Volvo sedans. For 2018, the S60 added standard heated seats—as a car from Sweden should.

Rate and Review your car for The Car Connection! Tell us your own ratings for a vehicle you own. Rate your car on Performance, Safety, Features and more.
Write a Review
2016 Volvo S60 4-Door Sedan T5 Drive-E Premier FWD

Close but no cigar