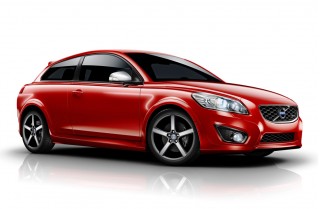 The Volvo C30 is a sporty compact hatchback coupe that seats up to four. With a distinctive design and a more rakish look—plus perkier performance—than most mass-market hatchbacks, the C30 takes on some of the most stylish hatchback or coupe models such as the Mini Cooper S and Fiat 500, as well as the Mazdaspeed3.

The C30 originally went on sale for the 2008 model year and was inspired by both the P1800ES 'shooting brake' sports car of the early 1970s and the Safety Concept Car that the Swedish automaker had displayed at several auto shows in the years leading up the C30's release.

With those design roots, as well as a layout that places the priority on style (and performance) over comfort and space, the Volvo C30 has in recent years been the closest thing Volvo has to a sports car or sporty coupe. Prominent flanks as well as a blacked-out hatch treatment both hark back to the 1800ES on the outside, while from the front the C30 fits right in with the rest of the modern Volvo lineup.

Inside, the C30 has a cool, trend-setting cabin that draws from Scandinavian design and features the 'floating' center stack—placing audio and climate controls in a thin panel that leaves space for a pass-through and storage just behind. Two-tone leather seats with contrast-stitching, plenty of matte-metallic trim, and other soft-touch surfaces altogether give the interior a luxury feel, although ride comfort is just adequate and we've found that the interior can get boomy over coarse surfaces. Likewise, the rather low roofline leaves headroom tight, and the two small backseats are barely a step ahead of 2+2 seating—not quite sized for average adults. In back, cargo space can be a little disappointing, too, as the cargo floor is high and the hatch opening is quite narrow.

Compared to other small hatchbacks, the C30 drives like a somewhat larger, more mature coupe; you won't find the eager feel of the Mini Cooper S, but at the same time power from its 227-horsepower, 2.5-liter five-cylinder engine comes in a remarkably linear, even fashion; and because the turbocharged engine makes its peak torque as low as 1,800 and has a little turbo lag, it tends to do just as well with the five-speed automatic transmission as it does with the notchy six-speed manual. Handling isn't quite the C30's forte; there's a capable chassis underneath it all, but a nose-heavy driving feel and rather long-ratio steering aren't as inspiring as the styling might hint.

The C30 is a decent deal, provided you go for one without many options. Add leather, a moonroof, or the navigation system—as well as the pricier R-Design package—and you can add nearly $10k.

The flashier R-Design model—with upgraded wheels and trims, primarily—was introduced for 2009; then for 2010 Volvo upgraded standard equipment on the base C30 so that Bluetooth, cruise control, and a trip computer were all included. Volvo introduced a subtle refresh for the C30 for the 2011 model year, with a new front fascia, reshaped fenders and hood, and a new honeycomb-design inlay, plus new headlamps. Only minor equipment changes and an expanded R-Design lineup brought the C30 into 2012 and 2013.

Be the first one to write a review on 2013 Volvo C30
Rate and Review your car for The Car Connection! Tell us your own ratings for a vehicle you own. Rate your car on Performance, Safety, Features and more.
Write a Review