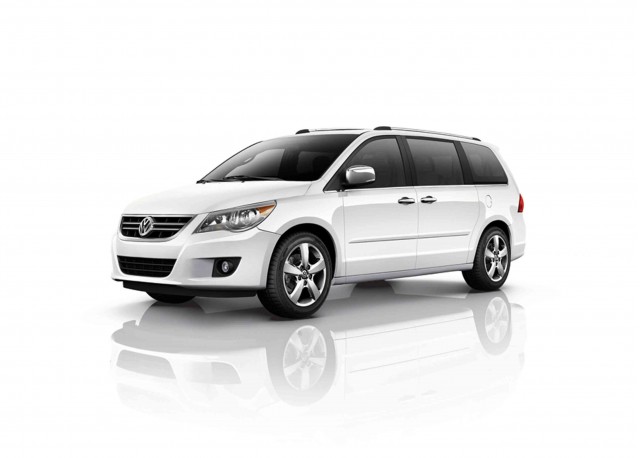 Something of an anomaly in the German carmaker's lineup, the Volkswagen Routan seven-seat minivan was an attempt by the German carmaker to compete head-to-head with the highest-volume names in that segment: the Chrysler Town & County and Dodge Grand Caravan twins, the Honda Odyssey, and the Toyota Sienna.

But you may notice more than a few similarities between the VW and the Chrysler minivans--and you wouldn't be wrong. An unusual agreement between Chrysler and Volkswagen gave VW a new model that was jointly engineered but built and supplied by the U.S. automaker. The differences include unique front-end styling, revised lines at the rear, and interior trim that's distinct to the Volkswagen. The German engineers had also tweaked the suspension tuning for tighter handling, giving it a more sophisticated ride and a quiet interior, though Chrysler's engineers adopted many of VW's revisions for their own model updates a year or two later.

First sold as a 2009 model, the Routan was unceremoniously discontinued after the 2012 model year—following mixed messages from VW as to whether any 2013 models existed. Volkswagen is expected to start building a mid-size seven-seat crossover in its Tennessee plant, based on the underpinnings of its next-generation Passat sedan, perhaps as a 2015 or 2016 model.

Meanwhile, for families who need that third-row seat, there may be leftover 2012 Routans on dealer lots well into 2013. And the third row in the Volkswagen Routan does fold flat--and even that rearmost row offers enough comfort for adults, at least on short trips. VW didn't, however, get access to one of Chrysler's greatest innovations in minivans: the second-row Stow 'n' Go feature (which folkds and drops the rear seats neatly into the floor). The Routan instead gets second-row captain's chairs that fold and slide forward. (It didn't get the now-discontinued Swivel 'n' Go either--which let the second row face the rear, with a removable fold-up table).

The first 2009 Routan originally came with either a 197-hp, 3.8-liter V-6 or a 251-hp, 4.0-liter V-6, both with a six-speed automatic transmission. Between these two, the 4.0-liter was the better choice by far. Starting with the 2011 model year, Chrysler installed its new 3.6-liter Pentastar V-6 into its minivans, so the Routan got that powertrain, too. It's far smoother than the previous engines and has improved fuel economy.

The Routan has been offered in S, SE, SEL, and SEL Premium trims, with SE and SEL models getting the removable captain's chairs. The combination of these various seating arrangements allows all models to fit 144 cubic feet of cargo with all rear seats stowed. There have been only minor changes to the Routan over the past several model years, other than that powertrain news.

Routan SE and SEL models offer some of the same options as the Chrysler models, but under slightly different names in some cases. Power rear windows, a power liftgate, and touch-screen navigation are on offer, as is a JoyBox (MyGig) 30-gigabyte hard-drive media system. The Volkswagen Routan also remains higher-priced than the Chrysler vans, which leaves us scratching our heads on the value and the appeal.

The Chrysler minivans' top safety ratings from the IIHS also apply to the structurally identical Routan, so it's one of the safest picks in this class; blind-spot monitors and a rearview camera system are available.

Be the first one to write a review on 2013 Volkswagen Routan
Rate and Review your car for The Car Connection! Tell us your own ratings for a vehicle you own. Rate your car on Performance, Safety, Features and more.
Write a Review