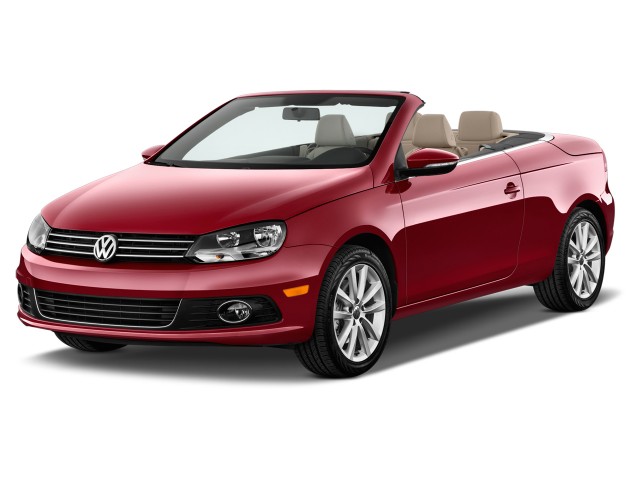 The Volkswagen Eos is the automaker's outgoing hardtop convertible. The Eos offers 2+2 seating in a vehicle halfway between a compact and mid-size car, and its lines flirt with the edge of the luxury market. The Eos is a unique model in the Volkswagen lineup—its folding hardtop that collapses into the trunk is unique too—although it's built on underpinnings from various earlier generations of Golf, Jetta, and Passat.

The Volkswagen Eos competes with the Buick Cascada, the Mini Cooper S Convertible, the discontinued Volvo C70, and perhaps the Mercedes-Benz SLC convertible.

Despite offering a "Final Edition" for 2015, Volkswagen made available the Eos for 2016, which was the last year for the Eos.

When it launched back in 2007, the Eos was intended to be the successor to its VW Cabriolet model that was based on an earlier generation of Golf hatchback—and that's how VW pitched it. That Cabrio had a folding cloth roof, though, so the Eos was definitely a step up in insulation, weather protection, and comfort. It's also a hit with kids, who will relish watching the folding roof lift up, separate into give panels that nest inside each other, and retract to drop itself into the trunk compartment—all in less than 30 seconds.

The Eos' unique style and packaging give it few natural competitors; the MINI Cooper S Convertible could be considered an alternative, as could the BMW 1-Series Convertible. The MINI is smaller, and the BMW can be considerably more expensive, however.

The packaging is quite marvelous in the Eos, in fact. Its trunk is reasonably roomy, and the power top won't descend if there's anything in its path. The back seat is, surprisingly, roomy enough for kids—or even shorter adults, for brief stints—and access isn't bad. Wind deflection isn't great at highway speeds, though, so you'll probably travel at speed with the top up.

The Volkswagen Eos hasn't changed a great deal since its 2007 launch, except for some changes to trim levels and the loss of the VR6 engine option. All models include a pop-up roll bar plus head and thorax side bags, along with more standard features than you'll find on VW's other small cars.

In 2010, VW pared down the engines to a single 200-horsepower, turbocharged 2.0-liter 4-cylinder, here paired with either a 6-speed manual transmission or the optional, and excellent, 6-speed automated manual gearbox.

The first two years of Eos also offered as an option VW's 250-hp, 3.2-liter VR6, which came only with the DSG. What it gained in smoothness and exhaust note, however, the V6 gave up in fuel economy—it was much thirstier—and it really didn't feel much faster on the road. The turbo-4 engine does well on fuel economy, with EPA ratings of 21 mpg city, 31 highway.

On newer versions Bluetooth has been made standard and larger wheels have helped spruce up the Eos' appearance somewhat. And for 2013, VW furthered that by introduced a new Sport trim, with a lowered suspension, adaptive bi-xenon headlamps, fog lamps, and special 18-inch alloy wheels, plus a touchscreen audio system.

Handling and roadholding are better than the car's conservative exterior might suggest. The Eos is a better-tuned, better-balanced vehicle than all the smaller cars in VW's lineup except for the GTI—and it's considerably more refined than that hot hatch. Ride quality in the Eos is also supple and composed, especially for such a short vehicle.

Rate and Review your car for The Car Connection! Tell us your own ratings for a vehicle you own. Rate your car on Performance, Safety, Features and more.
Write a Review
2016 Volkswagen Eos 2-Door Convertible Komfort

Best car I Ever owned.