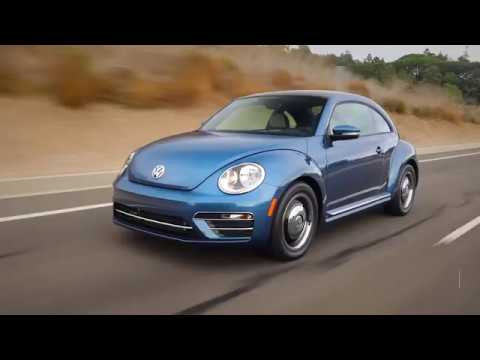 The Volkswagen Beetle is an automotive icon. In older versions, it's one of the biggest selling cars of all time. In newer models, it's a fun two-door that shares similarities with other small cars from VW. The future for the car is anyone's guess—but VW has said that 2019 will be the current model's last chapter.

The Beetle falls into two distinct eras—the Bugs of the pre-1998 era and the completely new Beetles inspired by the original, but based on Golf running gear. The current Volkswagen Beetle carries the 75-year-old iconic nameplate, but little else from its earliest ancestors.

Based on the Volkswagen Golf, the Beetle can be had in coupe or convertible form. Engine options have been pared down in recent years to just a turbo-4 paired to an automatic. For 2019, the Beetle Final Edition special models signify the end of a long run... although VW isn't ruling out yet another reboot.

The current generation VW Beetle carries its engine in the front, powering the front wheels—unlike the original, which used a clattering, but reliable air-cooled flat-4 engine at the rear, driving the rear wheels. Like the New Beetle before it, the underpinnings come from the VW Golf and Jetta models, despite the very different bodywork. Compared to the long-lived New Beetle, the completely revamped 2012-present Beetle adopts a new look that's flatter, a bit more aggressive, and a bit larger than before. Its more muscular stance comes from an additional 3 inches of width.

The VW Beetle today is aimed at specific buyers. It's also more complicated and pricier than the original, meaning it's less about cheap and cheerful transportation than a "lifestyle car" whose owners prize attitude, style, and perhaps even whimsy. It doesn't compete any longer with higher-volume, boxier, more practical, lower-cost alternatives that can be found everywhere. The Beetle competes with a variety of such cars, from the legendary Ford Mustang coupe all the way down to high-design minicompact like the Mini Cooper and Fiat 500. All those competitors, it should be noted, offer both a coupe and a cloth-roofed convertible in their lineups.

The Beetle convertible and coupe share the same powertrain options. Its soft top is power-operated and can be opened or closed in less than 10 seconds at speeds up to 31 mph. Upon its release, the full range of engines included a 170-hp 5-cylinder engine, with either a 6-speed manual or automatic transmission powering the front wheels, and a turbocharged 200-hp, 2.0-liter inline-4 with a choice of manual or dual-clutch automatic transmissions available. The 140-hp, 2.0-liter diesel joined the family a few months later, making it the highest efficiency Beetle, rated at up to 41 mpg highway.

Compared to that of the New Beetle it replaced, the current car's interior is decidedly less quirky, if no less well designed. The dash-mounted bud vase is gone, making the car a bit more gender-neutral, and VW has brought back the double-decker glovebox of the original car. All of the controls are well laid out within a pleasing and mildly retro design, and the current car is plenty of fun to bop through traffic in or let loose on a two-lane. The exterior design means it's hard for some to find the ends of the car, but it's a tidy size that's easy to judge all the same, and forward visibility has been improved in this generation.

Today's Beetle continues the tradition of special-edition models, though. Coinciding with the convertible's launch in 2013, Volkswagen announced a range of decades-inspired design and styling packages, with themes from the 1950s, 60s, and 70s. They were offered only for a limited time. The Beetle also offers heritage-design wheels, which look like steel wheels with shiny hubcaps, but are in fact alloys with domed centers.

For 2015, the Beetle received two new engines. The diesel engine was replaced with a new turbodiesel of the same size making 10 more horsepower and adding a bit more efficiency. The EPA highway figure now reaches 41 mpg for both manual and automatic models, and city numbers have increased by a few mpg. The new engine continues to offer effortless torque and makes a good companion for those using their Beetle for long-range cruising. The 2.5-liter inline-5 gave way to a 1.8-liter turbo-4 making the same horsepower, but with better fuel economy.

VW included for 2016 a new MIB II infotainment system with 5.0- or 6.3-inch touchscreens and, finally, a USB port. VW also added automatic emergency braking that applies the brakes when a collision is detected to reduce the possibility of a second impact and more damage. A slightly more butch version of the Beetle, called the Beetle Dune was made available in 2016.

The 2019 Beetle Final Edition lives up to its name by closing the book on the Beetle, at least for now.

When it was first reintroduced in 1998, the so-called New Beetle launched with a choice of a 115-hp, 2.0-liter inline-4 or VW's turbocharged 1.9-liter inline-4 making either 90 or 100 hp. With either engine, the Beetle provided reasonable pep, but it was not fast. The TDI engine was the pick of the two for frugal buyers, with highway mileage figures well into the 40s. For buyers who wanted more power, VW introduced a 1.8T model in 1999. Its 150-hp gasoline turbo-4 gave the New Beetle much more enthusiastic performance without using much more fuel than the base engine. A Turbo S model, offered only from 2002 to 2004, brought even stronger acceleration and more involvement, thanks to a 180-hp version of the 1.8T engine and a 6-speed manual.

While the New Beetle was an obvious update to the beloved original, it differed in several very important ways. The New Beetle used a water-cooled engine up front, powering the front wheels, while the classic Bug had an air-cooled engine in back driving the rear axle. The New Beetle also shared many parts with the Audi A4 and VW Passat of the time. Its shape and details like the dash-mounted bud vase provided the character of the old car, easily setting it apart from its low-cost contemporaries.

For 2006, Volkswagen phased out the 4-cylinder engines and introduced a 170-hp, 2.5-liter inline-5, mated to either a 5-speed manual or 6-speed automatic. This engine was reasonably strong and worked well with the automatic transmission, though it didn't feel as sporty and eager as the turbo-4 that preceded it. In any of these New Beetle models, ride quality was quite smooth. Turbo S models were among the sportiest, but otherwise handling wasn't particularly inspiring.

In coupes, back seat space was too cramped for adults but good enough for a couple of smaller kids. Convertible models, introduced for 2003, have slightly less backseat space but a well-configured, triple-layer electric soft top. In its later years, New Beetle convertibles made sense long after the coupes seemed dated, as the open-top versions made great cruisers and were an affordable upgrade to the Sebrings and Solaras that were so common in rental fleets.

The design of the New Beetle changed very little over the years and many feel it didn't age well. To make matters worse, VW squeezed out a little more of the feature content each year, meaning that many of the features once offered on the Beetle—including leather upholstery, fog lamps, and rain-sensing wipers—simply vanished. Special-edition models followed special trim and color schemes, as well as flashy wheels, though these models didn't offer many additional features. Over the years, the Beetle's crash-test scores were lackluster. For 2010, the Final Edition New Beetle offered special paintwork and unique-to-the-model 17-inch wheels, as well as standard electronic stability control and fog lamps.

Rate and Review your car for The Car Connection! Tell us your own ratings for a vehicle you own. Rate your car on Performance, Safety, Features and more.
Write a Review
2018 Volkswagen Beetle Dune Automatic

My fifth of the same, always a pleasure, no sad comments

up to now the best of the kind, second week of ownership
people found this helpful.
Was this review helpful to you? Yes
2016 Volkswagen Beetle 2-Door Automatic 1.8T Classic

So Far So Good only had it a week

I like the car very much there are some quality issues that need to be addressed I am hoping that Volkswagen steps up to the plate on that...
people found this helpful.
Was this review helpful to you? Yes
For 2015 Volkswagen Beetle

Would what a smasher car ...