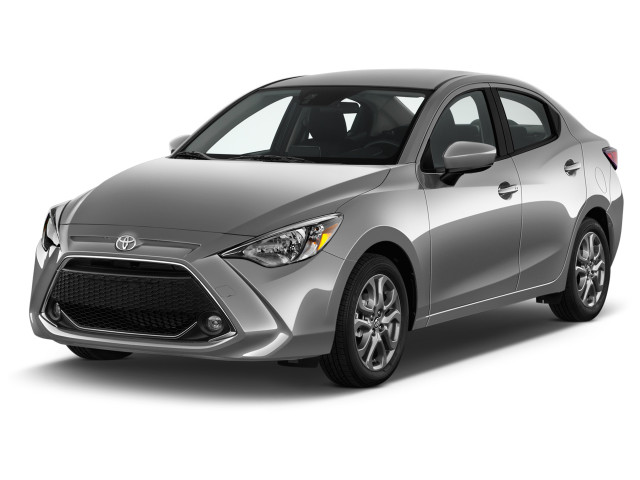 The Toyota Yaris subcompact sedan and hatchback are among the most affordable cars on sale today. It competes against the Nissan Versa, Kia Rio, Mitsubishi Mirage, Honda Fit and Hyundai Accent.

The current four-door Yaris sedan and five-door hatchback are built under contract by Mazda and mechanically similar to the Mazda2, which isn't sold in the U.S.

For 2020, the Yaris sedan is largely a carryover but comes standard with a 7.0-inch touchscreen, Apple CarPlay and Android Auto compatibility, and automatic emergency braking that can stop the car at speeds under 12 mph. The redesigned 2020 Yaris hatchback comes with a 6-speed automatic transmission only and 16-inch alloy wheels.

The Yaris remains one of the lightest vehicles in this class, at around 2,300 pounds, making it seem like a good choice for those who want a light, tossable subcompact. Yet, in an extended drive we found its 106-horsepower 4-cylinder engine to be underwhelming. That said, sporty SE models get a stiffer suspension for a more responsive feel (plus four-wheel disc brakes). Engine noise remains an issue at highway cruising speeds, and we've found the current Yaris to be fuel efficient in the city, but no standout for mileage on the highway. The EPA has rated the Yaris at only 30 mpg city, 36 highway, 32 combined when paired to an automatic transmission. The new Yaris is strong on safety, with nine standard airbags, but lacking options such as heated seats and touchscreen navigation. Bluetooth hands-free features are delightfully simple, though, and USB ports and aux plugs are standard for all.

With new styling, the current Toyota Yaris hatchback goes in a somewhat sporty, but also somewhat more ubiquitous direction, losing some of the Euro-chic charm of the previous hatchback. It does gain a few inches of length, for better cargo capacity especially. Engines and transmissions essentially carry over unchanged from the previous generation, but interior design and ergonomics are quite different, with gauges moved back directly in front of the driver and seats getting more generous bolstering.

The Yaris was refreshed for the 2015 model year, which brings even more aggressive styling to go along with the new faces being grafted on most other Toyota products. Changes included more soft-touch materials inside, a retuned suspension, and some added feature content. Toyota made further tweaks to the infotainment offerings as well, including a dealer-installable navigation system that somewhat makes up for the lack of a factory solution.

For 2018, Toyota slightly resculpted the front and rear bumpers of the Yaris hatchback, but largely left the two models alone.

The 2020 Yaris is built in Mexico and shares its architecture, powertrain, and interior styling with the Mazda 2 subcompact.

The first-generation Yaris, sold in the U.S. from 2006 through 2011, supplanted the homely Echo in Toyota's lineup and was lauded—especially in hatchback form—for its more stylish, urban-chic appearance. Initially, the Yaris was offered either as a three-door hatchback or a four-door sedan, each with its own set of interior and exterior design details. While the hatchback had a more radically styled instrument panel, with a thin center stack and central speedometer, the sedan came with a more conventional look. Likewise, the Yaris hatchback received different front-end details that made it look cuter in the opinion of many, whereas the sedan's front end and proportions were closely related to the contemporary Camry's and Corolla's.

Both models came with the same engine—a 106-hp, 1.5-liter 4-cylinder paired with a 5-speed manual or 4-speed automatic transmission. In either version, this worked out to be plenty to move the lightweight Yaris quickly—though the automatic cars were a little sluggish with a full load. The first Yaris was sprightly and maneuverable around town—and capable of fitting into some of the tightest parking spaces—with light, responsive steering and compact dimensions, but its soft suspension calibration meant that it didn't feel sporty on a country road. Ride quality was soft and absorbent, with a bounciness that came out on some road surfaces.

While the interior of the 2006-2011 Yaris was stylish, it made clear concessions to cost in the materials and trims that were used. There were hard, scratch-prone plastics throughout, and the upholstery felt bargain-basement. Sedans were more than a foot longer than hatchbacks; they didn't have that much more leg room, but getting in was a lot easier, and they did have a surprisingly roomy trunk. For 2009, Toyota introduced a five-door hatchback body style, which some might find the best compromise between the hatchback's stylish appearance and the sedan's practicality.

Equipment on that original base-model Yaris hatchback was basic. Air conditioning and keyless entry were included in all models, but nearly all other common features—such as power windows—were optional, while cruise control was only offered on top models. Safety wasn't a strong point for this Yaris, with crash-test scores unimpressive and many cars leaving the factory without anti-lock brakes. ABS became standard along with electronic stability control for 2010.

The Yaris was closely related to the Scion xA and somewhat related to the Scion xD; the xD in particular has more appealing interior materials, as well as a stronger 1.8-liter engine from the Corolla, but it burns more fuel as a result. The Yaris has proven to be one of the most reliable vehicles on Consumer Reports' annual survey, has good resale value, and has been rated as being among the cheapest to own, considering aspects like insurance, maintenance, and depreciation.

Rate and Review your car for The Car Connection! Tell us your own ratings for a vehicle you own. Rate your car on Performance, Safety, Features and more.
Write a Review
2016 Toyota Yaris 5-Door Liftback Manual SE (GS)

To be my first Toyota, this model (called ETIOS in my Country) is a very well done car.
people found this helpful.
Was this review helpful to you? Yes
2015 Toyota Yaris 3-Door Liftback Manual L (Natl)

Our Yaris is an excellent commuter car that is completely reliable and economic.