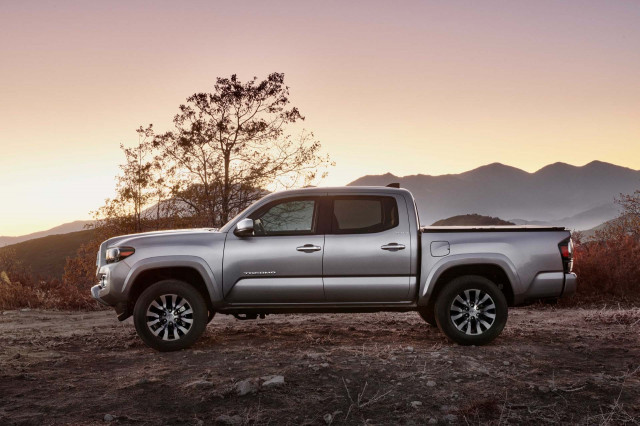 The Toyota Tacoma is a mid-size pickup truck that is equally ubiquitous and useful. Its name has evolved over decades from Hilux to the aptly named Pickup, the Tacoma now spans a wide range of trim levels for shoppers.

With the Tacoma, Toyota has had a long-running mid-size truck that has appealed to buyers unwilling to shell out mega-bucks for full-size pickups. The Tacoma has been joined by rivals from General Motors, Nissan, and it will soon be joined by Ford in offering a smaller, more affordable option for a pickup.

The 2020 Tacoma debuted at the 2019 Chicago Auto Show with a few worthwhile feature updates: a power driver's seat is standard on SR5 and higher trims, the available keyless ignition system now features a sensor on the passenger's door, and the TRD Pro off-road truck features lighter wheels with a retuned suspension.

Toyota introduced a heavily updated Tacoma for the 2016 model year. Along with the usual styling and feature updates, the 2016 truck received a new Atkinson-cycle 3.5-liter V-6 with direct and port injection, which improves fuel economy. The V-6 is available with either a 6-speed manual or automatic transmission, while the base 4-cylinder carries over and goes automatic-only.

The Tacoma is offered extended and crew cab body styles and a choice of short and long composite beds. Both 4-cylinder and V-6 engines are available and most models offer a choice between automatic and manual transmissions.

For 2018, Toyota added automatic emergency braking to the Tacoma, as it applies the technology across its lineup. In 2019, the off-road TRD Pro edition added Fox shocks to enable better high-speed off-road capability.

Ever since the introduction of the original Tacoma for 1995, the model has maintained a loyal set of owners by offering different body styles, powertrains, and, especially, a few special editions targeted at off-roaders.

In its first generation, which ran from 1995 to 2004, the Tacoma got power from 2.4-liter and 2.7-liter 4-cylinders as well as a 3.4-liter V-6; output ranged from 142 hp to 190 hp. It always offered a choice of rear- or four-wheel drive, in either regular or extended cabs, with two different bed lengths. In the 10 years it was on sale, the first Tacoma received some aesthetic updates as well as several special edition packages.

The current Tacoma arrived in the 2005 model year, and it was carried through to 2015 with remarkably few major changes. It came a wide variety of configurations: Regular Cab, Access Cab, Double Cab and X-Runner models. All three were available with either short or long beds, and two- or four-wheel drive, in a range of trims and equipment levels. The two engines are a 159-hp 2.7-liter 4-cylinder engine, and a 236-hp 4.0-liter V-6. Since its launch, towing capacity has risen from 5,000 pounds to today 6,500 pounds in the suitably equipped V-6 model.

The base regular cab truck came with minimal features, but offered a choice of 4-speed automatic or 5-speed manual transmissions. The popular, work-ready 4x2 "low boy" model was discontinued after 2015. Models equipped with the V-6 were available with either a 6-speed manual or 5-speed auto. Above the standard trim was the PreRunner specification, which adds several off-road-friendly features, including overfenders, skid plates, mudguards, and upgraded wheels and tires. Inside, the trucks see upgrades correlated to cab sizes, with the larger models adding more luxurious seating, more folding-seat arrangements, and more power accessories. The range-topping Double Cab models add rear-seat amenities including cupholders, heating ducts, and a 60/40 split-folding rear bench seat.

The X-Runner is a special high-performance version of the Tacoma, offering stiffer suspension, larger alloy wheels and summer tires for better on-road performance, as well as a body treatment to match.

In recent model years, Toyota has added more off-road-oriented options with T|X and T|X Pro packages in addition to the PreRunner, X-Runner, and TRD Off-Road Package. Also, for the 2012 model year, Toyota expanded the number of 4-cylinder Tacoma models and gave these trucks a light refresh, with a somewhat different grille, and less brightwork inside. The orange interior lighting was replaced with blue, and a new standard sound system included six speakers, Bluetooth hands-free capability, and a USB/iPod port.

Also added for 2012 were an available navigation system with real-time traffic and weather, accompanied by a new premium system with HD Radio and Bluetooth audio streaming.

No changes were made to the Tacoma for the 2013 model year; Toyota discontinued Tacoma Regular Cab models after 2014.

For 2015, Toyota offered a TRD Pro package for the Tacoma, as well as the 4Runner and Tundra. On the smaller truck, it includes an off-road-ready wheel-and-tire package, a new exhaust, upgraded suspension components, and a unique front end, with a different grille and a hood with a scoop. The TRD Pro is aimed at more serious off-roading and trail running.

Rate and Review your car for The Car Connection! Tell us your own ratings for a vehicle you own. Rate your car on Performance, Safety, Features and more.
Write a Review
2018 Toyota Tacoma TRD Sport Double Cab 5' Bed V6 4x4 MT (GS)

This is not your Father's Toyota ...

Horrible experience with these people, they care nothing about loyal toyota customers and do what is best for toyota. Toyota was once a very good car maker but in the last ten years they have become arrogant and self serving. Their product suffers as well, the days of toyota reliability are long over. My 2017 Tacoma has had an Entune problem since day one. The problem is well documented but toyota provides warranty service in name. Look to another brand if you can.... + More »
people found this helpful.
Was this review helpful to you? Yes
For 2018 Toyota Tacoma

Think hard before you buy this truck!