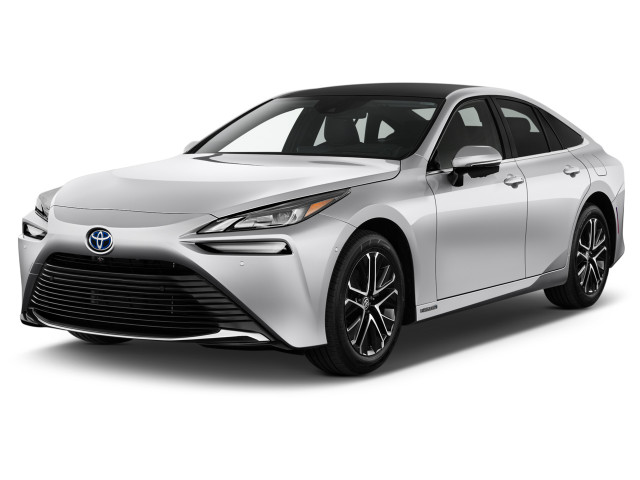 The Toyota Mirai is a hydrogen-powered, five-seat sedan sold only specific markets within California and Hawaii. The Mirai is offered in very limited numbers, according to the limitations of the required hydrogen infrastructure.

"Mirai" means "future," although it's unclear if there's much of a future for hydrogen-powered cars in the U.S. with the proliferation of electric cars and a push from Toyota and other companies to emphasize fuel-cell tech for larger vehicles and commercial-sector solutions.

Only the Honda Clarity Fuel Cell, Hyundai Nexo, and the Mirai offer a hydrogen powertrain in any significant capacity.

The biggest selling point of hydrogen fuel-cell vehicles is that they can be refueled to provide 300 miles of range in less than 10 minutes. Even a Tesla Supercharger DC fast-charging station takes 20 to 30 minutes to provide an 80-percent recharge, for perhaps 200 miles; DC fast-charging sites for lower-range electric cars provide fewer miles in the same time.

The Mirai packs a fuel-cell stack under the hood. Three cylindrical hydrogen tanks—holding about 6 kg of the gas altogether—feed the stack, which produces electrical power, buffered by a 1.2-kwh battery pack. The Mirai delivers 182 hp and 221 lb-ft through a rear-mounted electric motor.

Reconceived on the platform of the Lexus LS flagship, the Mirai has a racy roofline and sport-sedan stance, combined with calming, mature details throughout. Although it's not quick-accelerating, the Mirai rides and handles with grace and has particularly precise steering.

It's also equipped the Mirai as something closer to a luxury car this time around, while lowering the base price to about $50,000. Top Limited versions add heated and ventilated seats and a fold-down armrest/console in back.

The first-generation Mirai was polarizing—and not typically in a good way. It was a fastback sedan with a vestigial trunk, sharp accent lines and creases, a floating hood, and enormous gaping openings at the front to cool the various components of the powertrain. Frankly, its dissonant lines and shapes made it the ugliest car sold in the U.S. today.

The interior design of the first-generation Mirai looks rather like an updated Prius, with three display screens that say "Futuristic!", but work well once you learn the car's quirks. Front and rear seats are comfortable enough, but it has only four seating positions—to keep the weight of a fifth passenger from reducing its range. It came with a 312-mile range rating, and it could 67 MPGe, or Miles Per Gallon Equivalent, meaning the distance a Mirai can travel on the amount of hydrogen fuel with the same energy content as one gallon of gasoline. For reference, that's about half the efficiency of the BMW i3, the most energy-efficient electric car sold in the U.S.

On the road, the Mirai behaves just like an electric car up to about 30 mph, with strong, smooth acceleration and only a few subtle extra mechanical noises in the background. Its handling is acceptable, but numb—much like the current generation of Prius. The fuel-cell vehicle is far from a car that invites you to throw it around twisty mountain roads, but it serves as perfectly viable transportation if you're within range of a fueling station.

Be the first one to write a review on 2021 Toyota Mirai
Rate and Review your car for The Car Connection! Tell us your own ratings for a vehicle you own. Rate your car on Performance, Safety, Features and more.
Write a Review