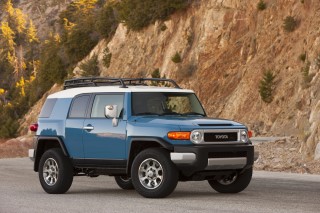 The Toyota FJ Cruiser is a mid-size SUV that has a vibrant design and some of the most impressive off-road capability in the Toyota range. It was offered from the 2007 through 2014 model years, and competed with the Nissan Xterra and Jeep Wrangler with its simple, bare bones interior design.

With its retro exterior inspired in part by the 1960s-era Toyota FJ40 Land Cruiser, crossed with modern cues from Toyota's newer sport-utility vehicles—and an odd design that involves small rear-hinged back doors—the FJ Cruiser makes a rugged yet fashionable statement for those who want to take to the trail and look good in the process.

Under that showy exterior are the bones of a true, modern SUV. With most of its underpinnings shared with the previous-generation (pre-2010) Toyota 4Runner, the FJ Cruiser packs a 4.0-liter V-6 engine making 239 horsepower and 278 pound-feet of torque, along with a sturdy off-road-oriented four-wheel drive system, which includes a low range. Helping out the 4WD system is a set of electronic aids that add finesse, control wheelspin, and help distribute torque—altogether called A-TRAC. Thanks to lots of ground clearance the FJ can ford up to 27.5 inches of water, and great approach and departure angles allow precarious rock-scrambling without damage.

With either a five-speed automatic or six-speed manual transmission, the FJ Cruiser isn't downright quick on the road; accelerates well enough from a standing start but could use a little more passing power for some drivers. Highway cruising isn't the FJ's forte; it's noisy on multiple counts, with road and tire noise combining with some wind noise. And in the city, although the FJ has a manageable size, you might find visibility difficult. On a curvy road, its 4,300-pound curb weight gets in the way of any quick changes in direction and ride quality is a bit busy but not too jarring.

Inside, the Toyota FJ Cruiser has nice front seats and a good driving position, though the small rear-hinged back doors don't make access to the back all that much easier and the back seats are almost unusable. There's a decent amount of cargo space in back, but the floor is rather high and the side-hinged tailgate isn't always convenient.

The Toyota FJ Cruiser hasn't really changed much since its 2007 model-year introduction. Side airbags were made standard for 2008, and in 2009 the FJ got a helpful available rearview camera setup. Intuitive Park Assist is now also available. The one blemish in the FJ's safety record has been its only 'acceptable' performance in roof strength, related to rollover protection.

Not much else has changed for the FJ Cruiser in recent model years, although some accessories and special editions have made it even more off-road focused.  For 2010, Toyota added a Trail Teams Special Edition package that includes some of those items and more interior equipment. A Toyota Racing Development (TRD) package also includes Bilstein off-road shocks, special rims and all-terrain tires, a performance exhaust, rock rails, and appearance upgrades.

In the 2014 Toyota FJ Cruiser, the color palette was changed to add details like blacked-out bumpers to the Trail Teams package--with new Radian Red and Cement Gray, both with contrasting trim.

Rate and Review your car for The Car Connection! Tell us your own ratings for a vehicle you own. Rate your car on Performance, Safety, Features and more.
Write a Review
2012 Toyota FJ Cruiser 4WD 4-Door Automatic (GS)

its a trail teams only 90 came in canada

many options new sound system, borla duel exhaust with headers, cold air intake, alarm system from toyota, tag and replacement insurance until juin 2019.. Selling it for $39,000 canadian has only 92,000 km.
people found this helpful.
Was this review helpful to you? Yes
For 2012 Toyota FJ Cruiser

good car and good interior and exterior. but noisy car

I am very pleased