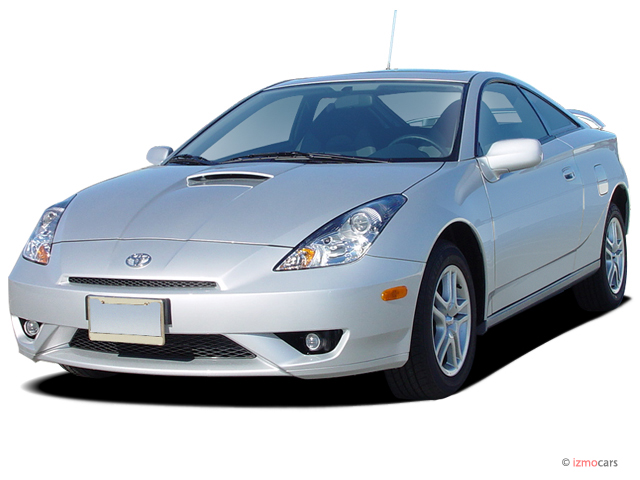 Bengt Halvorson
Senior Editor
The Toyota Celica includes a family of compact sporty coupes and convertibles. Sold through the 2005 model year, the Celica offered strong performance, a relatively affordable price, and good fuel economy; and in its last iteration it took on the likes of the Volkswagen GTI, Acura RSX, Mitsubishi Eclipse, and the earlier Ford Focus ST. Earlier on, it was a top rival to the Honda Prelude, along with others like the Ford Probe and Dodge Daytona.

Through its nearly four decades (depending on the model year), the Celica was offered in several different body styles—liftback (hatchback) coupes; a notchback coupe with a trunk; and a Convertible.

Used-car shoppers will find plenty of those last seventh-generation Celica Liftback models on the market. Sold from the 2000 through 2005 model years, this front-wheel-drive coupe was a bit lighter than earlier Celicas (actually below 2,500 pounds) and felt very peppy with its 140-horsepower, 1.8-liter four-cylinder engine. The five-speed manual was by far the best way to enjoy the charming, rev-happy engine; a lot of Celicas were produced with a four-speed automatic transmission, but it takes away some of the fun. While most will find a great driving position, the low-set cabin was tight for taller drivers and the back seats weren't all that usable.

Those aiming for the most driving enjoyment in this last generation will want to focus in on the top-performance Celica GT-S. It instead is powered by a special 180-hp version of the 1.8-liter, with variable valve timing and more of a performance tune; a six-speed manual gearbox here helps make the most of it. At that time the Celica's handling and enthusiast-oriented qualities were at a peak, although sales failed to meet expectations.

By 2005, the Celica had been winnowed down to two trims, with the Celica GT including air conditioning, power mirrors, a rear defogger, and a cassette/CD sound system. GT-S models added power windows and locks, fog lamps, four-wheel disc brakes, alloy wheels, a rear wiper/washer, and a premium sound system.

All six Celica generations prior to that most recent one can fit essentially into two groups: rear-wheel drive and front-wheel drive. From 1971 all the way through 1985, the Celica was a rear-wheel-drive coupe, with a reputation for being very reliable although not always the sharpest performer. Beginning with the Celica's conversion to front-wheel drive, the model started sharing some of its powertrain components with the Camry and with the versions through the 1990s, the Celica became heavier and more comfort-oriented. These models have held onto the previous models' strong reputation for reliability and long-haul durability, although they're hardly sports cars.

During some model years through the 1990s, Toyota also offered All-trac (four-wheel-drive) versions of the Celica; this wasn't a performance-oriented system, rather one that could help in foul weather (at the expense of fuel economy). In the 1990s, the Toyota Supra adopted a performance all-wheel drive system and became a true sports-car counterpart to the sporty Celica.

Today, the rear-wheel-drive, back-to-basics Scion FR-S essentially picks up not with those '90s cars but where that lighter, friskier last Celica left off.

Rate and Review your car for The Car Connection! Tell us your own ratings for a vehicle you own. Rate your car on Performance, Safety, Features and more.
Write a Review
2005 Toyota Celica 3-Door LB GT Manual (Natl)

I've owned generation 7 for 5 years,and had no issues with it nether broken down etc
people found this helpful.
Was this review helpful to you? Yes
2000 Toyota Celica 3-Door LB GTS Manual

The most underrated sports compact on the planet

The excitement comes when you hit 6000 rpm when it's on the high cam and Jackie Clan like power surge to the 8400 redline. What a thrill, there's nothing quite like the powerband of the 2ZZ GE engine. Used one's are a bargain. + More »
people found this helpful.
Was this review helpful to you? Yes
2000 Toyota Celica 3-Door LB GT Manual

My car is Toyota Carina 1.8SI which is a grand looking & can move around anywhere with new cars

I selected Toyota celica from the list as Carina was not listed there.Close equivalent is Celica I suppose.
people found this helpful.
Was this review helpful to you? Yes
See More Reviews