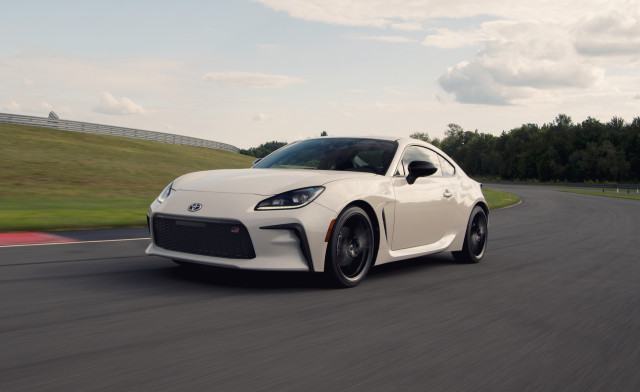 The 86 is a collaboration with Subaru that produced the Toyota version and the Subaru BRZ. The 86 began life as a Scion FR-S (in the States, at least) but changed names after that brand was shuttered. For 2022, it adopted the "Gazoo Racing" GR initials.

The Toyota 86 and Subaru BRZ are very similar and share a 2.4-liter boxer 4-cylinder spinning out 228 horsepower. That's just enough to make the 86 a fun little sports car that can compete with the Mazda Miata, and perhaps even the Ford Mustang.

The Toyota 86 started as the Scion FR-S for the 2013 model year. It proved itself to be one of the best new cars on the market, and accordingly, it made it to the final cut of Motor Authority's Best Car To Buy 2013 awards.

With the changeover to the Toyota brand for the 2017 model year, the car also received some other updates.

Peak output from the car’s 2.0-liter engine rose by 5 hp and 5 pound-feet of torque to 205 and 156, respectively. The standard 6-speed manual (a 6-speed automatic is also offered) gained some new gear ratios for better performance. Toyota also revised the shock and spring rates to make the car bite into corners better up front and hold the road better in the rear.

On the outside, the car sported new bumpers that give it a wider, more aggressive stance.

For the 2022 model year, Toyota thoroughly revised the 86 with a bigger engine, new suspension tuning, and a revamped interior. The 2.4-liter flat-4 implanted under its hood generated 228 hp, and delivered it to the rear wheels via a 6-speed automatic or manual transmission. Toyota promised 0-60 mph times of 6.1 seconds for the manual car, nearly a second lower than before—thanks to the GR86's still-trim curb weight of about 2,800 pounds and to better torque delivery in the midrange from the new engine. The combination made for an entertaining, if not quite thrilling, driving experience. Fairly skinny tires on the base model allowed the driver to easily overpower the grip with the engine's modest torque output and steer the car with the rear wheels; better stick came with the optional 18-inchers.

Inside, the 86 offered a youthful, modern design and a minimalist ethos that put the emphasis on driving. However, a big 8.0-inch touchscreen factored into the cabin for infotainment, complete with Apple CarPlay and Android Auto. Toyota offset that concession to daily drivers with a free year of weekend-racing membership that included a day of driver training at tracks across the U.S.

Rate and Review your car for The Car Connection! Tell us your own ratings for a vehicle you own. Rate your car on Performance, Safety, Features and more.
Write a Review
For 2017 Toyota 86

its a 5 star nuff said