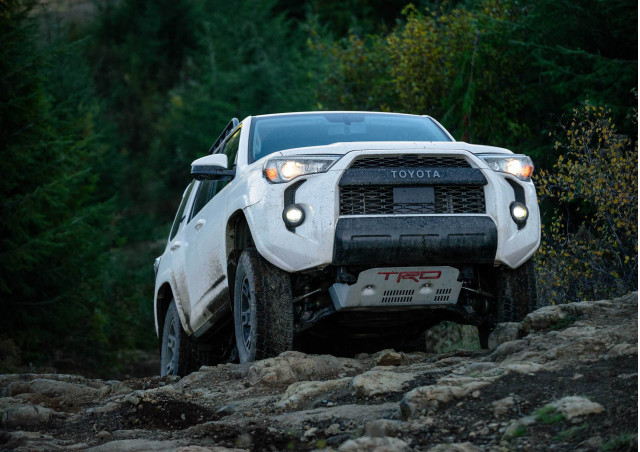 With the 4Runner, Toyota has an off-roader for fans pining for a ladder frame and locking differentials. Its trade-off is in efficiency and comfort, although the 4Runner is available in some tony trims. For 2020, the 4Runner lineup adds some much-needed safety and convenience tech.

The 4Runner doesn't have much competition left; the Nissan Xterra is extinct, and Toyota's own FJ Cruiser has been discontinued. That leaves the Jeep Grand Cherokee as its closest rival—or, perhaps, a Jeep Wrangler with a hardtop.

With Toyota's car-based Highlander crossover serving the mid-size family utility category, the 4Runner is more of a niche vehicle—it's a tougher and truckier option that stresses the "utility" side at the expense of some comfort and family amenities.

Confused? Think of the 4Runner as the Land Cruiser's little brother (for less than half the price).

The current 4Runner has strong visual ties to the models that came before it, with its long, squared-off body, but it avoids seeming outdated with just the right amount of updates. When this generation was introduced for 2010, it brought the focus back to the 4Runner's off-road and hauling capabilities. Frankly, pundits were generally surprised that Toyota was willing to invest again in its 4Runner nameplate after lukewarm reception to the outgoing model. Yet despite a low-key introduction at the State Fair of Texas auto show in the midst of a global recession and high gas prices, the 4Runner was an immediate success.

A 2.7-liter 4-cylinder was added as the base engine for rear-drive versions (and later discontinued), while the bulk of 2010 models came with a 270-hp 4.0-liter V-6. The V-8 was dropped altogether for that generation and is now available only on the Lexus GX. Four-cylinder 4Runners made do with an old 4-speed automatic, whereas the V-6 was mated to a slightly more modern 5-speed auto.

Underscoring its ruggedness, the 4Runner gained a new Trail Edition to appeal directly to off-roaders; it features the company's Kinetic Dynamic Suspension System, off-road tires, a locking rear differential, and other upgrades. Then there was the Limited model, which carried over the X-REAS system and was loaded with comfort and convenience features. Although the 4Runner is still less fuel-efficient than more modern crossover 'utes, it has been rated highly for safety, and its reliability and longevity are legendary. Like its predecessors, the current model offers a roll-down glass rear window—something of a novelty nowadays.

Changes were very few for the 2013 model year, though it received redesigned audio systems, plus Toyota's Entune services and HD Radio with iTunes tagging, in the 2012 model.

For 2015, Toyota has introduced a new, off-road-focused 2015 TRD Pro 4Runner that attempted to make up for the hole created in the lineup due to the discontinuation of the FJ Cruiser. It included unique suspension tuning, different wheels and tires, aesthetic changes, and a new exhaust.

For 2016, the 4Runner lineup gained upgraded Entune multimedia systems, which in SR5 and Trail models included a navigation system that uses a connected smartphone. The 4Runner also added Siri Eyes Free with all versions of the Entune system. In 2017, Toyota renamed the Trail trim level to TRD Off Road. Only some minor new options packages marked 2018 for the Toyota 4Runner.

The 4Runner has, for the most part, been closely linked to small Toyota pickup trucks, including today's Tacoma. The first 4Runner wasn't much more than a truck with a cap covering some rear seats in what would have been the bed. The version that was introduced for 1996 changed the script, offering a more cohesive design, but retaining much of the underpinnings of the pickup, including the 4-cylinder and V-6 engines.

That particular 4Runner remains in popular today among off-roading enthusiasts. The high-demand models are 1996-2000 versions with the optional pushbutton electronic-locking rear differential and either a 5-speed manual or a 4-speed automatic. The 4Runner was given a light refresh for the 1999 model year and then in 2001 automatic four-wheel drive was made standard (except on the rear-wheel drive models), as was traction and stability control. The differential lock was put on hiatus, while the manual gearbox was dropped entirely.

The 4Runner was redesigned again for 2003, this time becoming significantly larger, more refined, and more lavishly equipped—even though it retained the body-on-frame design. A small, barely usable third-row seat was made optional, and for the first time Toyota offered a V-8 on the 4Runner. The 4.7-liter V-8 actually produced less power than the standard V-6 early on, but its 320 lb-ft torque rating was considerably higher.

While these 4Runners had nice interior appointments, the ride tended to still be rather bouncy and harsh. Several more sophisticated chassis systems offered on the 4Runner included an off-road-oriented hydraulic system and an air suspension on the Limited model, good for towing and improved ride quality. This 4Runner also offered an increased range of convenience options, including a navigation system, a backup camera, and upgraded JBL audio.

Rate and Review your car for The Car Connection! Tell us your own ratings for a vehicle you own. Rate your car on Performance, Safety, Features and more.
Write a Review
2016 Toyota 4Runner 4WD 4-Door V6 Trail Premium (Natl)

Trail Premium knows how to stay on the Trail

It's brand new I love it the radio is incredible

I have thoroughly enjoyed owning and driving this vehicle.