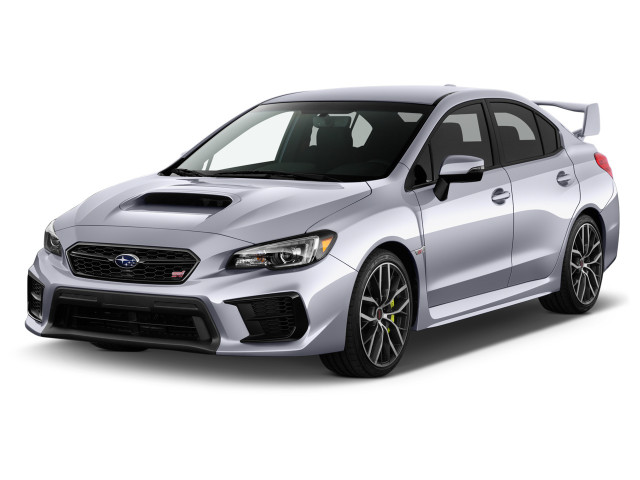 The Subaru WRX and WRX STI are four-door sedan spin-offs of the mild-mannered Impreza sedan. The WRX twins are the bad boys of the lineup. With turbocharged engines and stiffly sprung suspensions and performance-oriented all-wheel drive, they're essentially road-going versions of Subaru rally cars.

The models offer two very different levels of performance. While the WRX is an exciting daily driver, the more extreme WRX STI is closer to a real race car straight out of the factory.

Only a handful of other rivals are offered in North America, including the original hot hatch, the Volkswagen Golf GTI, and the Honda Civic Type R, both lack all-wheel drive. Some also consider the Mercedes-Benz CLA45 as a worthy competitor, but it is in a price category one or two notches above these cars. The GTI-based Golf R has all-wheel drive and it is a worthy competitor for the WRX STI. Same goes for the rally-ready Ford Focus RS.

The new Subaru WRX and STI

New versions of the WRX and WRX STI arrived for the 2015 model year. Both are based on the Impreza sedan, adding the right reinforcements and upgrades to transform the feeling and meld well with the all-wheel-drive system and turbocharged flat-4 engines. Though they may not be beautiful, both models are plenty of fun behind the wheel. Unfortunately, a hatchback body style did not return with this generation.

The WRX stuffs Impreza shell with a lovely 2.0-liter turbo-4, with twin-scroll turbocharging and an intercooler, for a net 268 horsepower. It's coupled to either a 6-speed manual transmission or a continuously variable transmission (CVT), and with different flavors of all-wheel drive, depending on the transmission. The CVT has programming to let it behave like an automatic transmission or a quick-shifting dual-clutch gearbox. The WRX also gets electric power steering and a sport-tuned suspension, all riding on 17-inch, 45-series tires. Subaru makes 18-inch wheels available as well.

WRX STI models get their own engine, a 2.5-liter turbocharged flat-4 that puts out 305 hp; the powertrain is mostly carryover from the last generation. The STI also has some additional chassis upgrades, with beefier brakes, a unique suspension tune, and a more intelligent and complex all-wheel-drive system. As in past versions, the STI has a driver controlled differential, which lets you fine-tune the torque split between the helical front and Torsen rear limited-slip differentials.

The wheelbase of the latest WRX and STI is about an inch longer than their predecessors, so interior space is better. The interior, especially the dash, is more nicely finished than before. This generation also gains almost 2 inches of rear-seat leg room, plus a bit more trunk space. There's no mistaking it for an Audi S4—either inside, or in sticker price—as its economy-car roots still shine through somewhat.

Among standard features, the WRX has automatic climate control, Bluetooth, a flat-bottomed steering wheel that tilts and telescopes, and steering-wheel audio and phone controls. The WRX STI adds suede-insert seats and LED-equipped headlamps.

Though compact cars, neither the WRX nor the STI are fuel sippers. The STI is only rated by the EPA at 17 mpg city, 23 highway, 19 combined. Fuel efficiency has always been the job of the base Impreza, while the WRX and STI offer performance.

The current generation WRX and STI get high marks for roominess, acceleration, and roadholding. Ride is firm but tolerable and almost smooth in the base WRX. Downsides are a high level of cabin noise and an occasionally balky shift linkage on the manual.

For the 2016 model year, Subaru's WRX and STI added the company's exceptional EyeSight forward-collision prevention system. Blind-spot monitors became a new option, and Subaru's Starlink infotainment interface with a 6.2-inch touchscreen became standard on all WRX models. Several other options were added as well, including a small spoiler that can replace the shelf-like wing on STI models.

Changes for 2017 were minor. The headliner is improved and the WRX Limited model added reverse automatic braking when ordered with EyeSight. For 2018, the lineup saw a tweaked exterior look and some revised suspension settings. For 2019, Subaru added Apple CarPlay and Android Auto to the WRX and WRX STI and added a pair of new performance packages for even sharper handling. For 2020, cars equipped with the optional continuously variable automatic transmission (CVT) come standard with automatic emergency braking, adaptive cruise control, and active lane control. Changes were minor in 2021 in advance of a new model expected in the following year.

The WRX first arrived in 2002, and the STI followed two years later as a 2004 model. They were originally offered as two- or four-door sedans, and the five-door hatchback version arrived with the 2008 model year. Many running changes were made over the first few model years, including fender flares for 2005 and new front-end styling in 2006. In the last year of the former generation, a WRX STI Limited model was also launched to add a bit of luxury to the severe standard model. Its amenities included leather upholstery, an optional moonroof, a trunk spoiler, and fog lights.

The second-generation WRX, which arrived in 2008, wasn't well received by its fans in the first model year. They viewed it as underpowered and too softly sprung. Subaru listened to its buyers, and for 2009, the WRX's 2.5-liter turbocharged flat-4 engine got a boost of 41 horsepower, to 265 hp—and the STI was boosted to 305 hp. A 5-speed manual gearbox remained standard, with an optional (and somewhat outdated) 4-speed automatic offered as well. Maximum performance required revving the engines, as both models exhibited a fair degree of turbo lag.

For 2011, Subaru gave the WRX a new look, with flared fenders and a widened track to match the STI, which complemented the overall design. Sound systems were also all-new that year, adding standard USB and iPod connectors plus available satellite radio. While the rest of the Impreza lineup was thoroughly updated for 2012, the WRX and STI continued essentially unchanged into 2013.

Rate and Review your car for The Car Connection! Tell us your own ratings for a vehicle you own. Rate your car on Performance, Safety, Features and more.
Write a Review
2018 Subaru WRX Premium Manual

fun to drive,great all weather beast