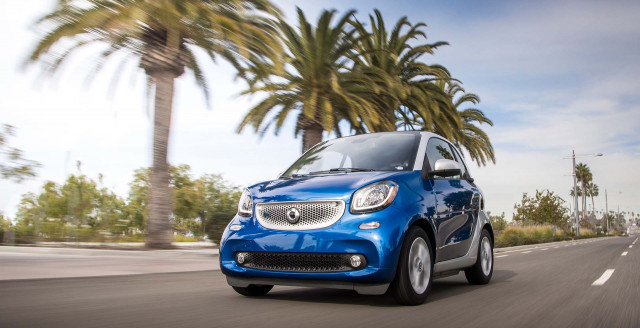 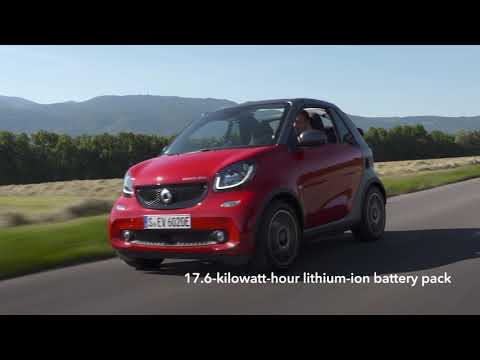 The Smart Fortwo was a very small coupe or convertible sold in the U.S. by Mercedes. Its small size was a boon to parking and maneuverability, but not necessarily any other car-related function.

For 2018, parent-company Mercedes-Benz looked for a new approach as it axed the gasoline-powered Smart models in favor of a battery-only lineup. The Smart Fortwo with electric power rated only 58 miles of range.Versions in 2019 were identical to the year before it.

In 2019, Mercedes-Benz announced it would no longer import new Smart vehicles to the United States or Canada, bringing an end to the decades-long experiment in microcars for North America.

The Fortwo, which had been offered in coupe, cabriolet, and electric models, had the distinction of being the smallest highway-legal car ever sold in the U.S. Though the little Smart was on sale in the U.S. for 10 years, it never sold particularly well and its chief rival in the U.S., the Scion iQ, was no longer available by the time the Fortwo was discontinued.

The Smart Fortwo was redesigned for 2016, the first complete redesign the model received since the brand was launched in 1998.

The new generation of Smart Fortwo held fast to a length of slightly less than 9 feet long, but was roughly four inches wider. The tiny proportions gave the Fortwo the best turning radius, at 22.8 feet curb to curb, of any car on the market. The short length meant it continued to slot into the smallest of parallel spaces.

The profile didn't change much either. The last Fortwo had the same snub nose, perky styling, and clearly defined passenger compartment, with wheels pushed out to the corners and side styling accented by the contrasting color. Design features carried over from the previous Smart included the prominent shoulder line, frameless door windows, and a split tailgate whose upper portion opened for access while the lower half flipped down to provide a temporary surface.

The front end was definitely more defined and bulbous than before—partly a result of tougher pedestrian-safety requirements. The interior was a bit more visually interesting than in the previous models, but still fairly simple. Two eyeball vents sat on top of the dash, and a small instrument cluster behind the wheel contained the usual gauges. A touchscreen display sat slightly proud of the central console, and overall, the interior had a far more substantial feel.

The base Pure model (offered only in coupe guise) included power windows, central locking, LED daytime running lights, cruise control, power steering, and audio and other controls on the steering wheel. The audio system included a CD player, Bluetooth streaming for playing music and hands-free commands. The instrument cluster included a 3.5-inch color display, and a trip computer and an exterior temperature display were also standard. Beyond that, the Passion, Prime, and Proxy trim levels provided a mix of different features, using interior trim and fittings to give the different models distinct characters.

Infotainment options in the Fortwo lineup included smartphone integration and a navigation system with real-time traffic and weather data. The Smart Cross Connect app allowed owners to access their car and other useful functions while away from the vehicle. A top-end JBL sound system with eight speakers and a 240-watt amplifier provided substantial sound for the small cabin.

The ForTwo Electric Drive did 0 to 60 mph in 11.4 seconds, while the Cabrio took 11.7 seconds, according to Smart. Top speed for both models was limited to 81 mph.

After years of hesitation and false starts, Smart launched the Fortwo in the U.S. in 2008, right into the teeth of a gas crisis. It sold like gangbusters in its first two years, but the numbers fell drastically in the years after that, averaging about 10,000 units a year.

The versions of the Fortwo that are being phased out in 2016 were powered by a 70-hp, 1.0-liter Mitsubishi 3-cylinder gasoline engine that was mated exclusively to a 5-speed automated manual. Dimensions were slightly different, along with various changes in materials, trims, and switchgear, but U.S. Smarts kept the rear-engine, rear-wheel-drive configuration. When gently driving and not zipping, the transmission could be obstinate, lurching between gears in indecision. Performance wasn't that impressive if you went by the specs: 0-to-60-mph times were a leisurely 13 seconds or so.

The attributes that made the first Fortwo so appealing in the city conspired to make it less so—and in some cases even a little scary—on the highway. Engine and road noise were excessive at freeway speeds, and while the Smart could cruise at 70 mph or even 80 mph, no one wanted to stay at those speeds for long. The short wheelbase and rather tight suspension calibration that helped it feel so responsive, albeit a little jittery, in the city made it bouncy and busy at higher speeds—it was especially sensitive to crosswinds, while grooved pavement caused noticeable tramlining.

Packaging in the Smart could take some getting used to at first, but it was a brilliantly space-efficient car. Overall, it felt like sitting in a small, exceptionally narrow pickup cab, though a quick look ahead and behind could evoke a sense of vulnerability. This Fortwo performed quite well in crash tests—for its size—and came with stability control, side airbags, and ABS.

A comprehensive interior freshening came in 2011, with a few new features added to the stark cabin decor—at the request, Smart said, of buyers. For 2013, the mildest of upgrades included updated front and rear styling, and moving the Smart badge from the hood to the center of the grille.

Smart offered a handful of Electric Drive cars for lease in 2011. These versions used a low-power electric motor and lithium-ion battery packs from the then-startup Tesla Motors, of which Daimler used to be a shareholder. The Smart ED carried a hefty lease bill and had only 63 miles of range to a charge according to the EPA. Many of the original Electric Drive cars have migrated to Car2Go fleets that are stationed in large cities.

In 2013, the Smart Electric Drive arrived with a new all-electric powertrain. At roughly double the price of the cheapest gasoline Smart Fortwo, it was the least expensive plug-in electric car sold in the U.S. It was also much nicer to drive than the gasoline version, because its single-speed transmission dispensed with the lurching, thudding automatic shifts that made the gasoline car such an amusement-park ride.

The electric Smart performed as well as the gasoline version—its acceleration was actually slightly quicker—and qualified for a $7,500 federal income-tax credit and a $2,500 California purchase rebate, meaning an effective price after incentives of only about $15,000. In some ways, it was the car that the Smart Fortwo should have been all along, as the small car was best suited to short trips in the city anyway.

Rate and Review your car for The Car Connection! Tell us your own ratings for a vehicle you own. Rate your car on Performance, Safety, Features and more.
Write a Review
2017 smart fortwo prime coupe

Great Car and a Niche Car

The 2017 smart fortwo is a DRASTIC improvement over the previous model (2013-2015). It's an entirely different car and, if you're in the market for a small, highly maneuverable, incredibly agile car for the city and light freeway driving, you really should consider a smart. I'm about to get my second one this month.
+ More »
people found this helpful.
Was this review helpful to you? Yes
For 2017 smart fortwo

Better mileage that my M-Class Mercedes!!

It's terrific for what it is! Didn't find anything bad about it! Ready for a second in 2017
people found this helpful.
Was this review helpful to you? Yes
2016 smart fortwo 2-Door Coupe Passion

My fouth Smart 4Two and I love it!!

"U" turns are really fun. + More »
people found this helpful.
Was this review helpful to you? Yes
See More Reviews