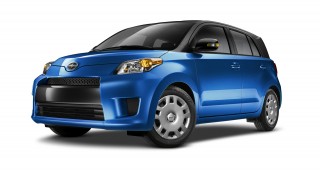 For its seven years on the market, the Scion xD five-door hatchback offers exceptional utility, adequate fuel economy, and a fairly reasonable price--although its feature set eventually fell behind the leading Kia Soul.

Launched in 2008, the Scion xD's last model year was 2014. The square-cut almost-wagon was the successor to a smaller subcompact hatchback from Scion called the xA. The xD's almost menacing front styling and taller stance took it out of the "cute small car" category; many observers likened its frontal appearance to that of a bulldog.

To learn more about the xD, read our 2014 Scion xD review. You can also compare the car to its primary rivals with our comparison tool.

The xD sat tall on 16-inch wheels--you could get even taller optional 18-inch wheels--and both offered more equipment than similar five-door compact cars and presented a different appearance, profile, and personality than milder entries like the Hyundai Elantra GT.

Underneath, the mechanical aspects of the Scion xD were related to those of the Toyota Yaris hatchback. With the Toyota Corolla's 128-horsepower 1.8-liter four-cylinder engine, the xD moved quickly enough with either the four-speed automatic or five-speed manual transmission. It was powerful enough to perform decently with a full load of people and their goods. Fuel economy was only so-so, however, at 27 mpg city, 33 highway; Consumer Reports consistently rated the xD (and its xA predecessor) as among the most reliable new cars.

Considering the xD's very affordable price, the interior appointments were impressive when it launched and stayed competitive for much of its life. The instrument panel was nicely styled and, even if it did heap on the hard plastic, switchgear and controls had a good, tactile feel. Plenty of bins and cubbies were included, along with a dual-compartment glovebox.

Although much of what you got mechanically with the xD is standard-issue, the features list was where it gets interesting. Air conditioning, cruise control, steering-wheel audio controls, a trip computer, power windows, and a first aid kit were all standard, as was a USB input (starting in 2010). The Alpine premium audio option also had an odd interface but added HD radio and a touch-panel display.

Accessorizing was always a major part of the Scion sales process, with more than 40 dealer-installed accessories possible on the Scion xD, including special wheels, trims, and air dams, along with serious performance enhancements like a sport exhaust, quick shifter kit, and brake upgrade. Special Release Series models of the xD—including the RS 1.0 and RS 2.0—were offered each model year; blending special paint colors with a few other extras, available only in a limited run of 2,000 or less.

The sole surprise on the Scion's feature list was that even by 2010 and 2011, when electronic stability control had become standard on the less-expensive Toyota Yaris, it remained optional on the xD (it was finally made standard in 2012). The 2012 model year also brought Bluetooth plus much-improved sound systems with improved interfaces and impressive integrated displays. For 2013, the xD received a number of aesthetic tweaks inside and out, including a new smoked headlight housing, available two-tone exterior metallic paint, and a white gauge face for the speedometer. New equipment for 2013 included an additional driver and front passenger seat cushion airbag, and improved one-step force limiters for the seat belts. The 2014 models continued essentially unchanged.

Although the xD was never quite as lean and fuel-efficient as its predecessor, the Scion xA, it was more settled at highway speeds as well as more surefooted on curvy roads. Low points of the package for many model years included the base Pioneer sound system: Although technically it represented an upgrade from Toyota's own systems in sound quality, it was a confusing mess with respect to function and display.

Be the first one to write a review on 2014 Scion xD
Rate and Review your car for The Car Connection! Tell us your own ratings for a vehicle you own. Rate your car on Performance, Safety, Features and more.
Write a Review