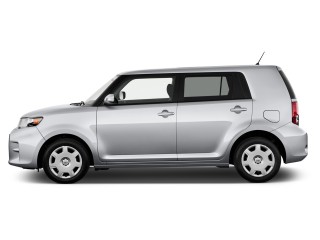 The first-generation Scion xB was a smaller vehicle targeted at younger drivers looking for authentic Japanese-market vehicles. The current model is a larger wagon that has more in common with vehicles like the Kia Soul. But the two generations are distinct for their size, the second-generation xB being much larger.

The xB is likely to be replaced by a slightly different, more conventional hatchback model soon, perhaps in 2016. The new model will be called iM and be based on the Toyota Auris, which is sold overseas. For now, the xB's rivals are really limited to Kia's Soul, as the Nissan Cube was recently discontinued and the Honda Element has also gone out of production. The boxy set has apparently fallen out of favor. Other small hatchbacks and wagons could also be considered competitors, including the Volkswagen Golf and Hyundai Elantra GT and perhaps the Honda Fit.

The xB is a five-door hatchback that's been part of Toyota's lineup since late 2003 when it was introduced as a 2004 model.

MORE: Read our 2015 Scion xB review, and compare the Scion xB to its competitors.

When the xB launched in the U.S. a decade ago, it was the first in a new genre of vehicles. The small, slab-sided 2004 Scion xB subcompact “box” was really the car that launched Scion, Toyota’s youth brand for the U.S. market. The new brand targeted Generation Y buyers (those born between 1980 and 1994) as a way to address the gradual aging of Toyota’s core demographic. To the company’s surprise, the xB outsold the more conventional Scion xA five-door hatchback by almost two to one, and it quickly became the vehicle buyers envisioned when hearing the name “Scion.”

That first-generation xB, sold from 2004 to 2006, was based on the Toyota bB, a Japanese-market model using Toyota Echo/Yaris mechanicals that the company did not expect to export to the States. It came in only one body style, with a plethora of options. But its quirky looks quickly garnered attention for Scion, and buyers loved its combination of generous interior space and a small on-road footprint. The 108-horsepower, 1.5-liter four-cylinder engine (offered with a five-speed manual or four-speed automatic transmission) hardly made it a road rocket, but that wasn’t what the xB was all about. Instead, the xB was highly customizable using not only an extensive array of factory options, but an even longer list of dealer-installed accessories that meant no two xB models were ever quite identical.

The xB can be credited with igniting a trend of boxy small cars. Imitators include the Americanized Nissan Cube and Kia Soul, although Honda's Element arrived at around the same time. Both provided an alternative to smaller hatchbacks from the Japanese and Korean automakers. The first-generation cars are looked on more favorably and are expected to become collectable one day.

That original version was only sold from 2004 through 2006. The second-generation model was launched in 2007 as a larger compact, and continues to sell under Toyota's youth brand, Scion. The current car retains the characteristic boxy looks, and it's affordable so as to appeal to first-time car buyers as well as their empty-nest parents. The current-generation xB hasn't changed much mechanically since its 2007 debut, although there have been small aesthetic modifications along the way.

This generation is a foot longer than the last, 600 pounds heavier, and uses a more powerful engine to compensate. All current xBs are powered by a 158-hp, 2.4-liter four-cylinder engine. Fuel mileage has suffered as a result, losing some of the original model's appeal. There's a very long list of optional accessories available from the dealer, just as before.

The revised xB hasn’t achieved the buzz and cool factor of the first-generation car, nor have its sales reached the same levels. Scion has continued to issue at least one xB “Release series” special model every year since 2004. These limited editions offer unique paint in bright colors and matching interior trim, plus combinations of options and accessories that set them apart from garden-variety xBs. Each Release Series model carries a badge showing its limited-edition serial number.

In 2013, Scion gave the xB a subtle exterior and interior retouch, with a new glossy-black lower grille, and a few other exterior changes. New bronze and chrome accents, and a new seat fabric, were the extent of the interior changes. The goal is to make the xB look a little sportier—including a black rear diffuser and LED accent lighting. For 2012, the company added a standard Pioneer audio system (a 200-watt unit remains an option). It includes iPod / USB connectivity, an auxiliary-in jack, and a subwoofer RCA output for adding external amps, as well as Bluetooth and HD Radio.

Scion made precisely one change for the 2015 model year: A rearview camera is now standard on all models. Otherwise, the lack of updates and improvements continues for Scion's boxy hatch. Now in its ninth model year, the xB is one of the older models in the Scion lineup.

Rate and Review your car for The Car Connection! Tell us your own ratings for a vehicle you own. Rate your car on Performance, Safety, Features and more.
Write a Review
2015 Scion xB 5-Door Wagon Automatic (SE)

Fun car, very practical and versatile, lots of aftermarket upgrades. MPG sucks and it's slow however.

I added some nice 18" Enkei wheels and high performance Dunlop all season tires, had the TRD lowering springs installed along with the rear anti-roll bar and shock tower brace. These really helps the handling and improve the sportiness. The lower stance with the spring kit (especially in the back) really makes the car look much better.

Also upgraded the factory speakers (shout out to Crutchfield) for lots of upgrade options) which helps a lot. You can even upgrade the head unit to new units with Apple Car Play or Android Auto now!

I do like it -not something you see everyday and all the aftermarket parts make it easy to customize. Super practical for hauling stuff and overall a fun car. + More »
people found this helpful.
Was this review helpful to you? Yes
2014 Scion xB 5-Door Wagon Automatic (SE)

Great for a tall person and lots of room for stuff