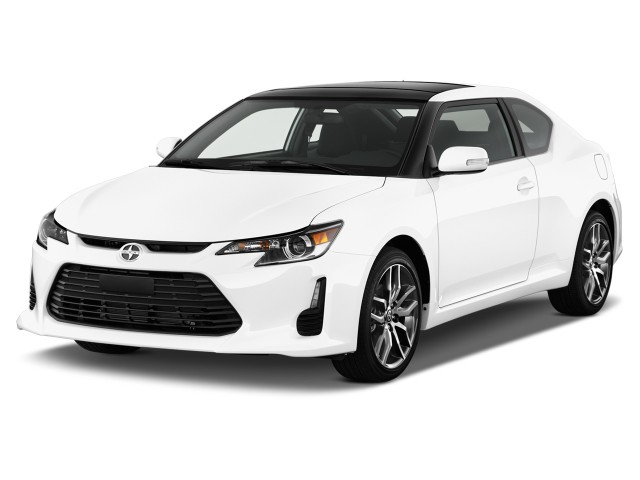 The Scion tC is a two-door coupe with a sporty flair—an increasingly rare type of car. The tC is currently sold by Toyota's youth-oriented sub-brand Scion, but will be folded later this year when that brand ends its run in the U.S.

The first-generation tC was one of the original trio of vehicles that launched Toyota's youth-focused Scion brand in the U.S. back in 2005. The coupe received a redesign for 2011 and has remained relatively unchanged since then.

The tC was joined in 2012 by the rear-wheel-drive Scion FR-S sports car, which has a smaller footprint and more traditionally authentic sports-car handling. While the front-wheel-drive tC remains popular among the tuner crowd, the FR-S is more of a classic sports car.

It has only a few real rivals including the Hyundai Veloster, Kia Forte Koup and the Honda Civic Coupe.

The current tC wears a more chiseled look than the first-generation model—you could consider the design one part Camaro and one part Cylon. The 2012 and 2013 models were changed very little, unless the Zombie Apocalypse edition or the Release Series 8.0 are the kinds of updates that give your automotive life new meaning. The interior of the new-generation tC has a more linear theme as well, but shows some signs of intense cost-cutting.

Second-generation tCs use an uprated version of the original's four-cylinder engine, now displacing 2.5 liters, that is tied to a choice of 6-speed manual or automatic transmissions. A 0-60 mph time of about 8 seconds—7.6 seconds with the manual, 8.3 seconds with the paddle-free automatic shifter—means performance is acceptable, but not mindblowing, while cornering is predictable. Ride quality is much improved in the second go-round, and the electric power steering is nicely tuned. Fuel economy now stands at 23/31 mpg, city/highway with either gearbox.

As before, the tC is snug in front and back, and headroom is tight, thanks to a standard sunroof. Good, sporty bucket seats are big enough for most builds, and the increased leg space in the back seat enabled Scion to let the back bench recline for more comfort. The cargo area can hold a few roll-on bags and has deep bins for storage on the side, as well. The Scion tC scores exceptionally well in crash tests; the NHTSA and IIHS both give it top honors.

Standard features include stability control, power features, satellite radio, and the sunroof. An iPod connectivity kit is included, and an upgrade radio offers 200 watts of power as well as HD radio. Scion has made it a priority to offer a well-equipped car at a reasonably low price for the youth market, so it keeps the number of versions low to save costs and also includes items that might otherwise be optional as standard, such as keyless entry, air conditioning, cruise control, a moonroof, and sport seats. The idea is that buyers will then buy whatever else they want from the dealer as accessories and have money to do so.

Like other Scions, the tC is offered with a long list of dealer-installed accessory possibilities—most of them fully covered under the factory warranty. They include both cosmetic options like a rear spoiler or carbon-fiber trim, as well as far more serious Toyota Racing Development  accessories such as a supercharger kit, a performance exhaust, and strut-tower braces.

The tC was updated in 2014. it received a restyled front-end appearance, LED running lamps, improved interior materials, a few suspension changes, and downshift rev-matching for the automatic transmission. A 2014 Scion 10 Series tC celebrated the brand's tenth anniversary and received a few additional features, including dual-zone climate control and push-button start. For the 2015 model year, the tC received two new color options: Blizzard Pearl and Cosmic Gray. It was unchanged for the 2016 model year.

Scion's original Scion tC, launched for 2005, was essentially a U.S. model derived from the underpinnings of the Toyota Avensis, a vehicle that had already met some success in Europe. It paired the torquey 161-hp, 2.4-liter four-cylinder engine from the Toyota Camry with the excellent handling and straightforward interior of the Avensis. The tC offered a near-ideal combination of practical and sporty, upscale attributes to appeal to younger coupe buyers on a budget—though, despite that, it's not sold in Japan under any name.

The tC's exterior had a sleek, handsome appearance and a more expressive cabin compared to most of Toyota's interiors, and the cockpit-like instrument panel had impressive materials and nice, tactile switchgear that wouldn't have been out of place in a more expensive car. The tC had a snug cabin, though. Headroom was tight in front, and while three could theoretically wedge into the backseat, it was too narrow to be at all comfortable.

This front-wheel-drive tC felt especially perky with the standard five-speed manual transmission, though it was only adequate with the four-speed automatic. Thanks to good, communicative steering and a firm but comfortable ride, the first tC was entertaining to drive. Fuel economy was slightly disappointing, with EPA figures that were worse than in many mid-size cars at 20/27 mpg, city/highway for manual-transmission models.

Rate and Review your car for The Car Connection! Tell us your own ratings for a vehicle you own. Rate your car on Performance, Safety, Features and more.
Write a Review
2015 Scion tC 2-Door HB Manual Release Series (Natl)

Best car I haver ever owned!

very versatile and fun to drive

Love it! Lots of space in the back with the seats folded down. Easy to drive .
people found this helpful.
Was this review helpful to you? Yes
2015 Scion tC 2-Door HB Manual (Natl)

Met my expectations. Handling is very precise and the 30.5 mpg was a bonus. I have owned Mazda 5, Mini Cooper and other sports cars but this is better all round
people found this helpful.
Was this review helpful to you? Yes
See More Reviews